In one of his most concrete moves to liberalize the economy, Duterte has directed his economic managers to throw their weight behind efforts to ease limits on foreign ownership in eight sectors such as retail, construction and teaching in higher education.

The move is part of a periodic review of the country's Foreign Investment Negative List, which enumerates industries where foreign ownership is prohibited or limited.

For instance, no foreign equity is allowed in mass media except for recording and retail enterprises with paid-up capital of less than $2.5 million. Meanwhile, only 40% is allowed in activities related to exploration of natural resources, operation of public utilities and land ownership. 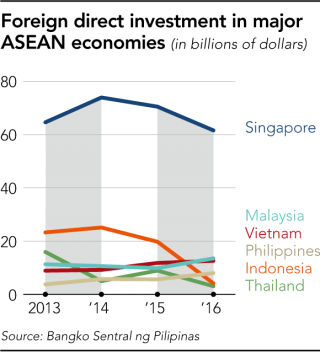 Although the directive did not specify a deadline or the extent of liberalization, it asked economic managers to "earnestly support, in a coordinated manner, such legislative efforts" to relax restrictions, including a bill "seeking to clarify the definition of public utilities," according to a Nov. 21 memorandum order that was made available to media on Nov. 23.

One way to redefine public utilities is to exclude the telecommunications sector, in which foreign ownership is limited to 40%.

Duterte's memorandum order came after he personally offered to Chinese Premier Li Keqiang during their bilateral meeting in mid-November to grant China "the privilege to operate the third telecoms carrier in the country," presidential spokesperson Harry Roque said on Nov. 20.

The country's $5.3 billion telecom industry currently has only two major players: PLDT, which is backed by Japan's NTT Group, and Globe Telecom, a joint venture between Singapore Telecommunications and Ayala Corp., a local conglomerate.

Prospects for a three-way competition dimmed last year after Australian telecom Telstra canceled a planned joint venture with San Miguel, which prompted the beer-to-infrastructure conglomerate to sell its telecom assets to PLDT and Globe, thereby cementing the duopoly.

Despite acquiring additional frequencies and deploying additional capital, both carriers have been heavily criticized for poor internet service.

"The telecoms duopoly is about to end with the ... offer by the president to the People's Republic of China to operate the third telecoms carrier," Roque said.

"I think there is certainly an interest from Chinese telcos, but it still boils down to how attractively the Philippine government would like to position this," Chong told the Nikkei Asian Review. She said China Telecommunications and China Mobile, which have strong balance sheets, are possible candidates.

Duterte's allies in Congress in September approved in the third and final reading a bill excluding the telecommunications sector from the definition of public utilities. A separate version needs to be approved in the Senate before Duterte can sign it into law. 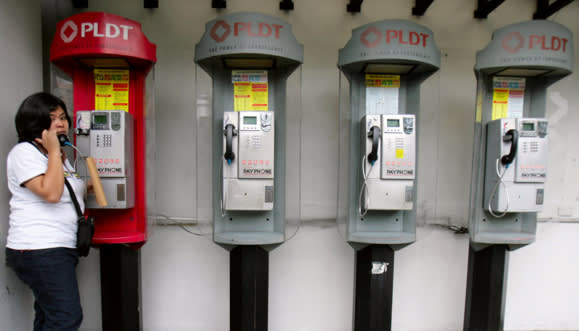 PLDT is currently one of only two major telecom players in the Philippines.   © Reuters

Duterte has previously said he would open the telecom and power sectors to foreign players to improve public services. In his Nov. 21 memo, he said relaxing foreign ownership restrictions would "raise the Philippines' level of competitiveness."

Carlo Asuncion, chief economist and assistant vice president at Union Bank of the Philippines, said the move was a "step in the right direction" for the country, which has "always been a laggard" when it comes to foreign direct investment in Southeast Asia. Asuncion expects investors to look at the country's macroeconomic fundamentals rather than human rights issues tied to Duterte's bloody war on drugs, a key concern for American and European investors.

Such issues, however, have not been raised by Asian neighbors, which Duterte has chosen to embrace.

From bridges to railways, China has shown an eagerness to fund Philippine infrastructure projects since Duterte, who came to power last year, abandoned the hard-line policy of his predecessor, Benigno Aquino, in the South China Sea territorial dispute.

During the same meeting at which Duterte offered the telecom deal, Li proposed a 10-year economic cooperation between China and the Philippines.

Meanwhile, at least one lawmaker has opposed giving China an exclusive right to break the telecom duopoly. Senator Bam Aquino, a cousin of the former president, praised Duterte's effort to improve the telecom sector through competition. "But we should not be limited to a single country," he said.

But Duterte's spokesperson said the Philippines' diplomatic leverage should not be wasted.

"Consider also the proximity and the fact that we want to avail [ourselves] of as much economic advantage [as] we can, arising from the renewed friendly ties with China," Roque said.