MANILA -- It was a rare occasion in January that saw the heads of some of the largest corporations in the Philippines meet with President Rodrigo Duterte, who as a candidate last year made so much of refusing business funding for his election campaign.

Over dinner at Malacanang, the presidential palace, the firebrand leader warmed a bit to people he had once branded "monsters" -- but not without exhorting them to invest in the provinces to make national growth more inclusive. Duterte, the first Philippine leader from Mindanao in the south, has consistently lamented lopsided economic growth that has bypassed rural areas in recent years.

From 2010 to 2015, Metro Manila and its surrounding regions generated nearly two-thirds of gross domestic product. None of the country's dozen or so other regions contributed more than 4%, except Central Visayas, according to official statistics.

The National Economic and Development Authority recently finalized a medium-term economic blueprint which calls for ramped-up infrastructure spending in rural areas. Duterte approved the Philippine Development Plan at a cabinet meeting on Feb. 20.

The masterplan maps out the new administration's economic policies for its six-year term. A fifth of the population lives in poverty despite the recent economic boom, and the plan is anchored on the Filipinos' vision to achieve middle class status by 2040. He wants the Philippines to pass $11,000 GDP per capita by 2040, almost four times the figure in 2015 when the vision was formed. Redirecting growth to key cities like Cebu in the central Philippines and Davao, Duterte's hometown in the south, requires better transport infrastructure to improve linkages among settlements and key production areas, by connecting rural areas to growth centers, and by strengthening urban-rural linkages, according to the plan.

Decrepit roads and bridges have hindered growth, causing traffic gridlock in the capital and congestion on national highways. To close the infrastructure gap, the government is searching for "an optimal mix" of government financing, official development assistance, and private capital.

Since assuming office last year, Duterte has approved over 500 billion pesos ($9.93 billion) for large-scale infrastructure projects. He has also been considering amendments to procurement laws that will speed up the construction of roads, bridges, airports, and other main infrastructure. Details have yet to be made public, however.

The public-private partnerships (PPP) promoted with mixed results under former President Benigno Aquino are to remain a key pillar of infrastructure development. But the institutional delays that dogged the Aquino administration's efforts have also encouraged its successor to look at other financing schemes, including development assistance from key trading partners like China and Japan. Astro del Castillo, managing director of First Grade Finance, said that while PPP remains part of the government's infrastructure strategy, measures such as bold tax reforms and campaigns against graft and corruption could boost revenues and enable the government to build roads and bridges unaided.

The shift has borne fruit. On March 7, Beijing and Manila resumed formal economic dialogue for the first time since 2011. During the interaction, China agreed to fund three projects worth $3.4 billion, including a railway link between Manila and the southern tip of Luzon, the main island. Chinese companies have meanwhile committed to investing $10.4 billion, according to the Philippine trade department. Neither government has disclosed the names of the companies concerned, however.

The improved relations with China have been noticed in Tokyo. Prime Minister Shinzo Abe arrived in January with a Japanese investment package worth 1 trillion yen spread over five years.

Amid rising protectionism, the Philippines must protect some of its key existing economic drivers, notably Filipinos working overseas and the business process outsourcing industry. Saudi Arabia's policy to prioritize employment of its own nationals could displace over a million foreign workers in the country. Advances in artificial intelligence could meanwhile affect business process outsourcing workers in a $23 billion industry that employs a million people.

"In the face of the trend toward inward-looking policies and protectionism, concluding preferential or multilateral trade agreements may become increasingly difficult," the plan said. 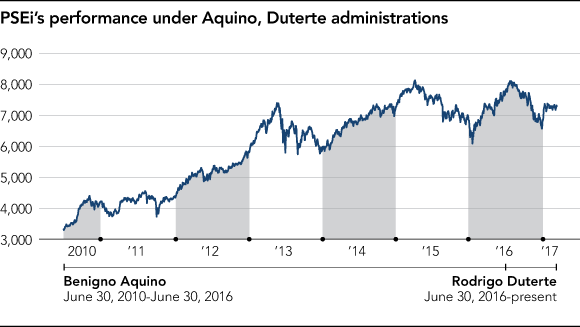 In the face of sluggish growth in international trade and muted signs of global recovery, the Philippines plans to boost exports by focusing on relatively higher-value items like bananas, sugarcane, and rubber, and high quality goods where it is competitive.

In 2016, nearly a third of exports went to four countries: China, Hong Kong, Japan, and the U.S. The report said the Philippines must find new export markets, including emerging ones in Asia, and attract foreign investors to its new economic zones.

"The previous administration was successful in growing the economy," said Ernesto Pernia, Duterte's socioeconomic planner last month. "But we will work on dispersing the wealth."