Daniel Zhang, now chairman and CEO of Alibaba, at a 2016 launch event for an SAIC Motor model that featured the tech company's operating system. The two companies have been cooperating on development since 2014.   © AP
NIKKI SUN and LAULY LI, Nikkei staff writersJanuary 13, 2021 20:55 JST | China
CopyCopied

In another sign of the scramble for alliances in the fast-moving sector, Taiwanese iPhone assembler Foxconn Technology Group on Wednesday announced its own joint venture with Zhejiang Geely Holding Group, China's largest privately owned auto group.

The moves underscore the growing ambition of Asia's largest tech groups in the automobile industry as they rush to team up with established carmakers to accelerate market entry and compete with U.S. rival Tesla in the world's biggest vehicle market.

Alibaba, already a major investor in domestic EV startup Xpeng Motors, is increasing its bet on the future of smart vehicles at a time when investors are sending shares of Tesla and Chinese rivals soaring.

The sedan unveiled on Wednesday under the brand IM -- for "intelligence in motion" -- was developed by a joint venture between Alibaba, state-owned SAIC and Shanghai Zhangjiang Hi-Tech Park Development, an investment arm of the city government.

The trio formally launched the venture on Dec. 25. SAIC is the largest shareholder, with a stake of 54%, while Alibaba and Shanghai Zhangjiang each hold 18%. Alibaba and SAIC first connected on developing high-tech models in 2014.

The IM sedan features a new solid-state battery from Contemporary Amperex Technology, China's largest battery maker, with a higher energy density than those in use now, as well as chips from U.S. tech group Nvidia.

The vehicle will be able to self-park and include smartphone functions such as photo-shooting and social media sharing.

IM will start taking preorders in April during the Shanghai auto show. A second model, a sports unit vehicle, is targeted for delivery in 2022.

"The partnership will help SAIC add more premium models to its portfolio, thanks to Alibaba's reputation," said Ivan Su, an analyst with Morningstar in Hong Kong. Alibaba's expertise in customer analytics and distribution channels will help boost sales, he added.

"The tech companies already have so much consumer data: where we like to eat, what we buy, where we go... One area that is currently a 'black box' for tech companies is what we do when we are driving," said Le Tu, managing director of Beijing-based Sino Auto Insights. "If they get access to that, combine it with the data they already have, they can then anticipate what our needs are and develop services and products that they know we need."

Meanwhile, tech manufacturers like Foxconn are piling into the EV industry, hoping to find new growth areas where they can deploy their prowess in building devices.

Foxconn, the world's largest contract electronics maker, said that its JV with Geely will be able to provide a one-stop solution for automobile assembly, production of components and electronic control systems, and EV supply chain management,

"Geely and Foxconn's alliance could complement each other and provide a better service for customers," said Foxconn Chairman Young Liu in a news release. "This collaboration is not only in line with Foxconn's corporate transformation, but also will bring a massive change to the car industry,"

Daniel Li, CEO of Geely, said Foxconn's global footprint and IT expertise will play an important, symbolic role in the car industry's transformation. 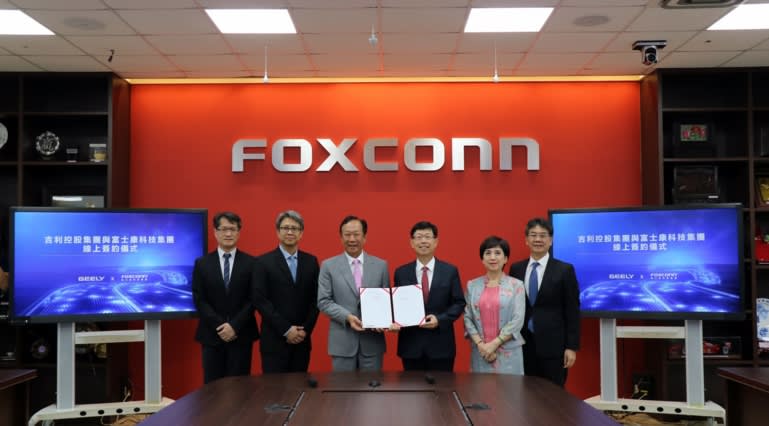 Foxconn and Geely will each hold 50% of the new JV. The Apple supplier will hold three of five board seats and have the right to appoint the chairman, according to Foxconn.

The announcement comes just weeks after Foxconn announced that it would work with embattled Chinese EV maker Byton to manufacture its first car. Though Foxconn has not built full vehicles, it has been supplying key components for carmakers like Tesla and BMW for years.

Underlying the rush into EV is Beijing's official target for electric vehicles to make up 20% of all car sales by 2025.

Sales of new-energy vehicles in China, including electric, plug-in hybrid and fuel-cell models, grew 11% to 1.36 million autos in 2020, the China Association of Automobile Manufacturers said on Wednesday. The subsector outshone total vehicle sales, which declined 2% to 25.3 million.

"The impact of the pandemic has already disappeared," Paul Gong, China auto analyst at UBS, told reporters on Wednesday. He projects double-digit growth in overall sales, with volumes "possibly higher than the 2019 level" of 25.77 million vehicles.