Buoyed by strong demand in China, the vehicle plants in the city of Shenyang's Tiexi and Dadong districts are undergoing further expansions, which will increase the annual production capacity to more than 650,000 units.

Next year, the Shenyang hub, operated by joint venture BMW Brilliance Automotive, enters a new phase. It will export the China-made cars overseas.

The plan is to deliver its new Shenyang-produced iX3 electric SUV to Europe in early 2021. It will be priced at 65,000 euros ($77,000), where passenger vehicles are subject to a 10% tariff. The automaker is also looking to export to the U.S.

China has become a global manufacturing and export hub for electric vehicles, drawing the likes of BMW and Tesla thanks to its edge as a supplier of parts for this new generation of autos. 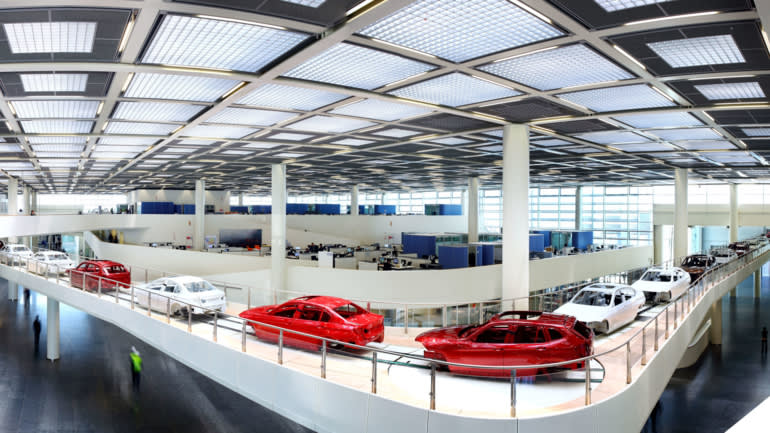 BMW's Tiexi plant in Shenyang features an open-end design that integrates production and office areas. An aerial conveyor belt transports half-finished cars through the administrative section, allowing the staff there to see the vehicles they helped create. (Photo courtesy of BMW)

The Asian country accounted for about 40% of the 660,000 electric vehicles made worldwide in the first half of the year, well ahead of the 23% in the U.S. and Japan's 2%, U.K.-based LMC Automotive said. Though China's overall auto exports declined during that period, its exports of "new-energy" vehicles, mainly electrics, swelled 140% by volume to 36,900 units and nearly quadrupled by value to $1.1 billion.

China has led the world in sales of new-energy vehicles for five straight years through 2019, and the industry ministry said a total of 2 trillion yuan ($304 billion) has been invested in the field. With government quotas expected to keep demand high, the country is developing a strong supply chain reminiscent of the networks that helped Japanese automakers stay on top for years.

Polestar, an electric-auto maker under the umbrella of privately run Zhejiang Geely Holding Group, has begun shipping the Polestar 2 to Europe and North America. Polestar ranked third in new-car sales for September in Norway, where most of all vehicles sold are electric.

Chinese electric vehicle brands are making inroads into advanced economies in ways that the country's conventional gasoline-powered autos struggled to do.

Upstart automaker Aiways has sold about 500 of its U5 crossover SUVs to a French car rental company and plans sales in Germany and Switzerland this year. Xpeng began shipping vehicles out of the country in September.

As the global auto industry pivots toward electrics and away from conventional combustion engines, its center of gravity is shifting toward China, with potentially serious consequences for one of Japan's core industries as Japanese automakers move to capitalize on China's lower costs.

Nissan Motor manufactures and sells electric vehicles in China through a joint venture with Dongfeng Motor Group. The new Ariya SUV will be produced at a plant in Wuhan coming online next year, though sales initially will be limited to China.

Honda Motor makes and sells electrics under a joint venture brand in China. The automaker also plans to produce Honda-branded electric vehicles there, which the company says eventually could be brought to other markets.

The electric vehicle manufacturing boom in China is benefiting Japanese parts and materials companies, such as motor maker Nidec, which is accelerating its expansion in China. Asahi Kasei and Sumitomo Chemical, which control much of the market for key lithium-ion battery components, are eyeing production there as well.