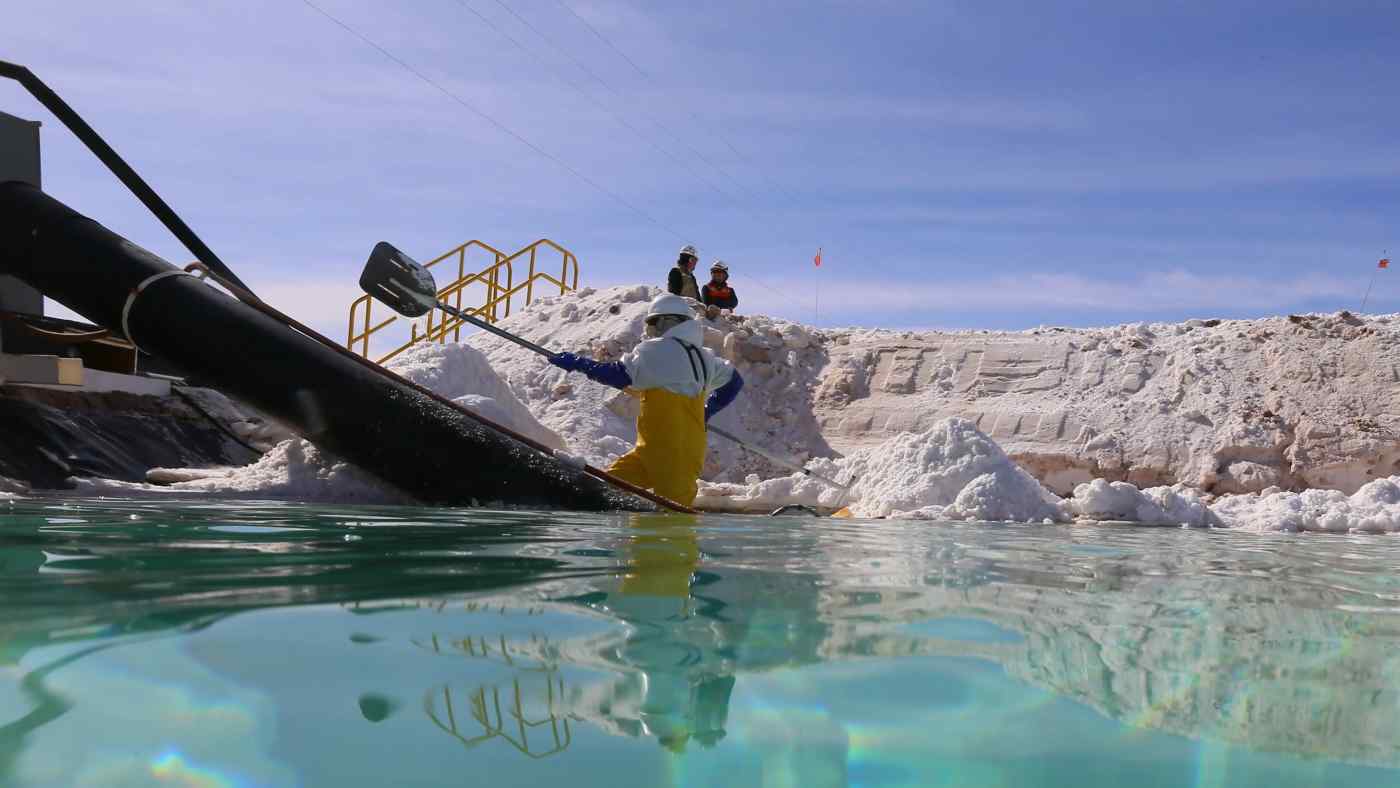 TOKYO/HONG KONG -- Rising demand for electric vehicles is creating a big problem: what to do with old batteries.

China, the world's biggest EV market, is particularly keen to come up with a solution, as it prepares to end subsidies for battery makers by 2020.

Electric cars hit the market about 10 years ago, which is about as long as the useful lifespan of most EV batteries. Soon there will be a wave of old batteries to deal with.

Not only does this pose an environmental problem: Lithium-ion batteries, the most common type used in electric cars, can be highly toxic if damaged, while extracting the lithium and materials needed to produce them can take a toll on the surrounding environment.

But the growing number of electric cars on the road is predicted to push up prices for key materials used in batteries, such as lithium and cobalt.

Recycling could be the key to keeping costs down.

"Our country has to import large amounts of lithium every year," Zhang said. "We depend on foreign countries for over 85% of the total." According to Zhang, China's demand for lithium has pushed up prices almost fourfold in three years, increasing costs for China's battery manufacturers.

Tianneng Group, founded in 1986, is considered a pioneer in China's transport battery industry.

Among them is Shenzhen-based GEM. One of the biggest battery recyclers in China, the company handles over 3 million tons of waste resources each year and produces 20% of the country's reclaimed cathode materials for lithium-ion batteries by volume.

GEM has reportedly raised 2.95 billion yuan ($500 million) in capital to beef up its recycling abilities. The same month as the list was released, the company announced it will construct facilities for recycling car batteries and metals in Ningde, a city in southern China that is home to the world's biggest battery maker, CATL. The new facilities will reportedly cover some 60 hectares.

"The volume of waste batteries is rapidly increasing as sales of new-energy cars in China rise," Wang Ge, an analyst at China Securities, said in a report. "The market for recycling lithium-ion batteries into [usable] materials will be 14 billion yuan in 2023." GEM, he added, has over 10 years of experience and has battery recycling contracts with 120 companies, including Dongfeng Motor, BAW and Toyota Motor.

GEM's revenue was 13.8 billion yuan in 2018, up 29% from the previous year. In addition to its recycling business, it also manufactures materials for batteries.

Recycling is attracting attention from both upstream and downstream players in the battery market. Brunp was acquired by CATL in 2015, while the Huayou Cobalt group has stakes in mines in Indonesia and the Democratic Republic of Congo.

EV batteries degrade over time and use, resulting in shorter distances that can be traveled on a single charge. In lithium-ion batteries, for example, impurities build up in the separators, which decreases their charging efficiency. Broadly speaking there are two types of recycling for EV batteries, according to Hans Eric Melin, director of Circular Energy Storage Research. "There are really two different growth segments which often are entered by the same players: dismantling and preparation of batteries for reuse, and material recycling," Melin told the Nikkei Asian Review.

While companies in China see opportunity in material recycling, Nissan Motor, the pioneer in electric vehicles in Japan, is focusing on reuse.

Nissan launched its Leaf in December 2010. Last spring the automaker's subsidiary, 4R Energy Corp., built a battery recycling facility in Fukushima Prefecture where old Leaf batteries are repurposed for use in other electric vehicles, including factory transportation equipment such as forklifts.

Tatsuro Shiomi, vice president of 4R Energy, told Nikkei, "We at the Nissan group have the technology and know-how related to electric vehicles and batteries. We can check the ability of old batteries in hours, while other companies take two weeks." Shiomi said China's public sector has shown interest in its technology.

The company wants to start recycling materials such as cobalt and nickel in batteries in three years, he added, but it currently lacks the technology to do so. Cooperation with metal or chemical companies is one possibility for moving forward in that area, Shiomi said.

Meanwhile Mitsubishi Materials announced last August that it plans to start experiments this year into recycling nickel and cobalt from lithium-ion EV batteries. It will decide sometime after April 2020 whether it can commercialize the business or not.

In China, the potential for the battery recycling industry is particularly large. The government is targeting new-energy vehicle sales of 2 million in 2020 and 7 million in 2025, equal to one-fifth of the country's total car sales.

That means a corresponding uptick in batteries to recycle. According to the China Automotive Technology and Research Center, the volume of used batteries in China will total between 120,000 tons and 200,000 tons in 2018-2020. That figure will increase to 350,000 tons in 2025, according to local media.

Data from Circular Energy Storage Research and Consulting indicates that China will account for 36% of the lithium-ion EV batteries available for recycling in 2025, more than the 29% of the U.S. and 24% of Europe.

Wang Chuanfu, chairman of battery maker BYD, described recycled resources as a "mountain of treasure." Although his company is not on the white list, it reportedly built a battery recycling plant in Shanghai last year. When asked about the status and location of the facility, however, the company declined to comment.

The government white list is a sign of the importance that Beijing is placing on the sector.

And while Beijing may be cutting back on support for battery makers, recyclers may see the opposite trend. "Going forward, they will receive strengthened support from the government," Ho said.

The white list describes the five companies as the "first batch," which observers take to mean that more companies will be added to the list if they can meet the government's requirements.