HAMBURG, Germany -- Chinese carmakers are gearing up to showcase new electric models at the Frankfurt Motor Show in hopes of convincing Europeans that they are at the forefront of innovation and to shift their buying habits.

Shanghai-based startup Aiways has mounted an epic, seven-week test drive from Xi'an in western China to the gates of the 10-day Frankfurt show. Little known till now, Aiways has been keen to demonstrate the reliability and durability of its U5 electric SUV by documenting online its 15,000 km passage, especially through the steppes of Central Asia.

Higher profile rival NIO, which listed its stock in New York last year, has been inviting German journalists to test its own ES 8 SUV in the Alps in the run up to the show.

Byton, meanwhile, will be showing off its electric M-Byte SUV which it is readying for European sales in 2021. Company officials said at a media preview this week that Europeans already accounted for a substantial chunk of the roughly 50,000 orders Byton has received for the model. Its new factory in the city of Nanjing will be able to produce 300,000 vehicles a year.

NIO also aims to debut in Europe in 2021 while Aiways is shooting for next April. Jiangsu Joylong Automobile, another previously obscure Chinese manufacturer, is seeking to best all other newcomers by starting distribution of its electric EW5 van in Germany next month through the dealer network of Russian car brand Lada, now owned by France's Renault. The M-Byte and the U5, by contrast, are to be sold solely online.

The European sales push comes as Chinese carmakers face a slowing and increasingly crowded market at home. There are also growing signs that Europeans may be becoming more open to alternatives to established regional brands, such as Volkswagen, which will be unveiling its first pure EV, the ID.3, at the Frankfurt show.

While Chinese carmakers have had great difficulty realizing their hopes of breaking into Western markets to date, some industry observers think their EVs stand a good chance of receiving a warm welcome in Europe.

Shanghai-based NIO has a design and research and development center in Munich. Many key systems are sourced from German suppliers, including undercarriages from Continental, steering parts from ThyssenKrupp, electromotors from Hofer and sensors from Bosch. 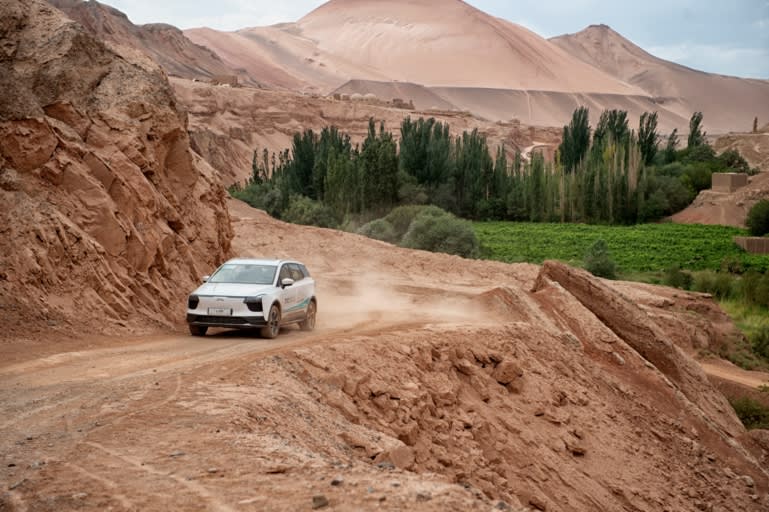 Shanghai-based startup Aiways has mounted an epic, seven-week test drive for its U5 electric SUV from Xi’an in western China to the gates of the 10-day Frankfurt Motor Show. (Courtesy Aiways)

Aiways has capitalized on European expertise by hiring Roland Gumpert, the creator of the Audi's quattro all-wheel drive system, to be executive director of its German subsidiary. The company has established a partnership with German insurer Allianz to provide aftersales repair services.

Byton, too, has a R&D center in Munich, which focuses on design and building prototypes. Daniel Kirchert, its chief executive, was previously BMW's vice president for sales and marketing in China and managing director for Japanese luxury marquee Infiniti in China.

"The recruiting of top-notch European designers, engineers and managers by Chinese EV companies and the affiliated creation of new Chinese EV brands has caused all this prelaunch excitement we are witnessing today here in Germany," said Uli Kaiser, publisher of car industry database AutoBook.

"In terms of combustion engines, consumers mainly trusted Germans, but in terms of EVs, they trust the Chinese thanks to China's strong reputation for capable smartphones and all the affiliated consumer electronics ecosystems," he said.

EVs still make up only a tiny portion of overall vehicle sales in Germany, with just 5,000 new registrations during August, or 1.6% of the monthly total.

Slow EV sales are partly due to the country's lagging establishment of charging infrastructure. However, the EU has set stricter carbon dioxide emissions restrictions for new passenger cars and light commercial vehicles to be phased in starting next year.

German carmakers including Volkswagen, BMW and Daimler meanwhile are working with Chinese manufacturing partners on new electric models. Continuing this trend, Deutsche Post subsidiary StreetScooter announced last week that it would jointly develop an electric light utility vehicle for the international market with China's Chery Holding Group. Production is scheduled to begin in 2021.