BEIJING -- Automakers from around the world are promising to manufacture locally in China's fast-growing electric car market as they display their latest offerings at the Beijing Motor Show, which kicked off Wednesday.

Foreign automakers are challenging the dominance of domestic players and startups are partnering with technology companies to offer smart electrics.

China is already the world's largest market for electric vehicles. As the government pushes so-called new-energy vehicles such as electrics and plug-in-hybrids, the market for the vehicles is expected to grow nearly 10-fold from last year to close to 7 million units in 2025.

The Japanese automaker plans to make plug-in-hybrid versions of the Corolla and Levin sedans from next year and release 10 new electrified vehicles here by 2020. Plans are also underway to produce more core components like batteries in China.

Nissan Motor, meanwhile, is a few steps ahead of Toyota. The company is preparing to release built-in-China electric vehicles here in the later half of the year.

European automakers are stepping up both production and development in China. BMW unveiled the concept model of the iX3 sport utility vehicle, part of the BMW i electrified series, at the show. The German automaker plans to produce the model in China and release it here before anywhere else.

The iX3 is the "technological trailblazer" for a next-generation product positioned as a "strategic game changer," Chairman Harald Kruger said.

Volkswagen strives to produce electrified vehicles at six plants in China by 2021. The company plans to invest 15 billion euros ($18 billion) here by 2022, focusing on such areas as vehicle electrification, autonomous driving and connected cars. The spending will make up more than 40% of the 34 billion euros earmarked for global investment over the period.

Sweden's Volvo Cars, owned by China's Zhejiang Geely Holding Group, said it aims for fully electric cars to make up 50% of its sales in 2025.

U.S. company Tesla, which sold more than 10,000 electric cars in China last year, plans to take a majority stake in a Chinese company to strengthen its presence.

Local automakers, facing the new wave of competition, are geared up to fight back with their best and latest. BYD, a leader in new-energy vehicles, showcased a series of new offerings with longer ranges at the show. Chairman Wang Chuanfu compared the competition to a sporting match, saying the first half will focus on electric vehicles and the second on smart and connected cars. 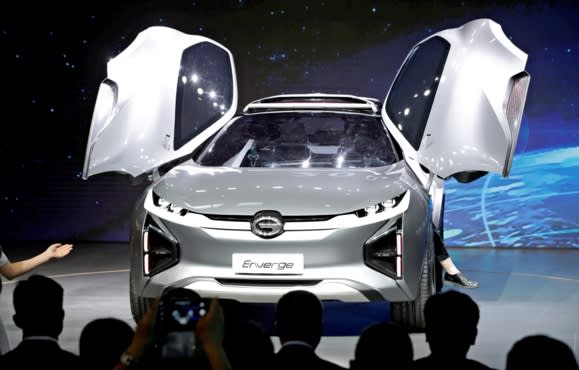 Electric car startups collaborating with big information technology companies also made an impression at the show. WM Motor, which counts search engine company Baidu as an investor, unveiled the EX5, which will be available for less than 100,000 yuan ($15,800) after subsidies. "We want to promote the adoption of smart electric cars in China," CEO Freeman Hui Shen told reporters.