Despite lifeline from Foxconn, brand faces damage from legal troubles HAMBURG, Germany -- Byton, the formerly highflying Chinese electric vehicle startup which recently got a lifeline from Foxconn Technology Group, has largely abandoned its operations in Europe.

While moves since October to halt payment of wages and rent will save the struggling carmaker money, they are likely to hinder the startup's hopes of growing sales in the continent's rapidly expanding EV market.

"A carmaker with rumors of insolvency attached could be seen as a veritable financial risk and thus cause consumer reticence," said Stefan Bratzel, director of the Center of Automotive Management at the University of Applied Sciences in Bergisch Gladbach, Germany, noting that reassurances about warranties and after-sales service are critical for buyers of a new auto brand.

Chinese EV makers have played little role in the sales surge so far, though companies including Xpeng Motors and Aiways have recently begun shipments to Europe.

The continent, however, had been key to the plans of Byton, which was founded in 2016 by two German former BMW executives, Daniel Kirchert and Carsten Breitfeld.

Last March, Byton trumpeted the upcoming launch of a flagship store in Zurich and alliances with local retail and service partners in Switzerland, Norway, Sweden, France and the Netherlands, with plans for some 20 European stores by the end of 2021. 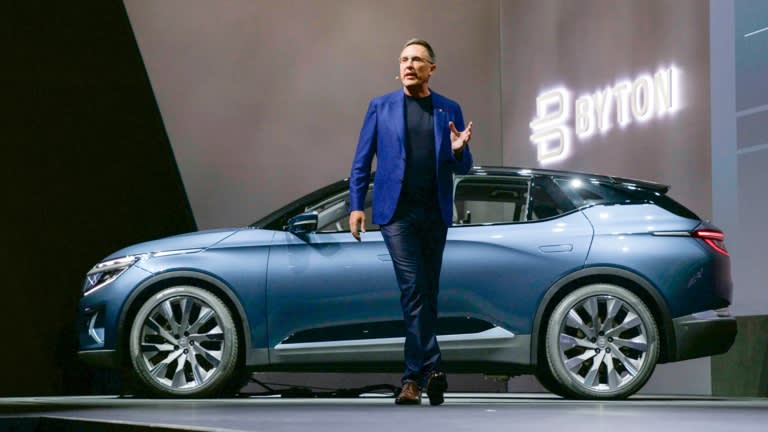 Daniel Kirchert, then CEO, at a Byton press conference in January 2020. (Courtesy Byton)

"I am sure that together with our trade and service partners and the customer-friendly charging infrastructure, Byton will convince the European market," Kirchert said in a news release on launch plans for the company's debut model, the M-Byte SUV.

Byton did not collect money from those making reservations, but said it would start taking preorders with a 500 euro ($606) deposit from the second half of 2020. With an entry price of 45,000 euros, the M-Byte was positioned roughly midway between two of the continent's hottest selling electric SUVs, the Volkswagen ID3 and Tesla's Model 3.

But by April, the company had begun laying off hundreds of staff at its North American headquarters in Silicon Valley and then suspended all operations in China, where it had about 1,000 employees, amid a shortage of funds it tied to the coronavirus pandemic. By October, it had stopped paying its 70 staff in Munich too.

Until now, not one M-Byte has been delivered. Byton's German staff recently filed suit against the company in a local labor court.

"Unfortunately, the company's Chinese shareholders have not been supporting us for a while," the company's outgoing European spokesman told Nikkei Asia. "Even though it is difficult to bring the shareholders in China to book, our claims remain valid, and as soon as the company tries to start another project in Europe, these claims will kick in even if they should try to start something under another name."

Munich prosecutors reportedly have issued an arrest warrant for Kirchert on charges of failing to make a timely insolvency filing for Byton's local arm. The prosecutors' office declined to confirm the warrant's issuance to Nikkei Asia.

While German media have reported that Kirchert fled the country for Hong Kong, he told Nikkei that he left the company last June and has been living in the former British colony for years. 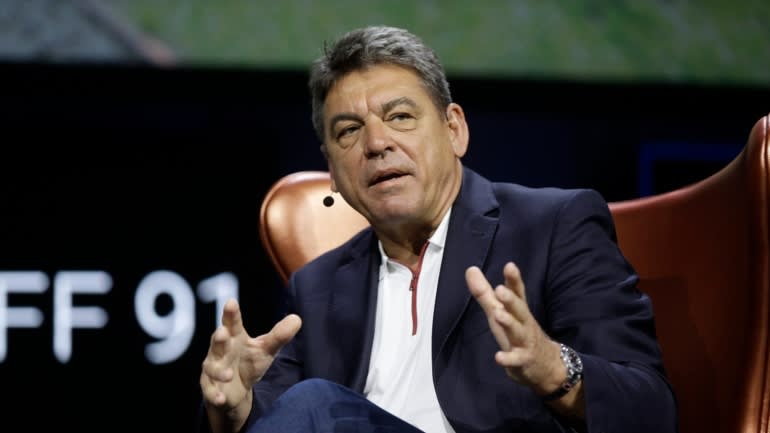 Like Faraday, which has recently lined up new funding from a Chinese local government and other investors to revive its manufacturing plans, Byton last month reached a deal with Foxconn and a body controlled by the city of Nanjing that it said would enable it to start mass production of the M-Byte by early next year.

Both Faraday and Byton are reportedly working on plans for backdoor stock market listings in the U.S. via use of special purpose acquisition corporations (SPAC).

Byton representatives say earlier reservations for the model remain valid. Websites of its European retail partners, though, make no mention now of Byton or the M-Byte. A spokeswoman for Louwman Group, Byton's Dutch partner, said Thursday that the company broke off ties with the carmaker last week.

"I think the latest stream of negative press reports on Byton will make market entry very difficult for them," said Ferdinand Dudenhoeffer, a professor with the Institute for Customer Insight at Switzerland's University of St. Gallen. "No marketing campaign would succeed in masking news such as those of prosecutors launching investigations into delayed filing of insolvency."