Nidec is expanding its workforce in China to cash in on the electric car boom there.   © Reuters
SHIN WATANABE and SHUNTARO FUKUTOMI, Nikkei staff writersJune 17, 2021 09:55 JST | China
CopyCopied

The development center opened in September last year to produce prototypes tailored to customer needs. The process usually takes six months to a year, but some customers have asked it to be done in "a month and a half."

Meeting such tight deadlines requires adequate human resources. The center hired 170 staffers by June 1 and plans to boost the number to 250 by March next year.

Eager to tap the country's burgeoning demand for electric vehicles, Nidec also plans to have 2,000 workers at an electric vehicle motor plant launched this spring in Dalian in northeast China. Along with an existing Dalian plant that also produces other products, the total workforce in the city will swell 40% to 5,000.

Under Nidec's development method, the base motor model that requires the most advanced technology, known as the "mother," is developed in the Japanese prefecture of Shiga near the company's headquarters in Kyoto. Its design and output are then adjusted to each customer's specification in a process handled by the new Suzhou center. 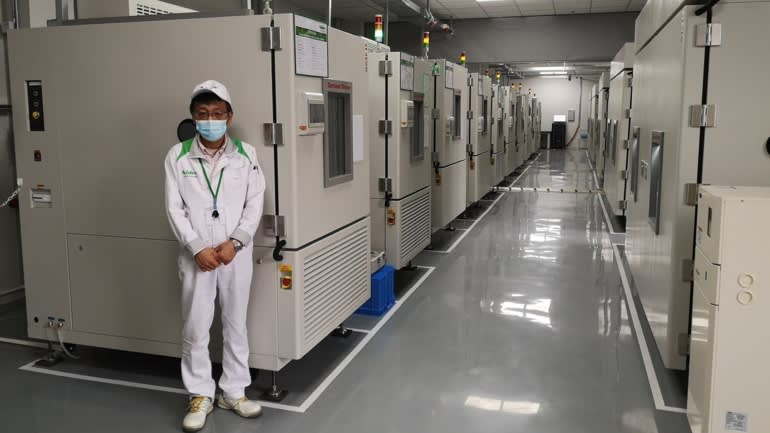 Nidec opened a development center for drive motors in Suzhou, near Shanghai, in September 2020. (Photo by Shin Watanabe)

Nidec has managed to fulfill seemingly impossible requests from customers, managing design work down to the hourly basis to meet deadlines. This method has at times enabled Nidec to steal customers away from its competitors.

"We're tapping into our speedy operations to capture the growth market," said Akitoshi Kato, who heads the Suzhou center.

The center prides itself on maintaining one of the industry's most extensive testing facilities, where it simulates various conditions to test the motor's endurance in high temperatures or in mud.

The new plant in Dalian now has just one building. But when combined with a planned second structure, it is expected to become the world's largest motor factory, churning out the equivalent of 1 million EV motors a year.

"We're planning to build a 'supplier town' around here, or a hub of about 20 related parts factories for EVs and other applications," said Kazutsugu Igarashi, the head of the Dalian factory.

Nidec controls 5.5% of China's EV motor market, the biggest slice for a foreign independent manufacturer, according to Mizuho Bank senior research officer Tang Jin. The Japanese company ranks fourth in the market for drive systems, which include gears and inverters, at 15%.