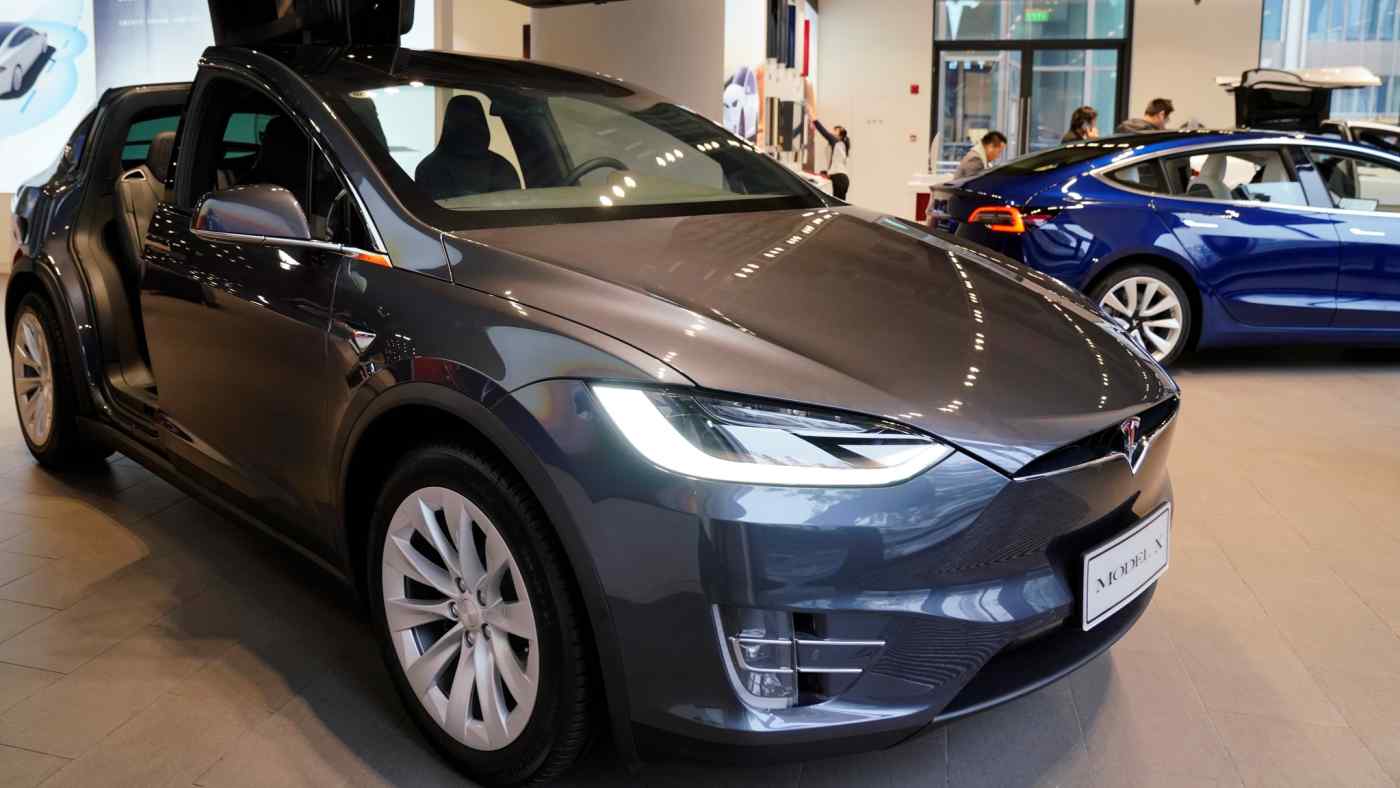 Tesla is bringing China's first entirely foreign-owned plant online as early as this year while Toyota Motor, Volkswagen and other foreign rivals are stepping up releases of new energy vehicles.

As Beijing's policy shift on new energy vehicles -- electric, fuel-cell and plug-in hybrid vehicles -- brings foreign competition into the market, domestic players being propped up by government subsidies face a war of attrition amid the dwindling support.

"I'm really excited to be here for the Shanghai Gigafactory, which is, I think, the Tesla China team has done an amazing job, really mind-blowing," Tesla CEO Elon Musk told the World Artificial Intelligence Conference that kicked off Thursday in Shanghai.

"China is the world leader in environmental sustainability," Musk said. "It's extremely impressive, I mean I think half of all the electric cars in the world were made in China last year."

Tesla's new facility will churn out the Model 3 compact sedan. It will also start building the Model Y sport utility vehicle, slated to debut in 2020. A strategic vehicle for the Chinese market, the Model Y is expected to sell for about half the price of Model X, its luxury counterpart.

Tesla is enjoying solid demand in China. The California-based company sold about 21,000 units for the January-June period, more than twice the tally from the same period a year ago. More consumers are interested in new technologies being offered by Tesla, Alan Kang at U.K. research company LMC Automotive said.

Other global automakers are following suit through local partners. Volkswagen has set up an electric vehicle joint venture with a mid-size player, its third partner, now that foreign automakers are allowed to partner with up to three local companies to manufacture and sell new energy vehicles, instead of just two. The German company plans to roll out at least 30 new energy models by 2020, building 40 models in China by 2025.

Sales are growing for new energy vehicles. Toyota Motor sold 9,000 units in the first six months of the year, compared with almost none a year earlier. Having launched Chinese sales of plug-in hybrids this spring, the Japanese company plans to release mass-produced electric vehicles next year and expand the lineup to at least 10 models in early in the next decade.

As foreign players cash in on a boom, Chinese automakers are struggling to stand on their own without government subsidies, which are set to phase out in 2020. SAIC Motor, the No. 3 in new energy cars, saw January-June sales rise 7%, while BAIC Group, the second-largest, recorded an increase of 15%.

Startups, which used to number at least 50 companies, are particularly hard hit as falling sales are making it difficult to raise funds. China's electric vehicle manufacturers procured just $780 million between January and mid-June, down nearly 90% on the year, according to U.S. private capital market research company PitchBook Data.

A series of battery fires forced Nio, once the front runner, to recall about 4,800 electric vehicles and shed 1,000 jobs, or 10% of its workforce. WM Motor, which counts search engine giant Baidu among its investors, is fielding complaints about its cars, including sudden slowdowns while traveling.

Beijing's policy change is also contributing to their plight. In 2018, the government introduced quotas for automakers to make and sell new energy vehicles, which meant that those that fail to reach the threshold would buy credit from others that exceeded the mark. But the program's implementation was postponed to this year, forcing emerging players to miss credit-selling opportunities and benefiting foreign rivals.

New energy vehicle makers are mired in a supply glut, said an executive at an investment company, predicting that those with poor management will get weeded out.

China promised to open up the markets when it joined the World Trade Organization in 2001. But it has not lived up to its promises, using its status as a developing economy as an excuse -- much to the frustration of the U.S.

Beijing plans to do away with the cap on foreign ownership of auto companies by 2022, having removed limits for new energy vehicle manufacturers in 2018. BMW has struck a deal to raise its ownership of a passenger car joint venture to 75%.