NAGOYA, Japan -- Toyota Motor is using Panasonic batteries designed for Tesla electric cars in its own plug-in hybrids for the Chinese market, Nikkei has learned, underscoring the difficulty of finding a stable supply even as demand rises.

The batteries have been installed in the new Corolla and Levin sedans that the Japanese automaker rolled out in China this year. Toyota is believed to have ordered around 50,000 of the batteries, which are the same cylindrical type used by Tesla.

The arrangement not only helps Toyota deal with the challenge of securing high-quality batteries, but also should boost Panasonic's profit margins. Automotive battery production lines at Panasonic's Suminoe plant in Osaka are believed to be operating at full capacity thanks to the additional order.

Panasonic had supplied electric-vehicle batteries exclusively to Tesla, though the relationship between the two has grown strained. Nikkei reported in April that they halted plans for additional capacity at their sprawling joint-venture battery Gigafactory in the U.S.

Meanwhile, Panasonic has supplied prismatic, or rectangular, hybrid-vehicle batteries to Toyota, and the two companies announced a joint venture in January to produce batteries for electrics. 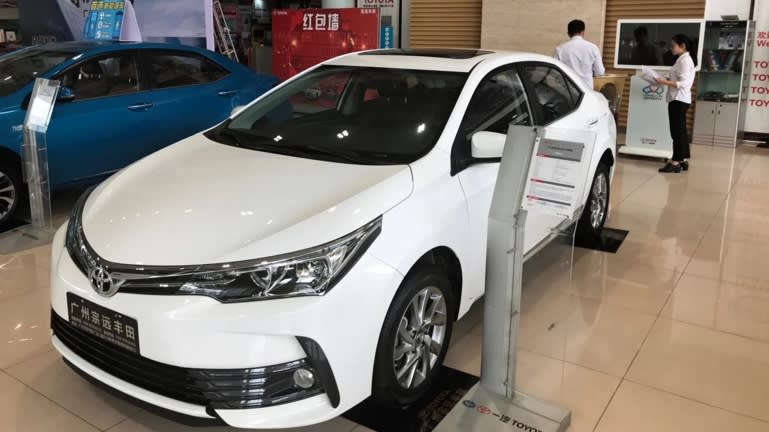 Toyota Motor has used batteries made for Tesla vehicles in models including its Corolla plug-in hybrid. (Photo by Takashi Kawakami)

China imposed production quotas this year for new-energy vehicles, a category that includes plug-in hybrids and full-electric autos. Shipments of electrified vehicles from Chinese factories jumped 64% in 2018 to about 1.43 million autos, according to the China Association of Automobile Manufacturers.

"There's a limited number of manufacturers in China that can make high-quality automotive batteries, so the supply-demand balance is tight," said Tang Jin of Mizuho Bank.