TOKYO -- Chinese material manufacturers plan to dramatically increase their output of biodegradable plastics made from plants in response to China's ban against disposal plastic bags.

A single company, China BBCA Group, aims to build up its capacity to produce the plastic to a level that far outstrips global demand.

The scale of these plans attests to the size of China's plastic waste problem. But it also raises concerns among competitors of a Chinese-driven supply glut the likes of which was seen in solar cells and and wind turbines.

A supplier of lactic acids used in food additives, BBCA in August started up a plant capable of producing 50,000 tons of polylactic acid (PLA) polymers a year, later breaking ground on another plant in December. The group plans to reach the capacity to produce 700,000 tons of PLA annually by 2023.

PLA, a biodegradable compound derived from corn and other plants, has a wide range of uses including as nonwoven fabric masks, apparel and drinking straws. Nearly 10 other Chinese companies besides BBCA have plans to raise their PLA capacity, a July survey by China's Huaan Securities shows. Similar activity can be seen in other biodegradable plastics. Huaan says about 15 companies plan to boost production of polybutylene adipate terephthalate, a petroleum-based compound also known as PBAT.

Major Chinese producers plan to increase annual output of PBAT and polybutylene succinate (PBS) by a combined 1.24 million tons, according to interviews conducted by BBCA's Tokyo-based partner HighChem. This is 4.8 times their capacity in June 2020.

This trend traces back to January of last year, when the National Development and Reform Commission, China's top economic planning body, announced a policy to limit the use of non-biodegradable plastic.

In China, 40% of used plastics end up in landfills or as litter. The country is estimated to account for a quarter of the worldwide plastic waste that pollutes oceans.

The Chinese public has complained strongly about the inadequate plastic waste management, to the point where both the state and the Communist Party were forced to respond. The draft five-year plan unveiled by the party in November, which lays out key economic and political goals through 2025, included a provision to "strengthen governance of white pollution."

The build-up of biodegradable plastic production also aligns with the goals of local governments. The city of Bengbu, where BBCA is headquartered, and the surrounding Anhui Province are providing financial subsidies and tax incentives to the company, and also assisting with PLA business meetings. 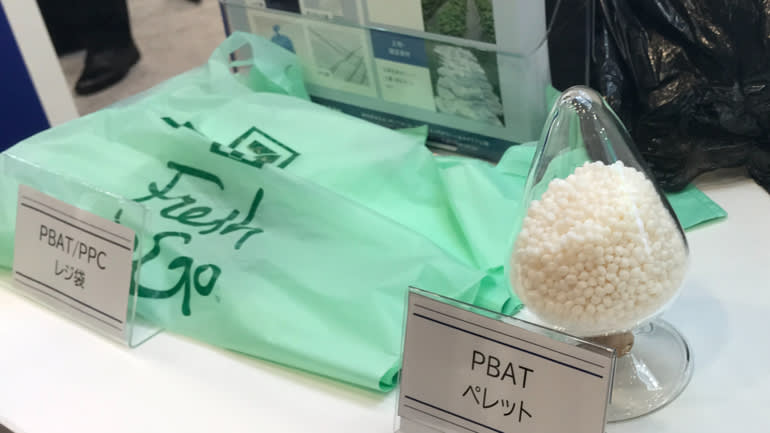 Shopping bags and pellets made with PBAT. (Photo by Shuhei Yamada)

HighChem, a materials trading company, sees a large potential for PBAT and recently signed a contract with a separate Chinese manufacturer to import and sell film for agricultural use.

If biodegradable plastic production continues to grow in China, "the cost of use in environmental products will drop," said HighChem President Ushio Taka.

China's current demand for non-biodegradable plastic for such uses as bags is estimated in the millions of tons. The government's policy change could spur a shift toward plastics that break down naturally, which would further expand the market. In that scenario, a supply glut would not immediately occur.

But when Beijing hands down such decrees, local governments typically dangle incentives to increase production, and companies answer the call in anticipation of subsidies and profits. This was the pattern seen previously with solar cells, wind-power equipment and LCD. The scaleup in production disregards profitability, resulting in excess supplies and global price slumps.

In Japan, the government and chemical makers are not as active in biodegradable plastics as Chinese peers, instead focusing on biomass plastics. These are made from non-biodegradable plant material that can be incinerated for energy. The goal is to produce 2 million tons of all bioplastics a year by 2030.

But Japanese suppliers' ability to meet this target remains limited. Mitsubishi Chemical has the capacity for only 20,000 tons of biodegradable plastics a year through its joint venture with Thai petroleum major PTT. Another supplier, Kaneka, has just 5,000 tons in annual capacity.

There are plans to raise capacity, but "the concern is that we would lose if we competed head-on with the Chinese in investing," said a Mitsubishi Chemical representative.

Despite the mounting scale among Chinese competitors, Germany's BASF sees China as a promising market where demand will grow. The company is teaming with a local maker to position itself for a larger market, granting Red Avenue New Materials the license to manufacture and sell PBAT. Red Avenue is building a new plant that will launch in 2022 at a yearly capacity of 60,000 tons.