TOKYO -- Chinese-owned recycling companies in Japan have agreed to cooperate to tackle plastic waste by setting up an association in the wake of Beijing banning such imports to China, but the move has raised concerns in Tokyo that local companies could be priced out of the market.

Fifty recycling companies have come together to form the Asian Plastic Resource Recycling Promotion Association with the aim of collaborating in business and sharing information on Japanese government regulations and market conditions.

Two-thirds of the members are Chinese-owned companies and the rest are mostly Japanese, as well as some Vietnamese and Malaysian businesses that are hoping to enter the market.

The association will organize seminars on regulatory developments in Japan and offer support to members in legal and tax matters.

The Japanese government, however, has voiced concern that the association could become too powerful. At the launch of the new body on Dec. 6, Koji Narita, an official at the ministry of environment, told the Chinese companies they must follow the rules and stressed the importance of cooperation with government and local industry associations.

Narita said: "Some Japanese recycling companies could become wary of Chinese ones. Building trust with local companies is key to your success."

"Chinese collaboration would be threatening to local companies in term of competitive pricing," warned Motoshi Muraoka, a partner at the NTT Data Institute of Management and Consulting. 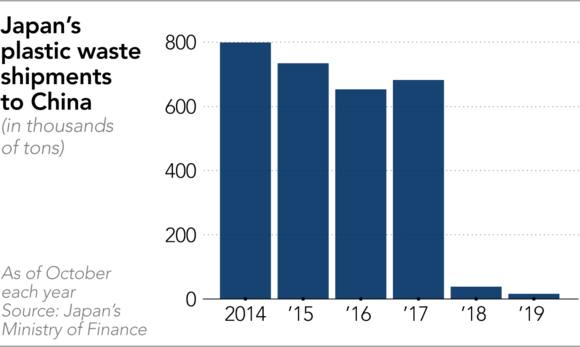 Some of the Chinese recycling companies relocated their waste processing factories to Southeast Asia but the region has since started to reject such imports as well.

The Chinese recyclers are now trying to find business opportunities in major waste exporting countries such as Japan, the world's second-biggest generator of plastic packaging waste on a per capita basis after the U.S., according to a report by the United Nations.

To differentiate his business from rivals, his recycling subsidiary in Kyushu, Japan, is planning to increase production of recycled plastic pellets, which are more profitable than plastic flakes as they are easier to mold for use in a variety of products.

The association "will bring together a wealth of plastic recycling expertise" in Japan, said Toshiyuki Honda, chairman of the organization and head of Waen Trading.

"Chinese recycling companies are experienced as the country was the world's largest importer of plastic waste," said Wang Wang, an executive president of the China Plastic Reuse and Recycling Association. Until recently, China was importing about 7 million tons of plastic waste per year, Wang said.

However, a potentially serious problem for these businesses operating in Japan is a shortage of labor. While the government has relaxed work visa requirements for 14 different job categories, the recycling industry -- which employs about 630,000 people -- was not included.