China's Shanghai Ghrepower shows off a new turbine at a Tokyo exhibition. The company aims to raise its count of turbines in Japan 10-fold. (Photo by Nana Shibata)

TOKYO -- China's wind turbine builders are stepping up their offensive in the Japanese market, leveraging their low costs as they seek a greater share of the island country's renewable-energy sector.

Japan, which relies on foreign suppliers for most of its power, plans to make renewables a chief energy source by fiscal 2030, creating a growth market in fields like wind and solar. But domestic equipment makers are bowing out one after another, leaving the country increasingly reliant on Chinese players.

These Chinese builders control a major share of the global market. With Japanese wind-turbine makers quitting, the country's reliance on China for renewable energy equipment looks set to grow beyond solar panels.

Shanghai Ghrepower, which does business in more than 20 countries and regions, plans to wrap up environmental impact assessments in the next three months on its 19.2 kW turbine developed for the Japanese market. In Japan, turbines with a capacity below 20 kW are typically classified as small, and assessing their environmental impact is much quicker than doing so for larger turbines, where the process can take two years.

"Japan is our highest-priority market," President Wei Yu said, citing "many opportunities to fill in gaps," despite the island nation's small land area.

But there are disadvantages to pursuing smaller turbines. While they can be easier to get up and running, they are viewed as more accident-prone than their larger cousins. Moreover, sale prices have fallen: Japan's feed-in tariff system now requires utilities to buy electricity from renewable sources at 20 yen (18 cents) per kilowatt-hour as of fiscal 2018, down from 55 yen the previous year.

Yet prices in Japan are still "the highest in the world," said the Shanghai Ghrepower executive.

Chinese businesses intend to feed that rise with their strength in small turbines. ANE, which does business in markets like Denmark and Germany, has sold 40 turbines in Japan since entering the market in October 2017, and hopes to win orders for 200 turbines here this year.

Cost is the chief advantage these companies wield over leading small-turbine makers located in Ireland and elsewhere in Europe, for instance. The Chinese businesses are said to offer the lowest prices anywhere on small turbines, and in larger ones, their costs are as much as 50% below Western competitors. On top of enjoying a plentiful supply of low-priced domestic iron, Chinese builders keep costs down through economies of scale.

Chinese companies make about 10,000 turbines per year, or one-third of the global annual production volume. By comparison, Japan's Hitachi produced around 60 turbines per year until recently, and announced in January that it would stop making them entirely.

Fueling Chinese businesses' Japan offensive is the fact that their home market looks to have peaked. According to Wood Mackenzie, a UK consultancy, China's newly installed capacity was 20,077 megawatts in 2018. In 2021 it is expected to reach 21,950 MW, a slowdown from the growth seen in the early 2000s. Investment in renewables has fallen after the central government tweaked its own feed-in tariff system to counter the growing costs of paying renewable energy generators.

With growth prospects scant at home, Chinese turbine builders have sought a path abroad. The administration of Chinese President Xi Jinping has made exporting wind power equipment a focus in its Belt and Road infrastructure drive, targeting African countries and Central Asian markets like Pakistan. Some see the builders' Japan campaign as geared to building their bona fides in developed markets in order to burnish their image in emerging ones.

How China's large turbine makers approach Japan will be a point of focus in the future. Goldwind, China's top turbine builder and the No. 2 player worldwide, has been showing its wares at exhibitions in Japan since 2016 and, according to a company source, is considering making a push into the Japanese market.

Western players -- including Denmark's Vestas Wind Systems and General Electric of the U.S. -- control a majority of Japan's large-turbine market by share. But an appearance by low-priced Chinese competitors could force those big names to reexamine their strategies. 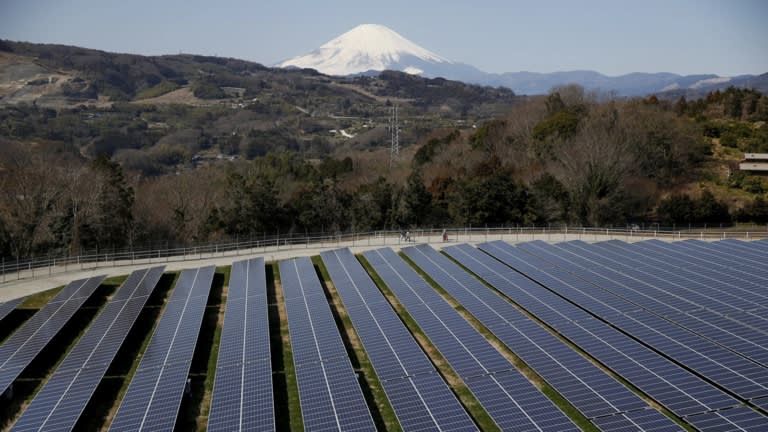 In solar panels, Chinese businesses hold a roughly 40% share of the global market, while Japanese players are fading into the background -- including Sharp, which was the world leader until 2006 and has since been purchased by Taiwan-based Hon Hai Precision Industry, or Foxconn. In 2017, Chinese companies made up seven of the 10 top-selling solar panel makers, while not a single Japanese manufacturer made the list.

The Japanese solar panel market was 30% to 40% controlled by Chinese makers like Jinko Solar in 2017, Nikkei data showed, with mass-produced, low-cost panels pouring into Japan.

In its fifth strategic energy plan, laid out in July 2018, Tokyo pledged to support wind power, aiming to increase its share of the country's energy mix to around 1.7% by fiscal 2030, up from the current 0.6%.

But on top of Hitachi's withdrawal, Mitsubishi Heavy Industries and Japan Steel Works have in effect pulled out of making turbines. Mitsubishi Heavy has formed a joint venture in offshore wind energy with Vestas, but the company's headquarters and manufacturing facilities are located in Europe.

The Japan Wind Power Association has expressed concern over the reliance on overseas players, saying that compared to more familiar Japanese turbines, there is "plenty of information foreign makers haven't released, such as on their generation-control mechanisms." Doubts may also arise over the ability to address potential trouble with foreign-made turbines.