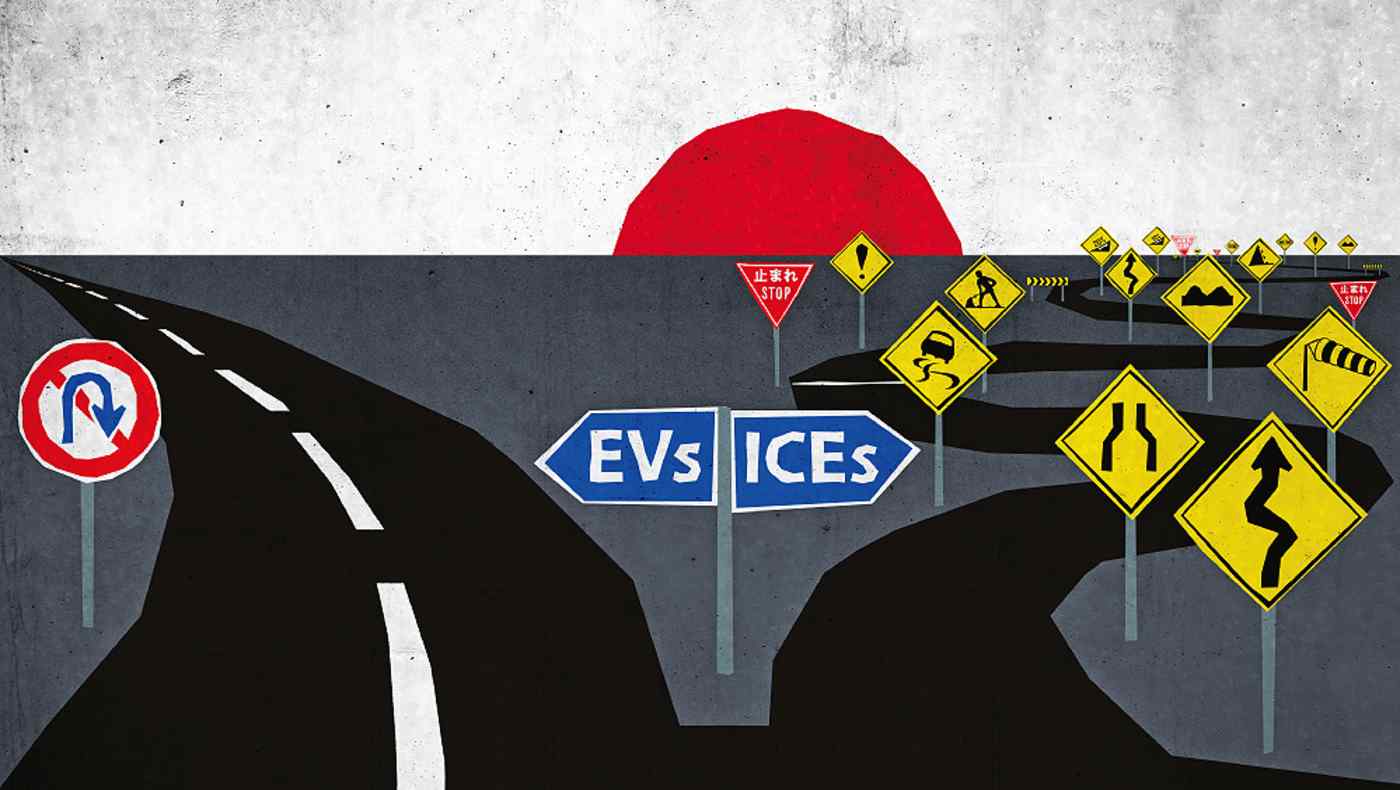 This is the latest piece in a series on the COP26 climate summit and the danger Asia faces from global heating. Previous articles can be viewed here.

The trio of problems has loomed ever larger as the region grapples with energy shortages and price rises in the run-up to COP 26, the crucial United Nations climate conference starting on Sunday in Scotland.

While many of the obstacles facing Asia are also seen in other parts of the world, its difficulties are unusually varied. The region's size, energy-intensive industries and stark wealth gaps make it a bellwether for the actions needed to meet decarbonization goals.

Nikkei Asia looks at how Japanese automakers are reluctant to bet on electric vehicles. Companion pieces look at Indonesia's coal habit and Taiwan.

TOKYO -- Japanese Prime Minister Fumio Kishida seized a motoring metaphor earlier this month when he pledged to make the fight against global heating an "engine for economic growth." But one of the biggest brakes on his ambitions may be the country's powerful carmakers.

The government's pledge to make the nation carbon neutral by 2050, reaffirmed by Kishida, has come under fire all year from the auto sector. Figures including Akio Toyoda, head of the industry lobby group as well as the president of the world's largest car manufacturer Toyota Motor, question how the target will be achieved. While acknowledging the need for carbon neutrality, Toyoda issued a stark political warning that seemed to clash with the COP26 goal of speeding up the switch to electric vehicles (EVs).

Japan should not narrow its focus solely to EVs, but rather "search for options that suit Japanese circumstances," he said at a news conference hosted by the auto lobby in September. That was a rebuff to the official aim of a rapid transition to electric-powered vehicles and an end to sales of new gasoline-only vehicles by 2035. "In carbon neutrality, our enemy is carbon -- not the internal combustion engine," Toyoda added.

Toyoda may be unusually outspoken for a Japanese business leader, but he is no outlier. So far, Honda Motor is the only Japanese automaker to announce a complete phaseout of gasoline cars, including hybrids. It has vowed to sell only EVs and fuel cell vehicles (FCVs) by 2040.

Carmakers' reluctance to forsake the combustion engine is not the only trend stymieing the government. Japan's heavy dependence on fossil fuels means that even many electric cars are currently partly produced, and even powered, by burning coal.

What's more, EVs are generally more expensive and have a more limited range per charge than Toyota's Prius-like hybrid vehicles. An EV is also more energy-intensive than a traditional vehicle because of the battery, which requires the extraction and refinement of metals like copper and nickel. How Japan deals with this motor industry carbon conundrum is of crucial importance, given the country's economic heft and the power of its example in Asia and beyond. In April, the nation revised its target of a 26% carbon emissions cut by 2030 from 2013 levels, its commitment under the 2015 Paris climate accord. Instead, it raised the goal to at least 46%. As of 2019, the latest figures available, it had managed a reduction of 14%.

In 2030, renewable energy is to account for 36% to 38% of Japan's electricity mix under a government plan approved in October. That would be double the 2019 level. But coal will still account for 19%, even as countries such as the U.K. and France have vowed to phase it out altogether.

Experts in the automotive sector, which employs 5.5 million people, are closely watching whether Japan's government and industrialists can develop a genuinely environmentally progressive growth model.

"Without energy, cars are mere scraps of steel. It is important for a government to come up with a green energy strategy that can eliminate carbon from fuel, instead of just calling for EVs [themselves]," argued Toshio Fujimura, a visiting professor at the Aichi Institute of Technology who developed engines for Toyota during a career of more than three decades at the company.

He added that carbon-neutral products such as biofuels and e-fuels could be used to power existing internal combustion engine cars, as an alternative to EVs. E-fuels combine hydrogen with carbon dioxide captured from the atmosphere.

"Carmakers, meanwhile, have a duty to consider what would be the best solution for customers and carbon neutrality by developing in all directions from efficient engine cars to hybrids, plug-in hybrids, battery electric vehicles and fuel-cell cars," he added. Fujimura highlighted the challenge facing Japan and other Asian countries in a simulation he did of total carbon dioxide emissions during the life cycles of an EV and a hybrid in 2030. This took into account the carbon impact of all processes, including production, use and battery disposal, as well as energy sources.

The professor estimated an EV in Germany and the U.S. would be able to cut emissions by 10% and 2% each, compared with a hybrid vehicle using conventional gasoline and an electric motor. But Japan would see an emission rise of 10%, and China 33%, because of the high fossil fuel part in their energy mixes.

In February, Toyoda met with then Prime Minister Yoshihide Suga to discuss carbon neutrality. The New York Times in July reported that a Toyota senior executive visited Washington a month earlier to outline Toyota's opposition to an aggressive transition to all-electric cars.

But the automaker is running into increasing headwinds. The European Union and the U.K., for example, are set to ban new sales of gasoline cars, including hybrid vehicles, by 2035. The 27-country European grouping is also due to introduce a new tax on industrial imports made with high carbon emissions. 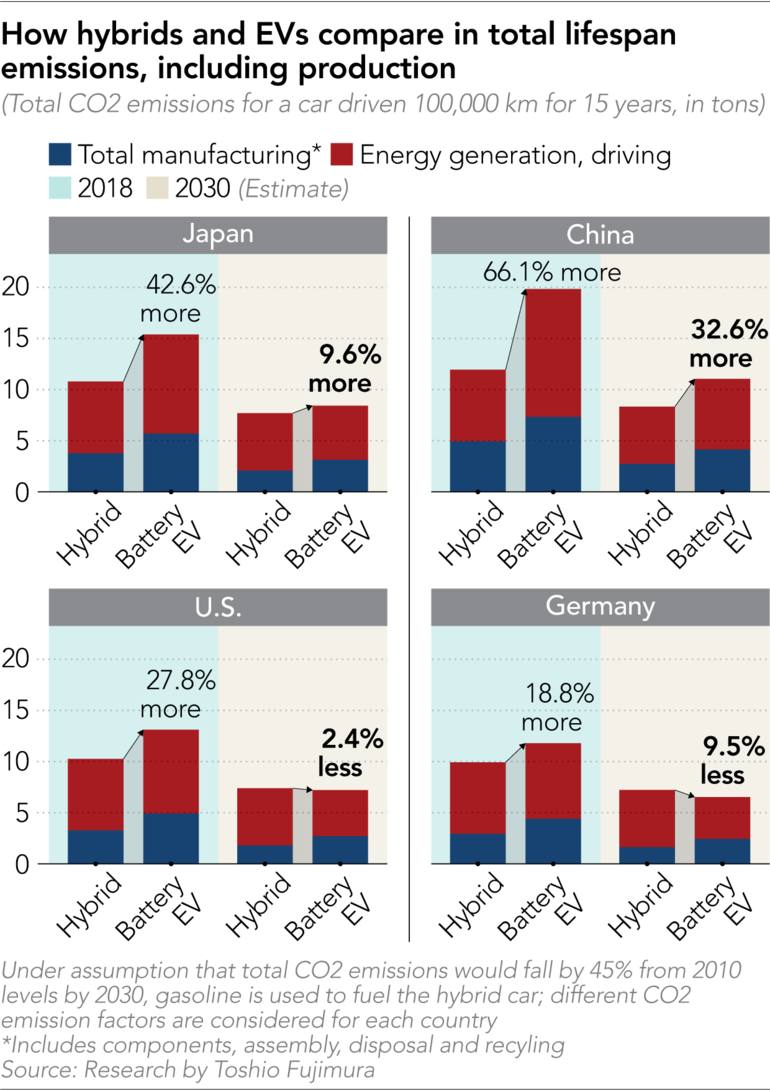 In the U.S., President Joe Biden in August said he wanted half the cars sold in the U.S. by 2030 to be zero-emission vehicles. Even India, which suffers from frequent power outages, says EVs will make up 30% of new car sales by 2030.

Analysts say the distance between the Japanese automotive industry and policymakers in Tokyo is making it difficult for the country to come up with a coherent response to the international moves.

"Even if what the Japanese car lobby argues makes sense, pushing hybrid cars is already a minority [view] among international communities," said Sanshiro Fukao, a senior fellow at the Itochu Research Institute. "Japan should be aiming to win the competition with a speedy transition to EVs, under the Europe-led rules of the game already being played by the U.S. and China."

Europe's rapid push toward EVs has been driven partly by the emission scandal that erupted in 2015 around diesel-powered Volkswagons. That led to a search for a competitive green technology other than hybrid -- already an established strength of Japanese carmakers -- with abundant subsidies to drive adoption.

The U.S., home of EV giant Tesla, has its own commercial reasons to move beyond hybrids. Experts believe China is also seeking to take a lead in EVs, including through the use of cutting-edge technologies such as autonomous driving.

Nobuhito Massimiliano Abe, a senior partner at A.T. Kearney, warns that international trends are running increasingly against Japan's automakers. "As Japan as a market faces a decline in its size and a relative loss of global share, the country is increasingly in a difficult position to voice its own direction" to move the world, he said.

As long as the complete phaseout of gasoline engines is the goal for decarbonization, shifting to EVs seems the most viable option. That calculus would change only if carbon-neutral fuels and fuel-cells, or other types of powertrains, emerge as realistic alternatives in terms of cost.

Callysta Thony, from Singapore-based consulting firm Eden Strategy Institute, said hybrids might still have a life as a smart interim strategy in many markets. The big question is for how long.

"There is always the risk of path dependency," she said. "If we commit to hybrids, then it locks us into that behavior for a significant amount of time because we've invested capital into hybrids before you can actually see reduced emissions from full electric car usage. Will we ever leave hybrids if we choose to commit to them now?"