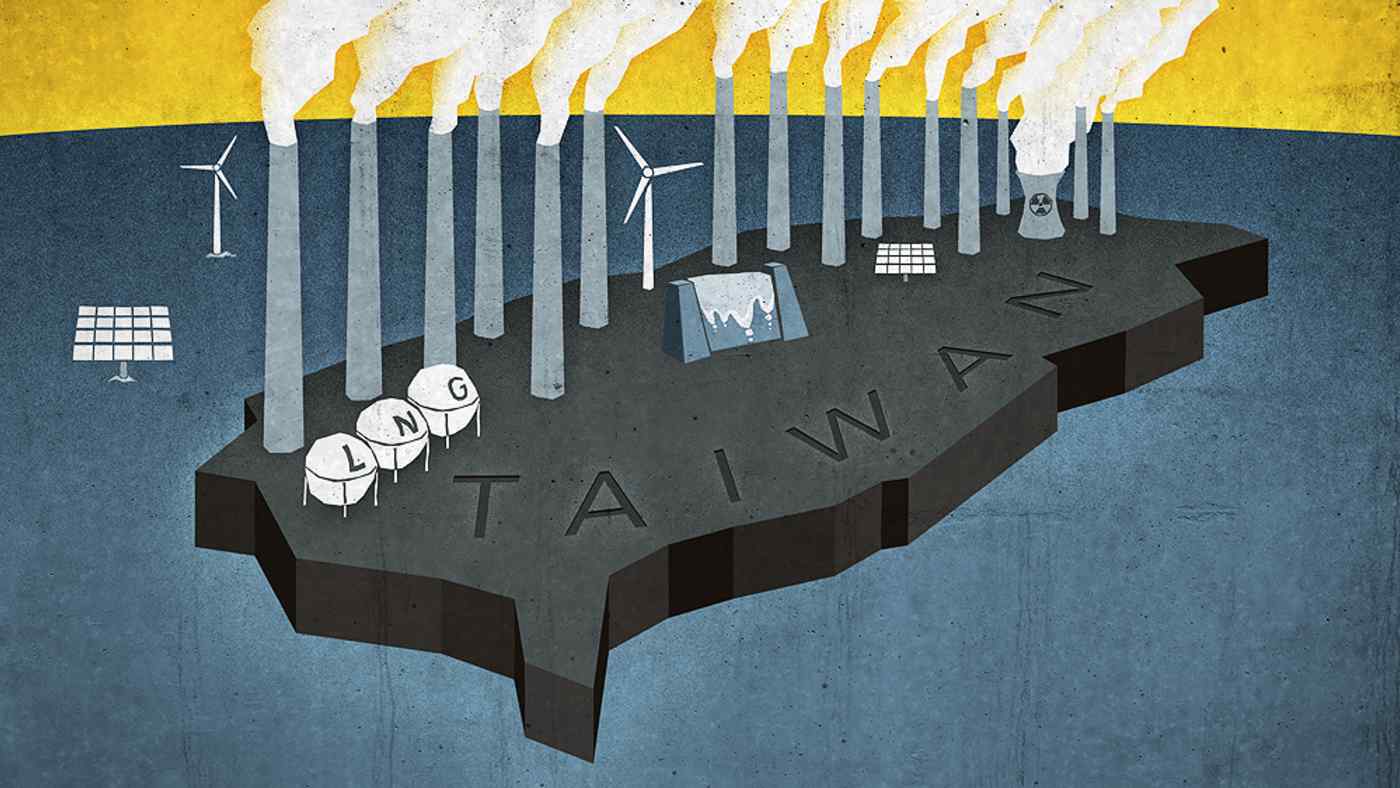 This is the latest piece in a series on the COP26 climate summit and the danger Asia faces from global heating. Previous articles can be viewed here.

The trio of problems has loomed ever larger as the region grapples with energy shortages and price rises in the run up to a crucial UN COP 26 climate conference now underway in Scotland.

While many of the obstacles facing Asia are also seen in other parts of the world, its difficulties are unusually varied. The region's size, energy-intensive industries and stark wealth gaps make it a bellwether for the action needed to meet decarbonization goals.

TAIPEI -- It took Taiwan until World Earth Day in April this year to unveil its plan to achieve net-zero carbon emissions by 2050. The delay reveals much about how international economics and politics have weighed on the self-governed island's moves to combat global heating.

Taiwan holds a strategic position in global tech supply chains through industries that are still heavily fossil fuel dependent. Its world importance has been underscored by recent international chip shortages that have hit production of popular consumer products such as iPhones.

The democratically ruled territory also faces a political constraint of hostility from China, which considers it a renegade province. That means Taiwan is excluded from both the Paris climate agreement and the current follow-up international conference in Scotland.

Taiwan's preoccupations mean it has been slower than many other economies to formulate climate policies -- and needs to understand that they should now be central, said Chou Kuei-tien, a professor at National Taiwan University. The island's tech manufacturers also face rising demands from global customers, such as Apple, to cut their carbon footprints.

"It's a real game this time internationally ... Decarbonization is no longer just a slogan like in the 1990's," Chou told Nikkei Asia. "Whether Taiwan participated in the U.N.'s climate meetings or not, our enterprises are interlocked in global supply chains. It is crucial and urgent for companies to act on decarbonization -- or they will face losing competitiveness in the supply chain."

Although Taiwan is not invited to the COP 26 meeting, the government will host forums on decarbonization in a nearby hotel in Glasgow in early November. The newly established Taiwan Climate Alliance business grouping will promote the tech industry's efforts on decarbonization. The alliance was founded by eight leading companies including chipmaker Taiwan Semiconductor Manufacturing Co., iPhone assembler Pegatron, and Tesla and Apple power components supplier Delta Electronics.

But the conciliatory words cannot obscure structural difficulties confronting Taiwan as it grapples to make its energy mix less reliant on fossil fuels. The goal of moving away from coal has become harder still because President Tsai Ing-wen's administration wants to phase out nuclear power by 2025 in the wake of Japan's Fukushima disaster in 2011. Taiwan aims to increase its use of renewable energy to 20% by 2025, with coal-fired power at 30%, and natural gas-fired electricity at 50%.

Clean renewable energy -- including wind, solar, hydropower, geothermal energy and biofuel -- accounted for only 5.58% of energy generation during the first eight months of this year. Coal-fired power's share stood at more than 45%, according to the latest data available from the Bureau of Energy, Ministry of Economic Affairs. 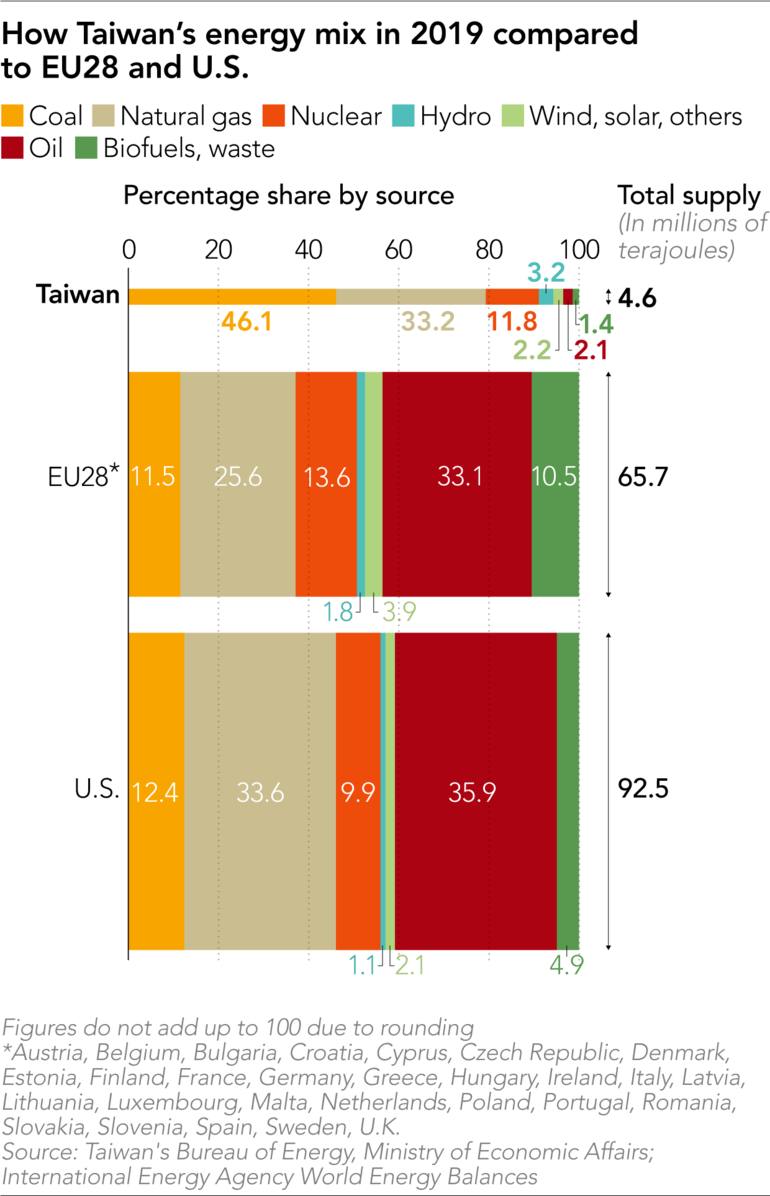 Economic Minister Wang Mei-hua recently admitted that the island is unlikely to meet its goal of generating 12% of power from renewables this year. A severe drought has hobbled hydraulic power generation, while the COVID-19 pandemic delayed construction of offshore wind farms.

The slow ramp-up of renewable energy and the rising use of fossil fuel-fired power as nuclear winds down highlight a hard central choice for the government. It wants to prioritize both economic growth and decarbonization, yet it is hard to see how it can do both. Blackouts earlier this year due to a minor malfunction at a power plant exposed the vulnerability of the island's energy supply.

Many Taiwanese tech companies have already set their own decarbonization goals, thanks in part to targets set by their customers. Apple, a key client of both TSMC and Delta, last year pledged to reach carbon neutrality by 2030, forcing its tens of thousands of suppliers to step up decarbonization or risk losing business. TSMC's key foreign shareholder Blackrock sent a letter to Chairman Mark Liu asking him to pay close attention to the company's carbon emissions and climate change initiatives. Delta, whose multinational clients also include HP and Dell, also joined RE100 earlier this year. It went even further and vowed its global manufacturing facilities would be completely powered by renewable energy and reach carbon neutrality by 2030. The company has set an aggressive carbon price of $300 per ton for its internal business divisions from this year onward. It collects the fees internally and reinvests them in its renewable energy efforts.

But going carbon neutral and reaching the goal of net zero by 2050 will surely increase costs. TSMC estimated they would rise by 2% to 3.3% of its revenue by 2050, according to its latest Task Force on Climate-related Financial Disclosures report published in mid-September.

Meanwhile, Taiwanese authorities have not yet introduced compulsory carbon pricing even though Asian countries including Japan, South Korea, Singapore and China have done so. The Tsai administration currently plans to set a carbon price and start fee collection for large carbon emission industries such as cement, steel, and opto semiconductors from 2023. Some argue Taiwan's policy sluggishness will harm its industrial competitiveness, as rivals elsewhere have impressed potential customers by embracing carbon markets. 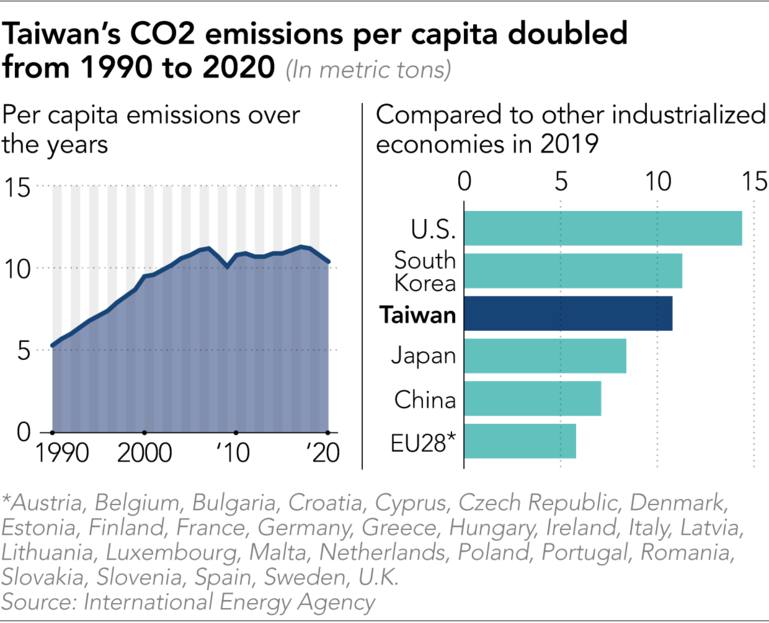 Taiwan aims to emulate the few economies, such as the European Union, Japan and Canada, that have made a strong legal commitment to net-zero carbon emissions by 2050, Huang said. "It will still take time for the new draft of the act to really pass and require many further discussions on carbon pricing and how to charge those fees. But the new regulation will certainly come with stronger enforcement," Huang added. "The first collection of carbon fees in Taiwan will be as early as 2023."

Lin Tze-luen, deputy executive director of the government's Office of Energy and Carbon Reduction, said the Tsai administration plans to reduce the use of coal. But it will also increase the use of both liquid natural gas and renewable energy, in a sign of the uneasy balance it is trying to strike.

"Taiwan isn't bad, but Taiwan can do better," said Lin, who is also a professor at National Taiwan University's Political Science Department. He added that the island needed to decarbonize to maintain economic competitiveness as well as protect the environment.

A final part of Taiwan's decarbonization dilemma is the task to convince citizens of the importance of net-zero emissions, said Chen Yen-haw, director of the Taiwan Institute of Economic Research, a key local think tank. He said people needed to be reassured that an economy built up to be an export powerhouse would not harm itself by being too hasty to cut carbon emissions.

"Any overly aggressive planning could hurt economic growth," Chen warned. "To succeed, the national energy transformation will not only need time, but the public's recognition and understanding why we are doing this."