BEIJING/TOKYO -- China's inability to crack its dependence on coal power threatens to undermine the country's pledge to achieve carbon neutrality by 2060.

Last year, China built enough coal-fired power plants to provide 38.4 gigawatts of electricity, data from U.S. think tank Global Energy Monitor shows, far surpassing the 8.6 GW from plants that were retired. This net gain in capacity, the equivalent of 30 nuclear facilities, suggests that coal will remain king in China for the foreseeable future.

A state-of-the-art coal plant in the inland province of Gansu began commercial operation in November, using equipment made by Harbin Electric, a state-owned enterprise.

The plant vastly reduces emissions of sulfur dioxide and other particulates, and it replaces an old, defunct facility, so the station is deemed a contributor to decarbonization. Its location in a coal-mining region eliminates the carbon dioxide that would be produced by transporting the fuel.

"We aim to have CO2 emissions peak before 2030 and achieve carbon neutrality before 2060," President Xi Jinping said in September during an address to the United Nations. To realize that vision, China has moved to expand capacities in wind, solar and nuclear power.

Chinese experts forecast that total wind, solar and nuclear energy capacity will more than triple by 2030 from last year. Those renewables are expected to provide a 47% share, up from 27%. Thermal power's share in the electricity mix would drop 16 points over that decade, but remain a main source at 41% in 2030. 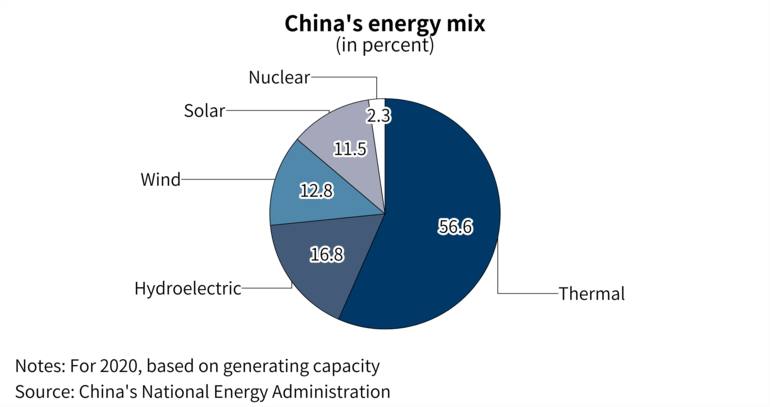 Chinese coal plant builders have used the technology and cost competitiveness developed amid brisk domestic demand to export the facilities. Harbin Electric constructed a plant in Dubai that opened last year, the first of four to go online by 2023.

Yet the rest of the world is clearly moving away from coal. Outside of China, coal plant capacity shrank by 17 GW on a net basis when closures are compared with new construction, Global Energy Monitor data shows.

The U.S. retired 11.3 GW worth of coal-fired facilities while building no new plants. President Joe Biden is expected to shift the country further toward renewable energy as he prioritizes combating climate change. The U.K., which seeks to eliminate all coal-fired plants by 2025, scrapped a large capacity last year.

In Japan, new coal plants exceeded retirements. The government plans to suspend or shut inefficient plants in phases by fiscal 2030. But that strategy indicates that high-efficiency coal plants will remain in use.

Japanese companies are scrambling to respond to the decarbonization trend. Jera, the country's largest power generating group, has pledged to achieve net-zero carbon dioxide emissions by 2050, setting the goal ahead of the government.

Japan's three megabanks have said they will reduce all outstanding financing toward coal power projects to zero.