Grab and Gojek commit to 'carbon zero' ahead of public listing The welfare and pay of gig economy drivers have come to the fore as companies focus on ESG.(Photo by Ken Kobayashi)
KENTARO IWAMOTO and SHOTARO TANI, Nikkei staff writersJuly 19, 2021 12:10 JST | Singapore
CopyCopied

From July 14, Grab in Singapore started a new service that enables users to hail a hybrid car or an electric car for the same fare as its normal ride-hailing option. That is one of the company's latest initiatives to promote environmentally friendly transport systems.

In its first ESG report issued last month, Singapore's Grab said it is aiming for "a net-zero carbon future" through various measures, including adoption of electric vehicles in its fleet, as well as reforestation programs. It did not set clear goals in the report, but said it would announce science-based net-zero carbon targets and a roadmap next year.

"As we intend to become a public company, we are increasing our commitment to high levels of transparency and accountability when it comes to sustainability reporting," Grab CEO Anthony Tan and co-founder Tan Hooi Ling wrote in the report, referring to its plans to go public in the U.S. later this year.

Indonesia's Gojek, one half of the newly formed tech conglomerate GoTo, became one of the first startups in Southeast Asia to openly set out ESG goals when it announced its plans in late April.

A cornerstone of its plans is the pledge to produce zero carbon dioxide emissions by 2030, which will entail transforming all its fleets to electric vehicles. The startup also pledged to produce zero waste, starting with managing the use of single-use plastic across its ecosystem. Its pledges will apply to Tokopedia as well, with both companies merging to form GoTo in May. 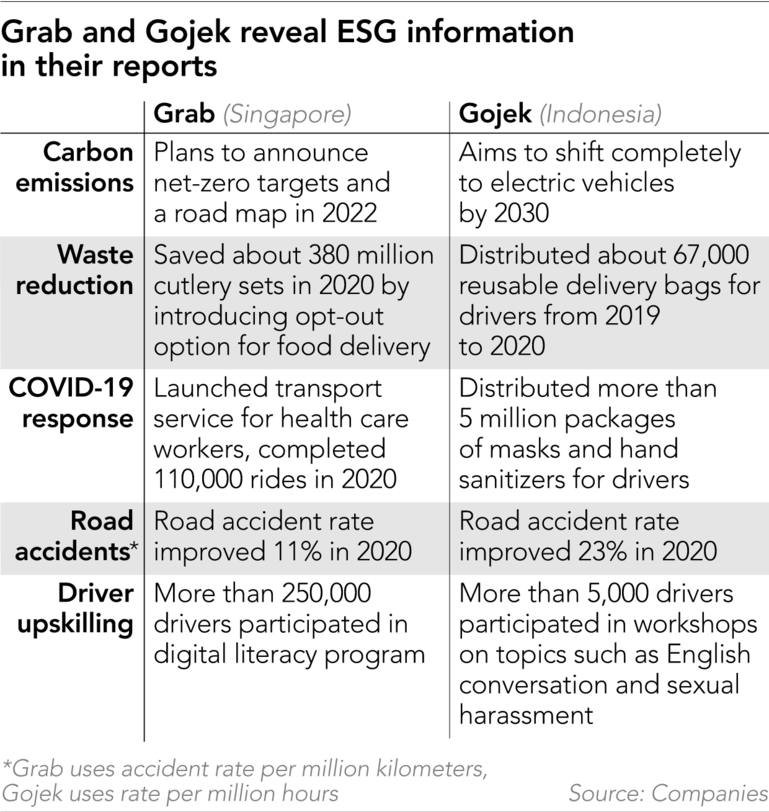 "There is a pressing need for the private sector to take action and help address the most critical environmental and social issues," said Andre Soelistyo, CEO of GoTo, upon the announcement of the plan. "As Gojek continues to grow in size and strength, with millions relying on our platform daily, we have a responsibility to do so sustainably." GoTo also plans to go public later this year.

Grab's and GoTo's reports -- which also cover other non-financial areas such as empowerment of small businesses, safety performance of their transport services, and diversity of the workforce -- show that Southeast Asia's tech startups are starting to embrace the ESG concepts as they grow and become more essential to society.

"We're still at the starting block," Patrick Cao, President of GoTo, acknowledged in a webinar on June 29. "But the awareness is definitely there."

Among other startups, Singapore-based Carro, one of the region's biggest online car marketplaces, on July 1 launched low-interest car loans to support adoption of hybrid and electric cars. Singapore's gaming hardware maker Razer, which is listed in Hong Kong, recently established a $50m "green fund," with its first investment made in a Singaporean environmentally friendly homecare products startup.

The ESG concepts -- often used as metrics to measure a company's risks outside of a financial accounting framework -- emerged in the 2000s. They have drawn more attention throughout the COVID-19 crisis as people became more considerate of the sustainability of businesses in the post-pandemic recovery, with startups -- which face less pressure from public investors -- also following the trend.

In Southeast Asia, where developing economies are dominant, many startups already naturally adopt some ESG elements in their businesses, such as e-payment services that helps financial inclusion.

"Tech founders and investors as a general rule of thumb are more familiar with ESG concepts given that they came to the forefront at the same time as these millennial founders were starting out," Justin Tang, head of Asian research at United First Partners in Singapore, pointed out.

Lie told Nikkei Asia that other investors joining its funds are also aware of this. "Expectations that ESG factors are integrated into investments have certainty heightened over the last few years."

Indonesia's East Ventures said it values companies that contribute beyond economics. "It is great that we operate in Indonesia and almost all portfolio [companies] have impacts from the social angle," said Melisa Irene, partner of the venture capital. "Software as a Service [startups] improve micro SME productivity, e-commerce and marketplace increase access to affordable goods," she said.

She added: "ESG has been a common practice in businesses and we are taking steps to have ESG strongly integrated to our investment process."

Besides environmental initiatives, there are other areas that startups should also give more consideration, such as corporate governance. The work environment for employees has also become more important, after the culture of overworking at some fast-growing tech companies in China came under the spotlight. There are also calls for better treatment for workers in the "gig" economy, such as ride-hailing drivers.

One hurdle for young startups is that taking ESG factors into consideration in their operation could prove expensive or burdensome. But Tang of United First Partners pointed out that a company can start ESG activities whatever level it is at and build up toward full compliance.

"In fact, a proper understanding and implementation of ESG principles will reveal it as a stepping stone to growth as opposed to being a hindrance," it said.