TOKYO -- One of the world's largest forest preservation projects, in Indonesia, has issued credits up to three times more than the amount of carbon dioxide it is likely to absorb, Nikkei has found, an apparent incongruity that if repeated could lead to a flood of unworkable "carbon zero" projects.

Royal Dutch Shell, Volkswagen and Takeda Pharmaceutical -- more than 20 globally known companies in all -- are flocking to the credits offered by the forest preservation project in Central Kalimantan, on the island of Borneo. The project is intended to conserve tropical peatland as a vast carbon sink and prevent lumbering by suspending development rights and creating jobs.

A carbon credit is a permit or certificate that allows the holder to emit 1 ton of CO2. Companies can use these credits to offset the CO2 they emit through their industrial production and other activities. Carbon credits can be issued based on the amount of CO2 that will be absorbed as long as forests are conserved.

There are two types of carbon markets, regulatory compliance and voluntary. Compliance markets are used by companies and governments that by law have to account for their greenhouse gas emissions, regulated by national, regional or international carbon reduction regimes. Voluntary markets are self-explanatory.

Forests that absorb more carbon from the atmosphere than they emit are considered carbon sinks. The absorption is done by trees through photosynthesis. Once absorbed, carbon is bound up in sugar, then released as oxygen.

Estimating that CO2 emissions will be reduced by an average of 7.45 million tons per year over 60 years, the project since 2017 has issued voluntary credits equivalent to 30 million tons and brought in an estimated $210 million. The credit-producing forest is one of the world's largest such projects. Royal Dutch Shell has already purchased credits to offset more than 2.2 million tons of CO2 and is expected to continue buying them.

It is not alone. Since the legally binding Paris Agreement was adopted in 2015, the decarbonization market has mimicked an ever-expanding asset bubble.

The Emissions Trading System (ETS), based on EU regulations, allows companies that go over their CO2 emissions quotas to buy credits from companies that are under their caps. As emission limits are lowered every year, the price of a credit has risen to more than 60 euros ($67.61) from 4 euros in 2016. According to the World Bank, credits worth more than $26 billion went through the major ETS market in 2020. 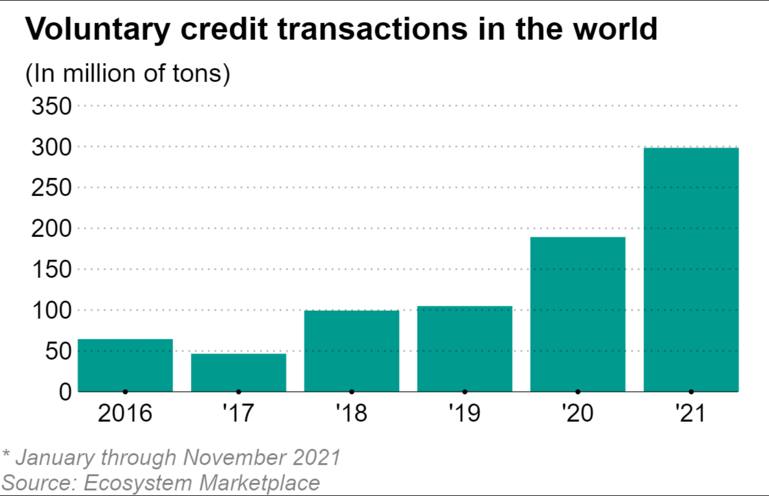 Companies that go over their quotas are being squeezed by the rising cost of complying with regulations on one side and by investors and other parties urging them to help save the planet's ability to sustain life on the other. This has many emitters turning to voluntary credits, which cost a few dollars per ton.

They are available through a private registry system that offers CO2 credits accruing from forest conservation, afforestation or energy-saving decarbonization efforts and are validated by a third party. Although these credits cannot be used to comply with official regulations, they can help companies emphasize their commitment to reducing emissions.

More and more companies are shopping in the inexpensive voluntary markets. Trading volumes have jumped seven times over the past four years, to 300 million tons, while the average price of forest and land-use carbon credits has increased by 40%, to the $4 level. It has topped $10 in futures trading.

But irregularities could arise in the forest carbon credit market if the amount of potential deforestation is initially overestimated and a project later issues more credits than carbon emissions it can offset.

Nikkei discovered this possibility by analyzing data in the Katingan Mentaya Project. Using satellite data from the University of Maryland, Nikkei analyzed changes in the forest area in Central Kalimantan and found that except for a year of large-scale fires, forests without concessions decreased by only about 1% a year.

The project proponent insists there are threatening signs of deforestation in areas neighboring the project.

Despite this, David Gaveau, founder of The Tree Map, a deforestation monitoring database, pointed out: "There is [only] one pulp paper concession adjacent to the project area. The concession is inactive."

The Indonesian government introduced a moratorium on new forest developments in May 2011, six months after the project began. Of some 1,500 sq. km covered by the project, the possibility of plantation development has been almost fully eliminated by the moratorium. Now, one-third of the project's anti-deforestation efforts are redundant. Despite about five years between the moratorium and 2016, when the credit validation process was completed, the project manager failed to adjust estimates regarding the amount of potential felling in a certain area, issuing credits to cover the entire area.

Nikkei's analysis of data on forest development permits compiled by the Indonesian government also shows that by the time the project began in 2010, the area granted for pulp plantation development had already plummeted. 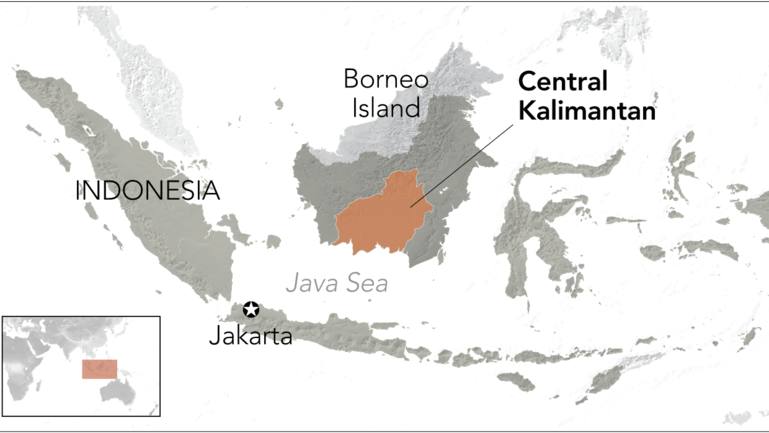 Royal Dutch Shell, Volkswagen and Takeda Pharmaceutical -- more than 20 globally known companies in all -- are flocking to the credits offered by the forest preservation project in Central Kalimantan, on the island of Borneo.

As forested areas in the province subject to the moratorium will decrease only slightly, word is circulating that the project is overstating the area prone to deforestation.

The project's manager argues the regulations are hardly effective and that the risk of wanton development remains.

"The project's baseline assessment, the work that demonstrates the project's additionality, shows that had there been no intervention, emissions from deforestation would have occurred due to conversion to acacia plantations," said Dharsono Hartono, president director of Rimba Makmur Utama. "This process would have continued legally regardless of the subsequent moratorium."

"Additionality" refers to the "extra good for preventing global warming" that a project is expected to create. If regulations like Indonesia's development moratorium do their job, additionality cannot be validated. SCS Global Services, which reviewed the project before issuing the credits, argues that the regulations were not subject to review at that time.

"We are required to assess the scenarios and regulations that exist at that time. Since this project has a start date of 2010, we would not have considered regulations that came into place after 2010. While we understand that this was definitely discoverable at the time of validation, it was not in the scope of our assessment services for validation," said Christie Pollet-Young, director of Greenhouse Gas Verification at SCS Global Services.

The Indonesia hubbub is hardly unique. In Peru, huge amounts of carbon credits were issued for the sake of protecting forests in a national park, though the possibility of reckless exploitation was very low.

Surveying 67 projects in various countries, Compensate, a Finnish nonprofit organization combating climate change, said, "More than 70% of those projects have questionable additionality or unreliable baseline resulting in overestimating the potential project benefits and the issuance of phantom/ghost/fake credits."

"If buyers of credits that do not accurately reflect the amount of CO2 reductions increase, the effectiveness of measures against global warming will weaken," said Naoki Matsuo, the principal policy researcher at the Institute for Global Environmental Strategies.

To improve the quality of voluntary carbon credits, loopholes should be closed to project promoters and third-party certification organizations. It is crucial that standards for the issuance of credits be tightened and made uniform.

In addition, regulations must be stricter; five- to 10-year screening periods for projects must be shortened. The volume of credits should more flexibly align with forest conditions and project environment changes. Using satellites to spy on forests and more frequently collect data on them would also be effective.