TOKYO -- Japanese parliament on Wednesday turned into law Prime Minister Yoshihide Suga's pledge to go carbon neutral by 2050, setting in motion a technology race that will determine its economic standing in a post-carbon world.

At the forefront of that race are solid-state batteries, a technology that is considered a safer alternative to the lithium-ion batteries that are now used for electric vehicles. With Toyota Motor, Panasonic and Idemitsu Kosan leading the world in related patents, Japan has a real chance of taking the lead in the field.

As Japan, the U.S., Europe and China vow to achieve net-zero carbon emissions, total investments are expected to reach $78 trillion by the middle of the century. Japan will seek to maintain its technological edge in solid-state batteries and hydrogen while trying to catch up to rivals in carbon storage.

Revisions to a law promoting measures against climate change were enacted following approval by the Upper House and are slated to take effect in April. By codifying Suga's net-zero target, the government seeks to encourage long-term investments by companies.

When it comes to lithium-ion batteries for electric vehicles, the market is dominated by China's Contemporary Amperex Technology Co. Limited, or CATL, and LG Chem of South Korea. But solid-state batteries can cover longer distances on a single charge, making them a highly anticipated next-generation power source.

Toyota plans to release an electric vehicle equipped with the battery by 2025.

Renewable energy represents another key to decarbonization. In the 2000s, Japanese companies like Sharp and Sanyo Electric wore the crown in the global solar panel market. But cost-competitive Chinese rivals now make up nearly 80% of deliveries worldwide.

Now Toshiba and Ricoh are developing perovskite solar panels, a lightweight film-like alternative that can drive Japan's comeback to the field. 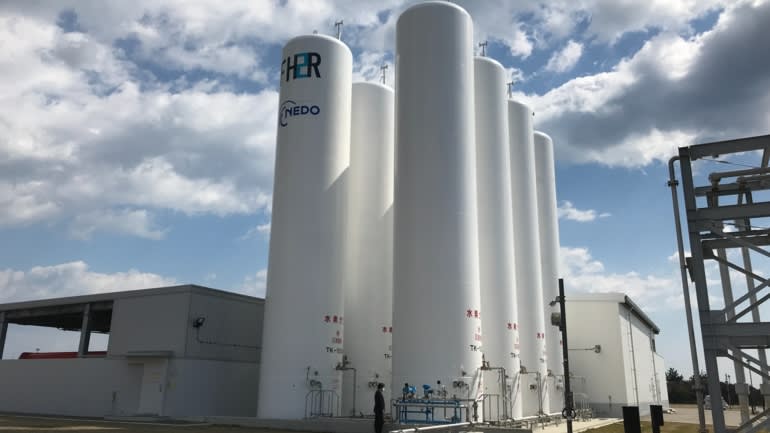 Fukushima Prefecture is home to one of the world's largest hydrogen storage facilities.

Meanwhile, hydrogen is emerging as a promising energy source for carbon-heavy industries like steel. The big three Japanese steelmakers are jointly researching the use of hydrogen.

An experimental blast furnace that deploys a reduction process using hydrogen has been built in Nippon Steel's East Nippon Works in Kimitsu in Chiba Prefecture. The goal is to commercialize the technology by 2030. By using hydrogen instead of coke -- a fuel derived from coal -- and by combining carbon-capturing technology, the process will reduce carbon emissions by 30%.

For hydrogen-related patent applications submitted outside the country, Japan has held the lead globally since 2001, according to Astamuse, a Tokyo-based analytics firm in which Nikkei has a stake. Japan is far ahead of the pack with over 800 applications filed in 2019, followed by Germany, South Korea and the U.S.

Carbon capture and storage is another trump card Japan holds in lowering greenhouse emissions. The technology extracts carbon dioxide from emissions and stores the byproduct in underground spaces.

The U.S leads in this field with 37 carbon-capture facilities either built or in planning stages. Although Japan is far behind, J-Power and Toshiba are developing the technology for thermal electric plants. Japan is now home to demonstration projects in six different locations.

Japanese automakers have pioneered hybrid vehicles such as the Toyota Prius that have contributed to reduced emissions. But EVs are gaining traction in Europe and China. Diverting hybrid technology to the development of EVs will be essential to maintaining a competitive advantage.