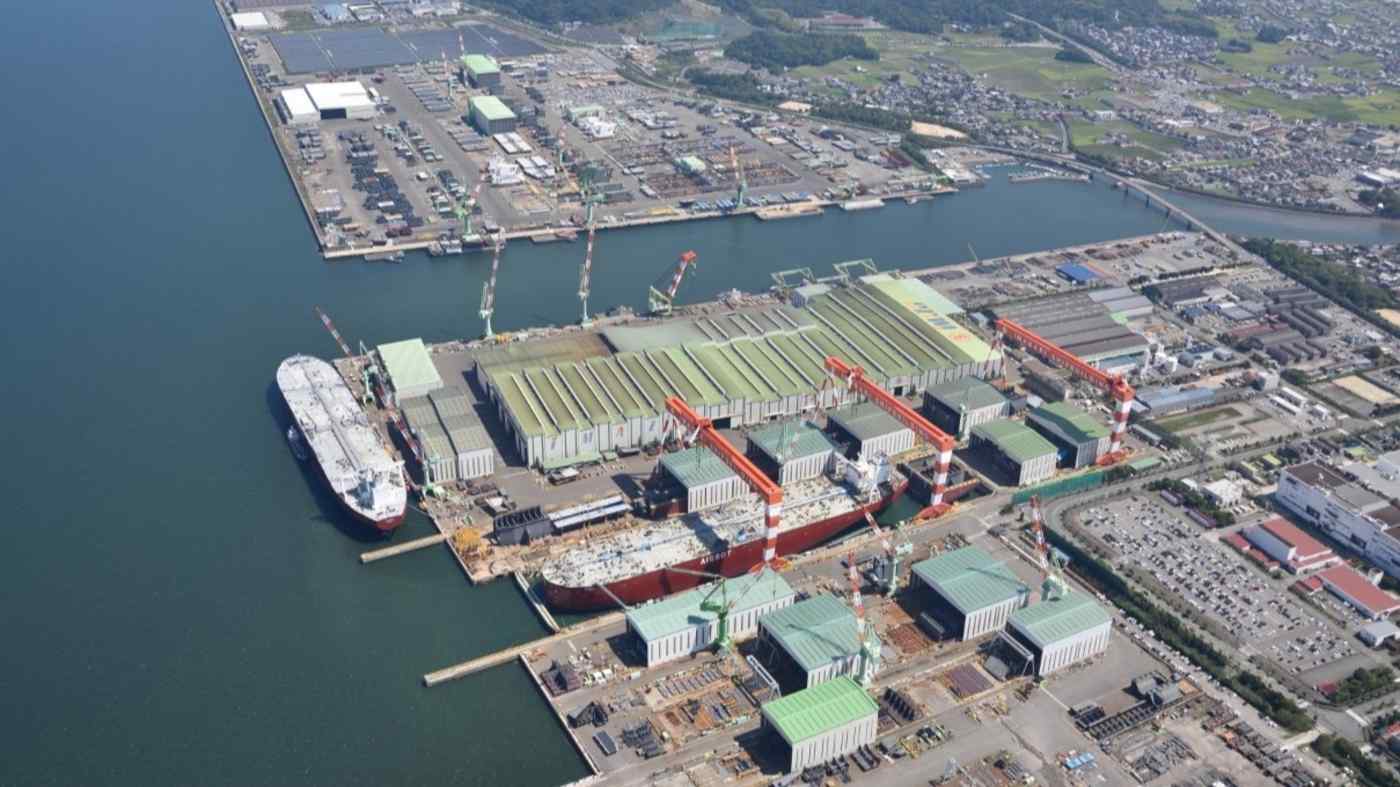 TOKYO -- With decarbonization emerging as a priority in the traditionally emissions-heavy shipping industry, Japan's Imabari Shipbuilding aims to launch a cargo vessel that runs entirely on ammonia by 2026.

No ammonia-powered ships have been built to date, but the fuel is considered a key green energy source for the future. Imabari looks to take a lead in the cutting-edge field both in terms of technology and rule-setting, possibly regaining some of Japan's market share in shipbuilding lost to China and South Korea over the last several decades.

Imabari unit Nihon Shipyard will develop a bulk carrier capable of carrying over 200,000 tons, designed to transport iron ore and other cargo. It will be built at Imabari's Saijo shipyard in Ehime Prefecture.

Hydrogen-powered vessels also run without emitting carbon dioxide into the atmosphere. But liquefying hydrogen so it can easily be transported means cooling it down to minus 253 degrees C and carries a risk of explosion. Hydrogen also releases less energy when burned than heavy oil, so ships would need to quadruple the size of their fuel tanks to travel the same distance on hydrogen, which in turn means less cargo space.

Meanwhile, liquid ammonia would need to be cooled to minus 33 degrees C. It releases more energy than hydrogen when burned, so ships would only require 2.5 times as much fuel storage than if they were running on heavy oil.

Imabari's new ship will come with plenty of cargo space as well as a newly developed storage tank that prevents ammonia from evaporating. Partner trading house Itochu will set up refueling stations at various ports so the ship can top up a smaller tank more frequently.

Because ammonia tanks need to be extremely airtight, Imabari's ship is expected to cost at least 30% more to build compared with a conventional cargo vessel. Still, the company expects significant demand as more shippers and logistics providers seek to curb emissions during the shipping process.

Japan's shipbuilders controlled 53% of the global market at their peak in 1984, according to IHS Markit. But that figure has since dropped to less than 10% with the rise of cheaper Chinese and South Korean competition. Mitsui E&S Holdings has decided to essentially stop building commercial ships. Japan Marine United will stop building new ships as well.

Japanese players are now also feeling the heat in next-generation cargo ships, with rivals like China's state-owned Dalian Shipbuilding Industry Company and South Korea's Samsung Heavy Industries believed to be making inroads with ammonia. Imabari will work closely with international rule-setting organizations in hopes of gaining an edge in commercializing the technology.

Ammonia is toxic. Even small amounts of it in the air can cause asphyxiation, and safeguards such as preventing the fuel from entering cabins will be critical for real-life use in ships. Imabari aims to partner with groups like the American Bureau of Shipping and the Norwegian-German DNV to establish technical standards for the vessels ahead of its competitors in order to attract more orders.

Ammonia is expected to account for 46% of energy consumed in shipping in 2050, up from the 8% projected for 2030 and more than double that of hydrogen, according to the International Energy Agency. Many shipping companies are already making plans to incorporate the fuel into their fleets. 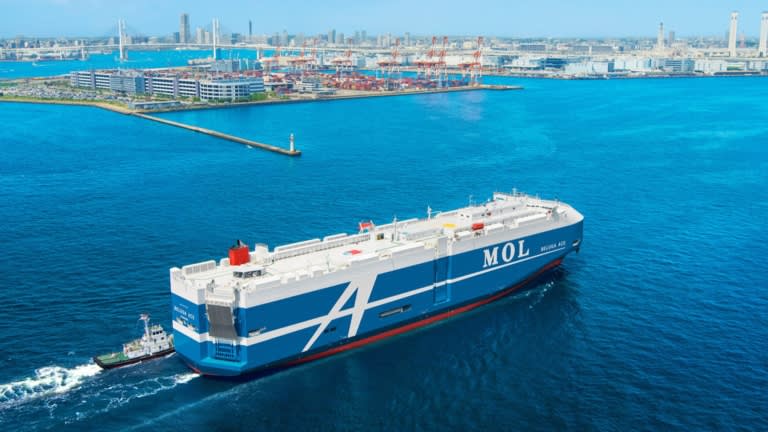 A Mitsui O.S.K. Lines automobile carrier travels to its destination. The auto industry is increasingly requiring that shippers decarbonize operations.

Mitsui O.S.K. Lines plans to acquire an ammonia-powered vessel in 2028, two years ahead of its previous schedule. It will invest 900 billion yen ($8.18 billion) by 2035 to create a 110-vessel fleet running on ammonia and other next-generation fuels.

"We expect ammonia-fueled engines to be developed in 2025 and for vessels equipped with those engines to become available around 2027 or 2028," said Toshiaki Tanaka, chief environment and sustainability officer at Mitsui O.S.K.

"The development of ammonia-fueled ships is advancing faster than expected, and we may be able to adopt the technology before 2034," said Takaya Soga, senior managing executive officer at Nippon Yusen. The maritime shipper hopes to deploy an ammonia-fueled car carrier as early as fiscal 2029.

Factoring into this shift among marine shippers are new goals among automakers to decarbonize the entire life cycle of vehicles from production and transport all the way to disposal. Volkswagen requires shippers to use vessels that burn liquefied natural gas, which emits less carbon dioxide than fuel oil.

With shipping clients poised to make further decarbonization demands, marine transporters and shipbuilders are taking the initiative in responding to those stipulations.

Development is moving forward on ammonia fuel engines. MAN Energy Solutions, based in Germany, seeks to commercialize an ammonia engine for large vessels in 2024. In Japan, Mitsui E&S Holdings is developing an engine that will be supplied to Imabari.

LNG is currently the fuel of choice for fielding green ships. LNG emits 20 to 30% less carbon dioxide than fuel oil. But as the marine shipping market has slumped in the recent past, "Japanese shippers have stalled in deploying" LNG ships, said a source at Imabari.

China has meanwhile expanded the adoption of LNG ships, and it appears that almost all container ships use that fuel. Because Chinese shipbuilders have developed technology to make LNG tanks at low cost, Japanese rivals cannot easily make up ground in this field over the short term. Japan's ability to take the lead in launching eco-friendly ships for the next generation will likely determine whether the national shipbuilding industry will sink or stay afloat.