Investments in wind turbines and other clean-energy technologies must grow tenfold by 2050 if the world is to reach its climate goal, according to the IEA.   © Getty Images
AKANE OKUTSU, Nikkei staff writerOctober 13, 2021 13:55 JSTUpdated on October 13, 2021 19:52 JST | East Asia
CopyCopied

TOKYO -- If the world achieves carbon neutrality by 2050, Asia-Pacific would play a major role in a $1.2 trillion global market for selected clean energy technologies, according to a report by the International Energy Agency released on Wednesday.

But to get on track for net-zero carbon dioxide emissions by midcentury, the world must start investing more than triple what it is now to install emission reduction technologies and carry out other tasks. By 2030, the figure would have to be more than $4 trillion, according to the latest World Energy Outlook report.

Investments in wind turbines, solar panels, lithium-ion batteries, fuel cells and electrolysers, used to generate hydrogen, would grow tenfold by 2050 compared to 2020. These five technologies combined would dwarf today's oil industry and its revenues, according to the report.

Such a drastic shift would present significant opportunities to the Asia-Pacific region, which is estimated to greatly increase its market share over the decades.

There are pitfalls, however, such as the large gaps between the net-zero ideal and the policy initiatives that have been announced, indicating that humankind has a herculean job ahead of it to keep average global temperatures from rising more than 1.5 C from preindustrial levels. Currently, stated policies would create an annual market worth less than a third of what the ideal scenario promises.

The report warns that a lack of bold investments for future energy needs and "uncertainties over policies and demand trajectories create a strong risk of a volatile period ahead for energy markets." It also suggests that price volatility for key minerals such as lithium, cobalt and nickel could push the required investments higher.

According to the report, to reach carbon neutrality by 2050 supplies of renewable energy will have to be about 362 exajoules, more than five times the 2020 supply.

In 2020, the Asia-Pacific region supplied 25.8 exajoules of renewable energy.

Meanwhile, to reach the goal, total use of coal should decline by almost 90% and that of natural gas by 56%. The report says that a lot of the remaining use of fossil fuels in 2050 should be combined with the use of an emission reduction technology known as carbon capture, utilization and storage.

And if the world does achieve its net-zero goal, total energy supplies would decline about 8%. By 2030, the use of coal has to decrease by more than 50% and that of oil by about 20% if the world is to get on track toward the goal.

Under the stated policy scenario, the supply of renewable energy is projected to increase by less than three times. Natural gas, oil and coal combined would increase by 5%, accounting for 66% of the total energy supply. While global carbon dioxide emissions fell in 2020 due to the pandemic, the current stated policies point to a rebound in emissions, leading to 36 gigatons worth in 2030 and staying above 30 gigatons in 2050. 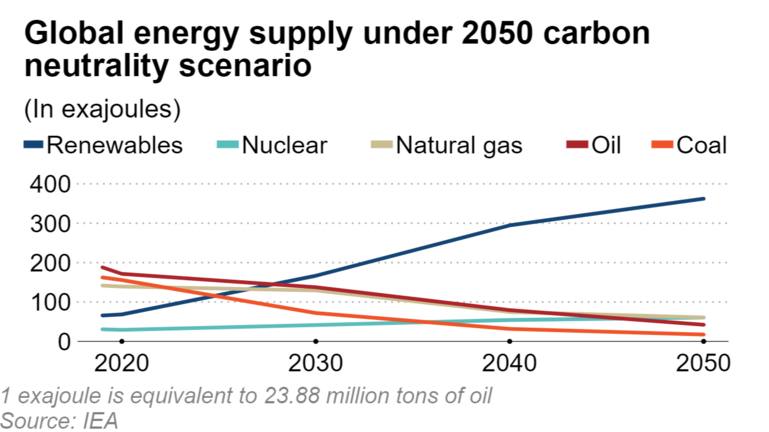 Even under the "announced pledges scenario," which assumes that various governments' carbon neutrality commitments will be met, the global temperature rise would be around 2.1 C by 2100.

"The world's hugely encouraging clean energy momentum is running up against the stubborn incumbency of fossil fuels in our energy systems," IEA Executive Director Fatih Birol said in a news release. Referring to the 26th U.N. Climate Change Conference (COP26), which begins on Oct. 31, governments should give "a clear and unmistakable signal that they are committed to rapidly scaling up the clean and resilient technologies of the future," Birol said.

COP26 President Alok Sharma in a speech on Tuesday called the phasing out of coal his "personal priority." He acknowledged that the Group of Seven leading industrial nations as well as South Korea and China have made commitments to end or limit support for new coal-fired power plants. But, he added, "we still need the G-20 to tackle domestic unabated coal power use [not combined with CCUS]."

On top of canceling new coal projects, the IEA's net-zero scenario suggests existing coal-fired power plants need to be aggressively retired. Eliminating an average of 90 gigawatts of coal-fueled power during the next decade would remove about 40% of the existing coal power base by 2030. To prevent employment and energy supply shocks, existing power plants should be retrofitted or repurposed for CCUS or to use low-emission fuels such as biomass and ammonia, the report suggests.

The report also refers to the impact of high fossil fuel prices as "not clear cut."

Birol said in a Wednesday press briefing that high fossil fuel prices are due to economic recovery, extreme weather events that affected electricity output, and maintenance works that were postponed last year. He emphasized that the problem was not the result of the shift to cleaner alternatives such as renewable energy.