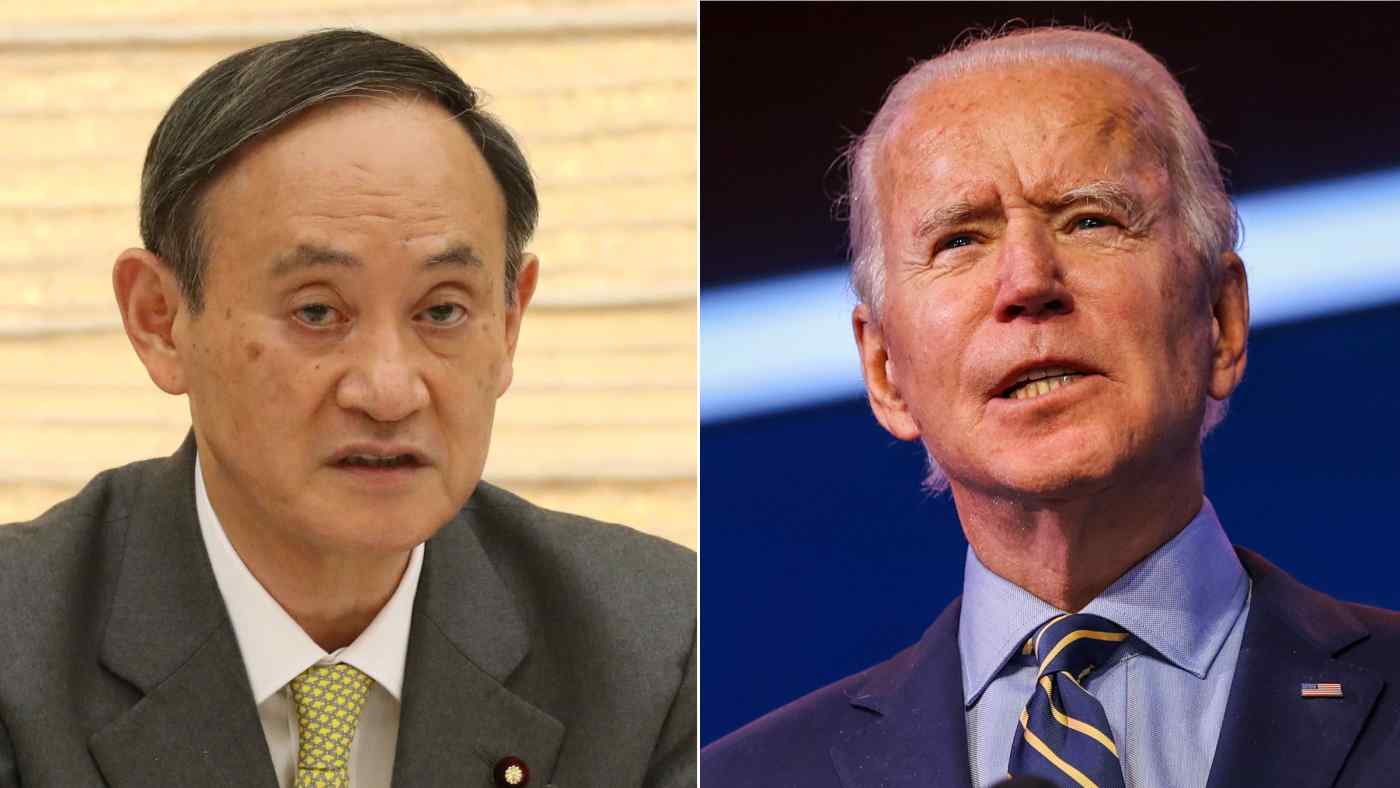 TOKYO -- Japanese Prime Minister Yoshihide Suga plans to propose a high-level dialogue with the U.S. on reducing carbon footprints when he meets President-elect Joe Biden in the coming months, Nikkei has learned.

Suga plans to visit Washington as early as February for his first summit with Biden, who will take office on Jan. 20. The plan is to have the two sides agree to the framework then, with the first meeting taking place by March, seeking to spur bilateral cooperation in clean energy technology.

By setting up the dialogue, Suga hopes to highlight joint efforts by the two countries to fight climate change, a field where they are seen as lagging. The summit will serve as a venue for the two leaders to confirm their commitment to the issue.

Biden has pledged to bring the U.S. back to the Paris climate accord, from which the country left under President Donald Trump. The president-elect has also promised to achieve net-zero greenhouse gas emissions by 2050 at the latest and pour $4 trillion into environmental innovation.

Suga, for his part, promised in his October inaugural speech to parliament to achieve net-zero emissions by 2050. To that end, he plans to end sales of gasoline-powered cars in the mid-2030s.

The Japanese government plans to put a key cabinet member in charge of the dialogue, assuming that former Secretary of State John Kerry, whom Biden has tapped as the climate czar, will represent the American side. Former U.S. Secretary of State John Kerry speaks at an event of the "World War Zero" climate coalition during the U.N. Climate Change Conference (COP25) in Madrid in December 2019.   © Reuters

As a former senator who served in Congress for about three decades, Kerry has a lengthy diplomatic resume that includes a stint as the chairman of the Senate Foreign Relations Committee. He was the Democratic candidate for president in 2004 and served as President Barack Obama's second secretary of state.

As a figure who led the signing of the Paris climate accord, Kerry is keen on the issue, putting him and Biden are on the same page.

Antony Blinken, Biden's pick for secretary of state, served as a deputy secretary of state under Kerry. As the U.S. moves toward combating climate change, Kerry will serve as the chief international negotiator on that front.

In both Japan and the U.S., renewables make up less than 20% of the energy mix, making decarbonization an immense challenge.

One area of collaboration could be in the development of carbon recycling technology. If efficient capture of carbon dioxide can be realized, it would pave the way for the use of highly efficient coal-fired thermal power. Japanese and U.S. companies can share results of research and extend financial support.

In the green growth plan released by the Japanese government last week, there are plans to develop miniature nuclear reactors. Such reactors are considered safer than conventional reactors, and the U.S. possesses superior technology in that field.

Under the green growth plan, Japan aims to triple the contribution of renewable energy to total power generation to between 50% and 60% by 2050. Biden pledges to decarbonize the power generation sector by the year 2035.

The policy shifts by Japan and the U.S. will have an effect on the global debate surrounding climate change. Biden plans to hold a summit among major carbon-emitting nations within the first 100 days of his administration.

If Suga and Biden hammer out a climate response in their bilateral summit before the climate gathering, the two sides can take charge in the rule making.

The administrations of Trump and former Japanese Prime Minister Shinzo Abe faced criticism for putting climate change in the back seat. Japan, whose energy policy weighed heavily on coal, had signaled a cautious approach toward tough international standards, such as those put forward by the United Nation's Conference of the Parties, or COP.

Japan and the U.S. will apply joint pressure on China, which produces 30% of global carbon emissions, to cut its carbon footprint. Sino-U.S. tensions are expected to continue into the Biden administration, which will step up pressure to reduce emissions.

Japan will enter a dialogue with China to expand collaboration on the environmental front. Foreign ministers from both sides confirmed in a November summit that the two countries will set up a venue to discuss environmental policies.

Decarbonization will be a key theme in the international community in the year ahead. Beside the U.S. led climate summit, the U.K. will also host the COP26 gathering in November. London will also host the Group of Seven summit of major economies in the summer.

By cooperating with the U.S., Japan is looking to establish itself in the green diplomacy arena. Tokyo will lay out its efforts toward achieving net-zero emissions by 2050. The government will advocate for private-public support that leverages Japan's technological prowess in high-efficiency coal power as well as hydrogen power.