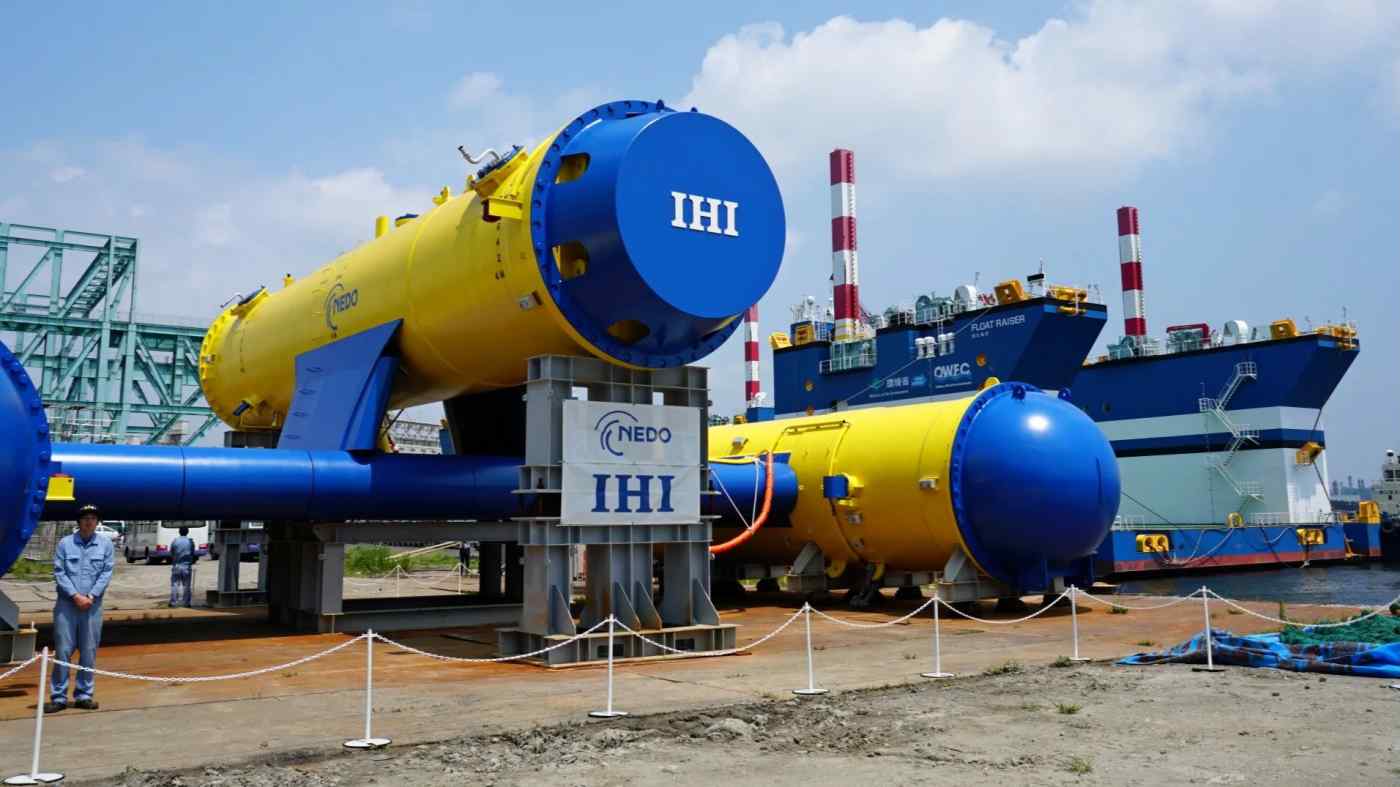 TOKYO -- Japanese engineering company IHI said Thursday it will soon conduct an extended pilot test on a turbine system that catches ocean currents and turn them into electricity, the first large-scale attempt to harness such ocean energy.

IHI unveiled a 30-ton prototype that will be capable of generating 100 kW of energy from rear propellers. The test will take place as soon as this fall and last for over a year.

The company will commercialize the technology as early as fiscal 2021. The aim is to set up a underwater current farm with a generation capacity of 200 MW, enough to power 3,000 households, by fiscal 2030, and keep building the farms at a pace of one a year.

The generator will be transported from a facility in Yokohama in early August and arrive at a location 10 km off the coast of Kuchinoshima, an island off Kagoshima Prefecture in southern Japan. The floating unit will be tethered 100 meters deep in the ocean, with the power generated to be transported through an underwater cable.

The generator will feed off the Kuroshio current, a Pacific current that goes up along the Japanese coast. "Kuroshio is one of the world's strongest currents and a promising energy source," said Shigeki Nagaya, IHI's development manager overseeing the project.

The operating efficiency of ocean-current power generation is said to be between 50% and 70%, higher than the 30-40% for offshore wind farms, or the 10-15% for solar-power generators.

IHI developed the generator with the New Energy and Industrial Technology Development Organization, or NEDO, a Japanese public-sector organization.

The cost to make a unit is estimated at 1 billion yen ($9.25 million). It takes 40 yen to generate one kilowatt at a small operation, but that is expected to shrink to around 20 yen for a large-scale farm built in fiscal 2030 or later.

IHI has high hopes for a market it is trying to create. "We foresee an operation worth hundreds of billions of yen," said Nagaya. The company anticipates expansion into other areas like the U.S. East Coast or Taiwan.

NEDO estimates that Kuroshio packs about 200 GW of potential energy. The organization has pioneered the underwater floating generator, and generators powered by oceanic tides have been embedded in sea floors off the coast of Scotland, among other places. The makers of these devices could emerge as rivals.