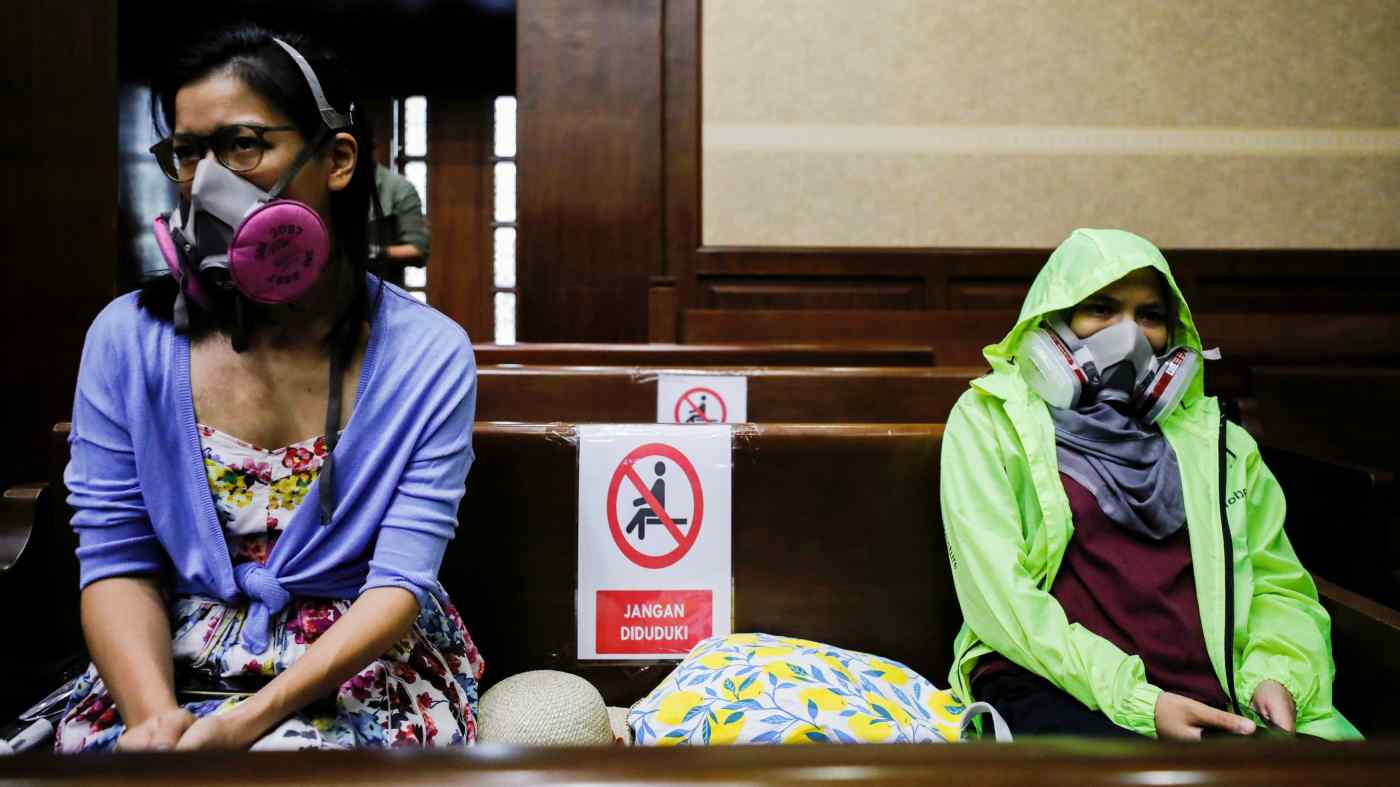 Activists wearing protective masks sit inside the Central Jakarta Court on Thursday during the hearing of a citizen lawsuit, done in an attempt to sue the government into taking action on Jakarta's air pollution.   © Reuters
ERWIDA MAULIA and SHOTARO TANI, Nikkei staff writersSeptember 16, 2021 16:55 JSTUpdated on September 16, 2021 20:58 JST | Indonesia
CopyCopied

JAKARTA -- An Indonesian court on Thursday found government figures including President Joko "Jokowi" Widodo and Jakarta Governor Anies Baswedan to have neglected the air quality in the nation's congested and polluted capital.

The air pollution in Jakarta, where PM2.5 levels are constantly higher than World Health Organization standards, is seen by experts as reducing life expectancy and hurting the nation's economy.

The judges for the civil lawsuit at the Central Jakarta District Court ordered Widodo to "tighten the national air quality standard to protect the health of humans, the environment and the ecosystem -- including the health of the sensitive population."

They also said other defendants -- including the environment minister, the health minister and the home affairs minister -- committed "unlawful deeds" in regards to "worsening air quality that threatens the health of millions of residents and has contributed to premature deaths and various illnesses."

Before giving their verdict, the judges said they considered arguments that the government has violated people's rights to healthy living guaranteed by Indonesia's constitution, as well as laws on human rights and environmental protection.

Ayu Eza Tiara, lawyer at the Jakarta Legal Aid Foundation who represents the plaintiffs, said they welcome the ruling, adding, "We hope the defendants will wisely accept the defeat and choose to focus on efforts to improve the air quality rather than doing useless things such as filing an appeal."

Baswedan said on Twitter that the Jakarta administration will not challenge the verdict and is "ready to implement the court ruling for better air in Jakarta." The central government has not responded to the verdict.

A longer list of orders was handed down to Baswedan, who was told to increase supervision over residents' compliance with air pollution-related regulations, such as through periodic emission tests for old vehicles and inventories of pollution sources from business activities.

The governor was also told to impose sanctions on offenders and inform the public of Jakarta's air quality status every year.

The ruling on the lawsuit, which was filed by a group of civilians in 2019, was initially slated to be delivered in May, but had been pushed back eight times. Tiara previously said that the delays reflected "that the panel of judges has not considered the right to clean air to be an urgent right [of the people] that the government fulfill."

The traffic is not the only cause of air pollution in Indonesia. Other factors such as the burning of fossil fuels and agricultural fires also reduce the quality of air.

"In Indonesia, the primary cause [of PM2.5] is not meteorological conditions, or the weather, or the length of the dry season, it is the burning of fossil fuels," Kenneth Lee, director of Air Quality Life Index at the University of Chicago, said in an online press conference in early September. "There's currently about 10 power plants that are within a hundred-kilometer radius of Jakarta. And these plants are allowed to emit 3-7.5 times more pollution, particulate matter than Chinese coal-fired power plants."

According to Lee, the current PM2.5 levels will reduce that the average life expectancy of Indonesians by 2.5 years compared to air pollution levels meeting WHO standards. He said the figure was five to six years lower in Jakarta on average.

Fires lit to clear land for plantations are another major source of air pollution in the archipelago, with consequences extending beyond its borders.

In a 2020 report based on two decades of studies, Greenpeace said seven out of 10 member states of the Association of Southeast Asian Nations are affected by haze generated by fires in Indonesia, and the haze "causes wide-ranging health problems including lung conditions and cardiovascular diseases."

Scientists at Harvard and Columbia Universities in the U.S. estimate the 2015 haze caused around 100,000 premature deaths in Indonesia, Malaysia and Singapore. The World Bank assessed the economic damage to Indonesia alone at over $16 billion.