JAKARTA -- The stench is overpowering, and it only gets worse as you approach the biggest landfill site in Southeast Asia.

The green grass on the embankments of the road leading into the Bantar Gebang landfill on the outskirts of Jakarta quickly gives way to trash -- stacked in piles as far as the eye can see, reaching the height of a 15-story building in places.

Large yellow excavators move mechanically on top of the mountains made up of so many colors they all merge into a brown or gray mirage. Plastic bags, food packages, rubber wheels, cardboard, drink cans, and everything else that Jakartans consume and throw away can be found here -- much of which turn to sludge when it rains.

The site that constantly threatens landslides is also home to thousands of impoverished families.

"The waste mountains have definitely grown taller now," said Tani'ah, who has been living in on the edge of the Bantar Gebang landfill with her family for 10 years. "Indeed, there have been rumors of the landfill closing for a while, but it has been business as usual so far."

Tani'ah, wearing a black headscarf and a long batik skirt, was hanging out with other women from the neighborhood. It was around 2 p.m. -- the men had just wrapped up Friday prayers -- and the women sat outside their complex of makeshift huts, watching over children running around. Tani'ah said she would later go scavenging herself.

She is one of around 20,000 people, according to an estimate by locals, who make a living from collecting trash in Southeast Asia's largest dump. More than 100,000 live in the landfill and its surroundings. 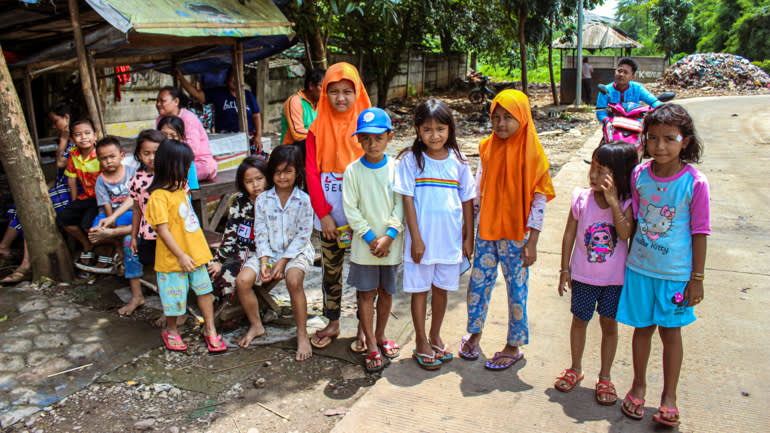 Villagers who live on the outskirts of Southeast Asia's biggest landfill site, near Jakarta. (Photo by Antonia Timmerman)

Authorities are struggling to dispose of the massive amount of waste created by the 35 million people estimated by Statistics Indonesia to live the Jakarta metropolitan area.

Asep Kuswanto, head of Jakarta Integrated Waste Management Bantar Gebang, the authority that oversees the site, told Nikkei Asia that Bantar Gebang is now officially overloaded. The trash has piled up to a height of 50 meters and every inch of the 110-hectare site is covered, but a lack of alternatives means the landfill has to continue operating.

"If it closes, where will Jakartans dispose of their garbage?" Kuswanto said.

Bantar Gebang opened in 1989. Located in the administrative district of Bantar Gebang in Bekasi City, the landfill sprawls across three districts and is divided into five zones. At its peak in January 2020, Bantar Gebang received over 9,850 tons of waste daily, data from landfill management show.

Trash processing in many Indonesian cities is still largely manual, relying on communities of waste pickers like Tani'ah and her family. But the work is dangerous, pays badly and offers no safety net.

Landslides often occur at such sites. In February 2005, heavy rains triggered a slide at the Leuwigajah landfill, which serves the cities of Cimahi and Bandung in West Java, killing 157 people and swallowing two villages, Greenpeace Indonesia said. That tragedy led to the declaration of National Waste Awareness Day by the Ministry of Environment and Forestry.

The Bantar Gebang landfill has also taken lives. In 2006, three scavengers were killed and several others injured in a landslide. One of the victims was four-months pregnant. In 2016, a woman died in another landslide, according to local news reports.

Intense rain triggered a collapse in early December. Several houses were hit by the avalanche, although no fatalities were reported.

The Jakarta government is racing against time to come up with solutions. In July last year, it banned single-use plastic bags, forcing store owners to provide environmentally friendly and reusable shopping bags.

Greenpeace Indonesia urban campaigner Muharram Atha Rasyadi said that was a welcome move, but the main problem was the wide array of single-use plastic products that needed to be regulated, not just plastic bags.

"This is not only the responsibility of regular citizens, but also the government and industries," he said. The Bantar Gebang landfill site near Jakarta is a source of income for thousands of poor families.   © Reuters

Late last year, the city administration sent business managers a document outlining an upcoming regulation on waste management. Businesses will be obliged to sort and transport waste to processing facilities, and carry out biodegradable waste processing, according to a document obtained by Nikkei Asia. A timeline for implementation was not specified in the paper.

To reduce waste before reaching the Bantar Gebang landfill, four intermediate treatment facilities that convert trash to electricity using incinerating technologies are being constructed at various locations across the capital. The construction kicked off in December 2018, but had since been delayed due to financing and regulatory problems, local reports said. The facilities are now expected to start operation in 2022.

However, this route has been heavily criticized by environmental groups who said the power plants would just release more emissions.

At the downstream level, efforts to deal with waste already in Bantar Gebang include a process called landfill mining and the building of a processor that can turn garbage into alternative energy, or refuse-derived fuel. The landfill mining facility extracts trash that has been there for at least six years to get materials that can be turned into compost, cover soil, and trash that can be further processed into refuse-derived fuel.

"These two facilities can each process up to 1,000 tons of garbage daily," Kuswanto said.

Environment activists have repeatedly stressed that efforts aimed at solving the waste crisis should be focused on the upstream level.

Sawung said more can be done by the government and businesses to prevent the production of waste in the first place, for instance, by banning styrofoam products.

"This was not solved [in last year's plastic ban]," Sawung said. "We recommend that the waste management is done as early as possible, so whatever goes into the landfill can be reduced to a minimum."

Ultimately, Jakarta's poor will be the first to feel the impact of the city's waste policies.

"What is clear is that we do not want the landslide incident at the Leuwigajah landfill to happen again," said Rasyadi, the Greenpeace campaigner.