Garbage from other Asian countries piles up on sacred island's shores FUKUOKA, Japan -- On a brisk day in mid-November, about 50 volunteers gathered to clean a beach on the southern island of Kyushu. It was roughly 60 km from Okinoshima island, a World Heritage site in the Genkainada Sea that is worshipped as a divine island.

Ocean currents funnel plastic waste and other garbage to this patch of sea. The beach was littered with plastic bottles and fishing nets. Many of the bottles had labels written in Chinese and Korean.

"How can we be proud of the sea around a World Heritage site when it's a mess like this," said one of the volunteers.

Plastic trash is a growing problem everywhere, but the volunteers here in the city of Munakata are exploring a new way to make cleaning it more efficient and less labor intensive. They, in conjunction with researchers, are using a robot and drone designed to do much of the heavy lifting.

The system they are developing could be valuable for the rest of the country. Clearing beach litter is becoming more difficult in many areas, due partly to the aging population, according to Satoko Seino, a Kyushu University associate professor. She heads the Institute of BC-Robop Coastal Engineering, which was formed by citizens' groups and researchers.

"What we're doing is developing ways to use cutting-edge technology to reduce the workload," she said.

The four-wheeled robot developed by BC-Robop, 1.4 meters long and about 200 kg, followed the volunteers as they combed the beach. They gathered trash in a basket on runners pulled by the robot, which can carry up to 15 kg of waste at a time. This time it transported about 180 kg of trash in 90 minutes.

The robot can recognize people and automatically follow them as they move around looking for trash. The researchers plan to equip it with a mechanical arm so it can pick up trash on its own.

The volunteers also used a large drone, developed by a company in cooperation with BC-Robop. Originally designed for disaster recovery work, it can seek out clusters of trash, lifting and transporting up to about 10 kg at a time.

Researchers envision a scenario in which it will fly to locations not accessible by vehicles, such as rocky shores, load up with large amounts of trash collected by volunteers and carry it to a boat anchored nearby for further transportation.

BC-Robop began experimenting with robots two years ago, prompted by growing concerns about contamination from marine waste washing ashore in the region. 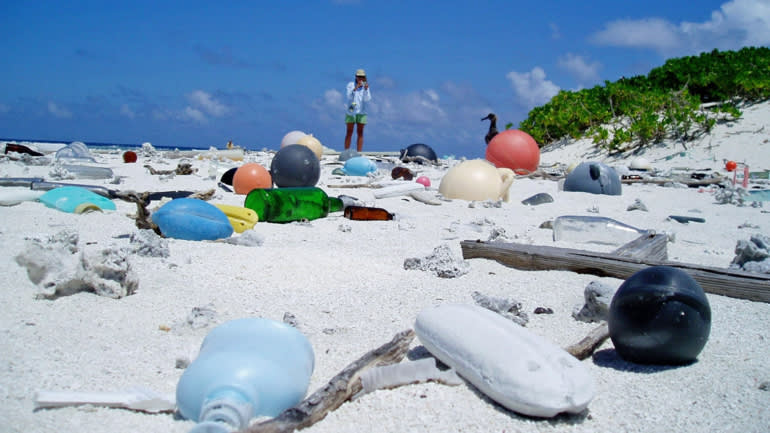 Plastics and other trash are washed up by the ton to blight beaches around the world.

The Genkainada Sea is a "hot spot of trash washing ashore" because of its location, according to a researcher. Marine garbage is carried on the Tsushima Current from the East China Sea, which abuts other Asian countries.

That has become a problem for Okinoshima, home to ancient ritual sites. Shinto priests of the Munakata Taisha shrine, which manages the island, clean its shores. More than an entire boatload of trash drifts ashore after a typhoon, they said.

Marine garbage is also seriously hurting fishermen. "Debris damages fishing nets, and that forced many of my friends to give up using gill nets," said Kosuke Gonda, a local fisherman.

Efforts to remove litter from the sea bed in the area started about a decade ago, but catch levels have remained just one-third of their peak.

Volunteers have cleaned coastal areas along the Genkainada, but they have started to complain that they do not have enough people to handle the large amount of trash.

Currently, the beach-cleaning robot still requires additional work to move on rocky terrain. The researchers also want to cut manufacturing costs to make it more affordable when it becomes commercially available in the future.

But new measures will be needed to deal with the growing problem of microplastics, or pieces of plastic waste smaller than 5 mm in length. They result from plastic waste breaking down after many years drifting in the oceans. Scientists have expressed concern about their potential impact on fish and birds.

The concentration of microplastics in Japan's exclusive economic zone -- particularly the Sea of Japan -- is about 1.72 million particles per sq. km, according to Atsuhiko Isobe, a professor at Kyushu University. That is about 27 times the global average of roughly 63,000.

That figure could double by 2030 if it increases at the current pace, according to one estimate.

Global leaders at the Group of 20 summit last June set a goal of reducing additional contamination to zero by 2050.

"It's urgent that countries, including developing countries, create a system to reduce the amount of plastics used," Isobe said.