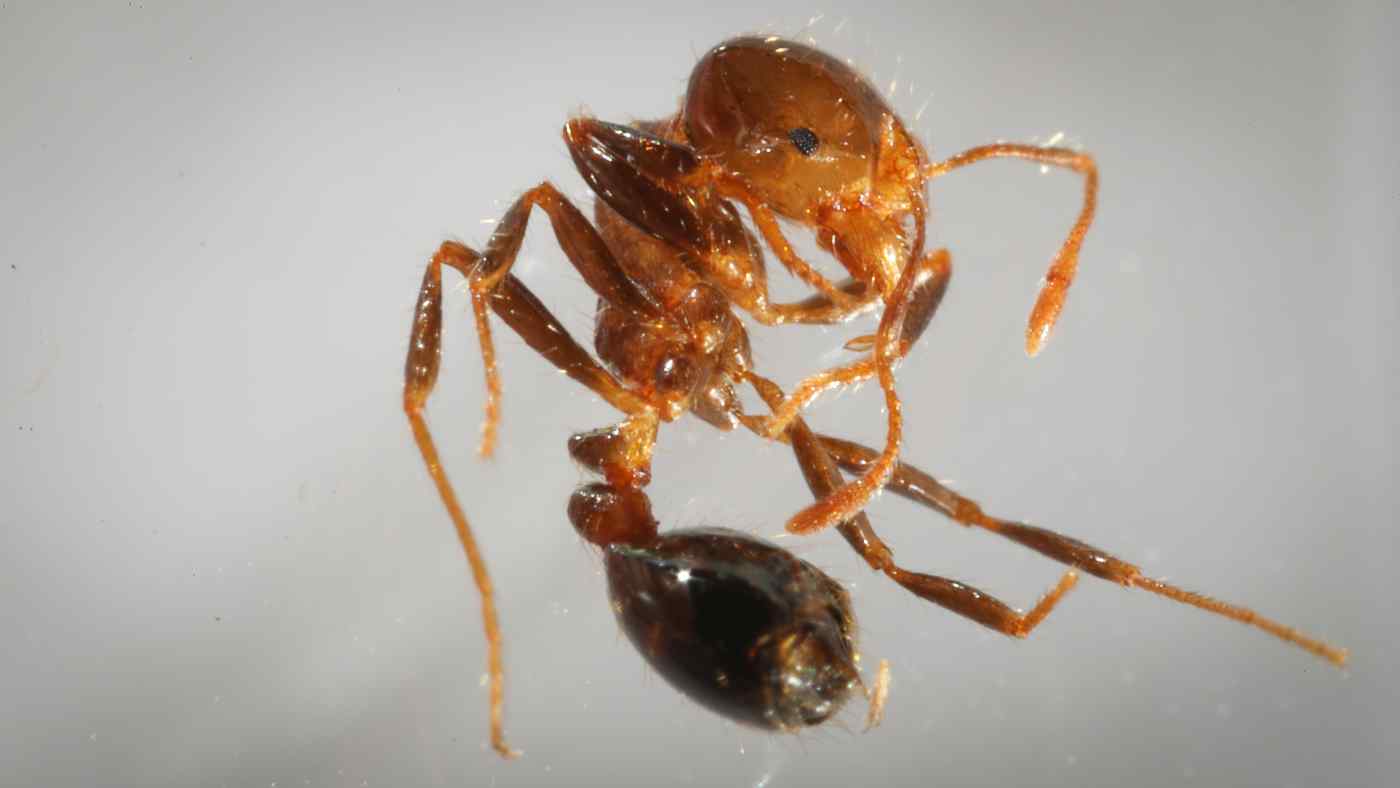 A fire ant is found in Hyogo Prefecture in August 2017. Japan is struggling to control the spread of the invasive species. (Photo by Kento Awashima)
CHUNI KIM, Nikkei staff writerDecember 15, 2019 15:50 JST | Japan
CopyCopied

TOKYO -- Venomous fire ants that hitched rides to Japan aboard container ships are surviving the winters and multiplying to such an extent that nursery school staff are being trained to spot the potentially deadly invaders.

In October, more than 50 queen ants were detected at a container terminal at the Port of Tokyo. The discovery of so many queens suggests anthills built in places away from the terminal.

The ants are one of many invasive species to arrive in Japan and cause environmental and economic damage. In the U.S. where fire ants have settled, treatment and countermeasures reportedly cost more than $5.47 billion a year. Invasive species are set to become a growing problem for many countries as the global economy become more connected.

The discovery in Tokyo prompted the central and Tokyo metropolitan governments to step up their inspections and extermination runs in the surrounding area.

"We're at the stage where we need to act as if there's a real risk of them spreading," said a local government worker.

At the end of last month, though, more than 500 fire ants were discovered at the port. 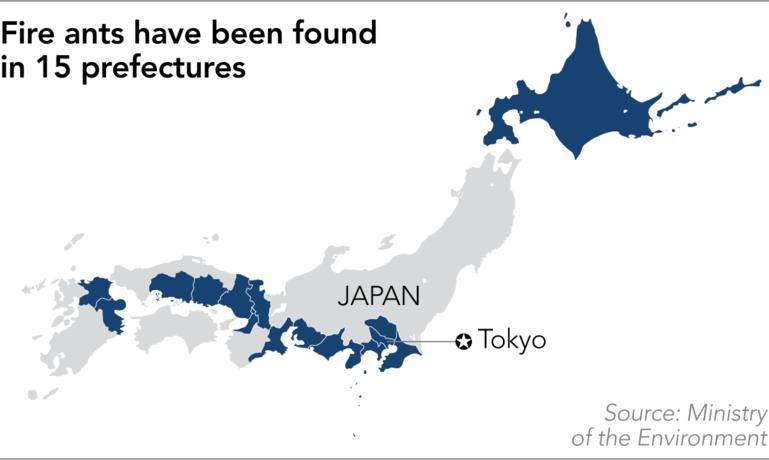 Fire ants, indigenous to South America, were first found in Japan in June 2017, and they have since spread to 15 prefectures.

Fire ants are not the only pest authorities are fighting. The Shimizu port authority is also at war with red ants, another invasive species. In September, it found more than 1,000 of the insects.

Foreign ants come to Japan from South, Central and North America. Their circuitous sea journeys first take them to China, where they are dropped ashore along with the shipping containers they colonize. There they multiply, but some transfer to ships bound for Japan and Southeast Asia.

With more ants arriving from overseas, authorities are stepping up their efforts to eradicate them. The Environment Ministry checks for fire ants twice a year at 65 ports across the country, with follow-up surveys conducted for a certain period once the insects are discovered.

The Shizuoka municipal government began looking for the pests in parks, along roads and in other public places around the port in fiscal 2018, and it plans to increase the number of inspection sites in fiscal 2020. In addition, local officials have provided kindergartens and nursery schools with a manual of how to recognize fire ants.

At a day care about a kilometer from the port, staff check the playground every morning and tell the children not to touch big ants.

"We're working to conduct thorough investigations and quickly find fire ants on the assumption that they will spread," a city official said.

Considering Japan's globalized economy, the war against stinging ants will be long term.

In early November, Masako Kamimura, assistant director at the Shimizu Port Authority, showed off a plastic bag containing what looked like sawdust; it was actually a pulverized cookie. "We asked an expert to choose a bait that invasive ants will like," she said.

Kamimura used the bait to prepare 30 traps, which she and the port director scattered around an empty container yard where red ants were discovered last September.

Fire ants measure about 2 millimeters to 6 mm long and are a reddish brown. If stung, people can develop strong allergic reactions and possibly die. Red ants, which measure 3 mm to 5 mm, are less venomous than fire ants. Victims experience severe itching around the sting.

Fire ants can survive winters in greater Tokyo and to the north, according to Toshio Kishimoto, professor at the Museum of Natural and Environmental History, Shizuoka.

"Survival through the winter leads to propagation," Kishimoto said, "so thorough monitoring and extermination are a must."