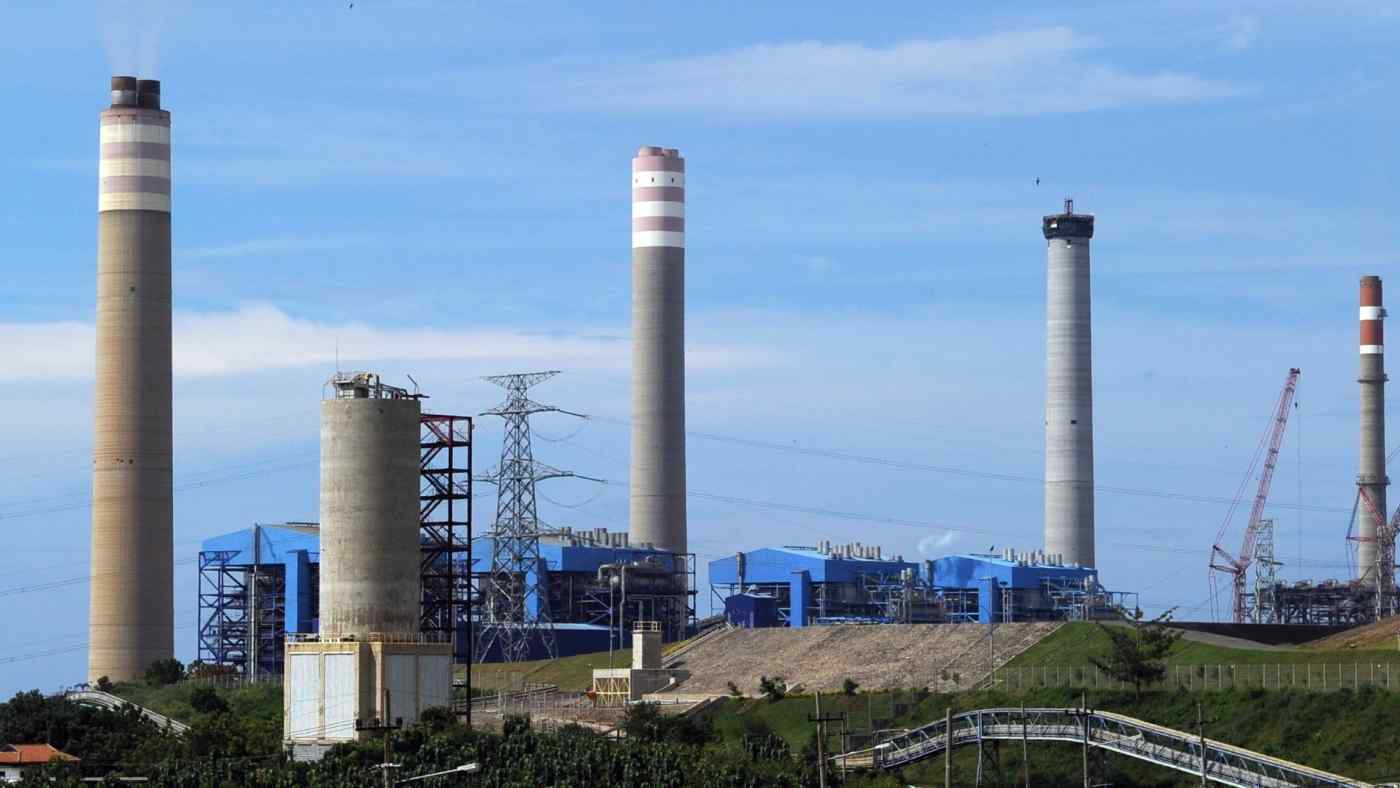 A coal-fired plant in Paiton, East Java, Indonesia. For more than a decade corporate Japan has been backing the government's diplomatic strategy in Southeast Asia by pitching in on power plants.
HIDEFUMI FUJIMOTO, Nikkei staff writerDecember 30, 2020 10:07 JST | Vietnam
CopyCopied

TOKYO -- A group of mostly European asset managers has pitted investors' heightening climate change concerns against the Japanese government's strategy to counter China in the expanding economies of Southeast Asia and in the critical shipping lanes of the South China Sea.

Caught in the kerfuffle are Japan's big trading houses and banks.

In October, Nordea Asset Management and its partners sent a letter to Japan's Mitsubishi Corp. and eleven other companies, urging them to withdraw from a coal-fired power plant project in Vietnam.

"We respectfully urge you to declare your decision not to be associated with or involved in Vung Ang 2, as we find the project to suffer from high climate-related, financial and reputational risks," the open letter says.

The Vung Ang 2 project, backed by the Vietnamese and Japanese governments, now finds itself torn between the market -- which is aggressively brandishing its environmental, social and governance, or ESG, concerns -- and government policy in Vietnam and Japan.

The group of institutional investors, including Nordea and Amundi, manages assets of 4.7 trillion euros ($5.71 trillion). With a minority stake in Mitsubishi Corp., it is having a significant impact on the stock market. The news, which came in late November, sent Mitsubishi shares down by nearly 2% the following trading day.

The Vung Ang 2 project, while supported by the Japanese government, at one point pitted ministries against one another. Eventually, the Ministry of Economy, Trade and Industry and the Ministry of the Environment agreed to tighten four requirements for the exports of coal-fired power plants.

Japanese trading houses, including Mitsubishi, have pushed forward coal-fired power plant projects in Southeast Asia, including Vietnam, Indonesia, the Philippines and Malaysia. But these companies have said that they will not build any new coal-fired plants amid mounting ESG pressure.

For its part, the Japanese government has pledged to reduce greenhouse-gas emissions to net-zero by 2050, a promise that investors and other stakeholders are using as an invitation to call for reforms to existing projects as well as to those in progress. Last year, Sumitomo Corp., another of Japan's big trading houses, started building the Van Phong 1 coal-fired plant, which will have an output of 1.32 million kW. The total cost is estimated at 280 billion yen ($2.7 billion). The company decided to go ahead with the project in 2009, but construction had been postponed due to prolonged talks with Vietnam.

The Van Phong 1 is a supercritical pressure power plant that will emit 5-10% more carbon dioxide than the Vung Ang 2 ultra-supercritical pressure plant. Sumitomo also operates the Tanjung Jati B coal-fired plant in Indonesia. While the company has said it will not build new coal-fired plants, a Sumitomo executive says the company will closely watch how investors and other stakeholders respond.

Vietnam's electricity demand has grown at more than 10% per year, surpassing the country's economic growth rate of 6-7%. Nuclear plants had been cited as a trump card for Vietnam's power shortage, and a group of Japanese and Russian companies had expressed support. But the Vietnamese government scrapped its reactor plans in 2016 due to $27 billion in reported construction costs, among other obstacles.

Coal-fired plants have attracted greater attention due to Vietnam's quality coal mines and the fact that initial costs are lower than those for nuclear plants or liquefied natural gas plants.

Support from Japan was a blessing for Vietnam after a shortage of funds "made it difficult for international investors to organize finance," an executive at a big Japanese trading house said. The support also allowed the Japanese government to mind its interests.

Vietnam shares its northern border with China and has a 3,260-km coastline that hugs the South China Sea before curling into the Gulf of Thailand. Due to its geography, it is feeling threatened by China's aggressive expansion into the South China Sea.

China's moves convinced Japanese Prime Minister Yoshihide Suga, who took office in September, to make his first official overseas trip to Vietnam. As a senior lawmaker from Suga's Liberal Democratic Party put it, the gesture was meant "to tighten bilateral relations with a focus on the economy and [provide a check to] China's growing influence in the South China Sea and elsewhere." 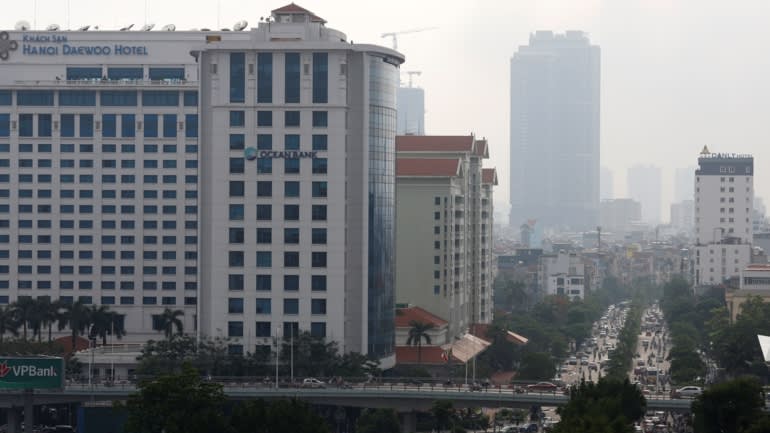 Vietnam's electricity demand has grown at more than 10% a year, surpassing the country's economic growth.   © Reuters

There was also a need to block China's attempts to take control of Vietnam's electricity infrastructure by building cheap coal-fired power plants.

As a diplomatic bargaining chip and to strengthen relations, Japan offered energy and electricity supplies to Vietnam. This was part of its strategy to counter China, and Japanese trading houses have played a key role. On the sidelines of Suga's visit to the country, Marubeni, Tokyo Gas and a Vietnamese company agreed to build an LNG power plant in Vietnam.

To counter China's expansion into the South China Sea and its Belt and Road Initiative, the Japanese government has been urging the big trading houses to export coal-fired power plant projects. It has also provided loans from the Japan Bank for International Cooperation and guarantees from Nippon Export and Investment Insurance.

Japanese trading houses have been on board with national policy for more than a decade, assuming financial risks, but are now under pressure from investors to withdraw from the projects.

In particular, Mitsubishi, whose resource and energy business greatly contributes to net profit, will be forced to make some hard choices. In the fiscal year through this past March, more than half of the group's net profit of 535.3 billion yen came from natural gas and mineral resource businesses. In the case of Itochu, which generates big profits from its life-related businesses including food and retail, the ratio of resources to net profit is 25%.

Mitsubishi has been under selling pressure as European and American institutional investors pull away, and the profitability of its resource and energy group has declined amid the global decarbonization trend. The company's market capitalization is smaller than that of Itochu, whose stock price is soaring to all-time highs.

Amid the hubbub, Mitsubishi is shifting its focus to renewable energy. In March it and Chubu Electric Power acquired Dutch energy company Eneco for 500 billion yen. It has also started production and shipments of hydrogen.

As Japanese trading houses have said they will not engage in any new coal-fired power plants, the Vung Ang 2 is expected to be the last such export by a Japanese company. But as global warming concerns grow, investors will likely cast a stern eye on overseas LNG power plant projects.