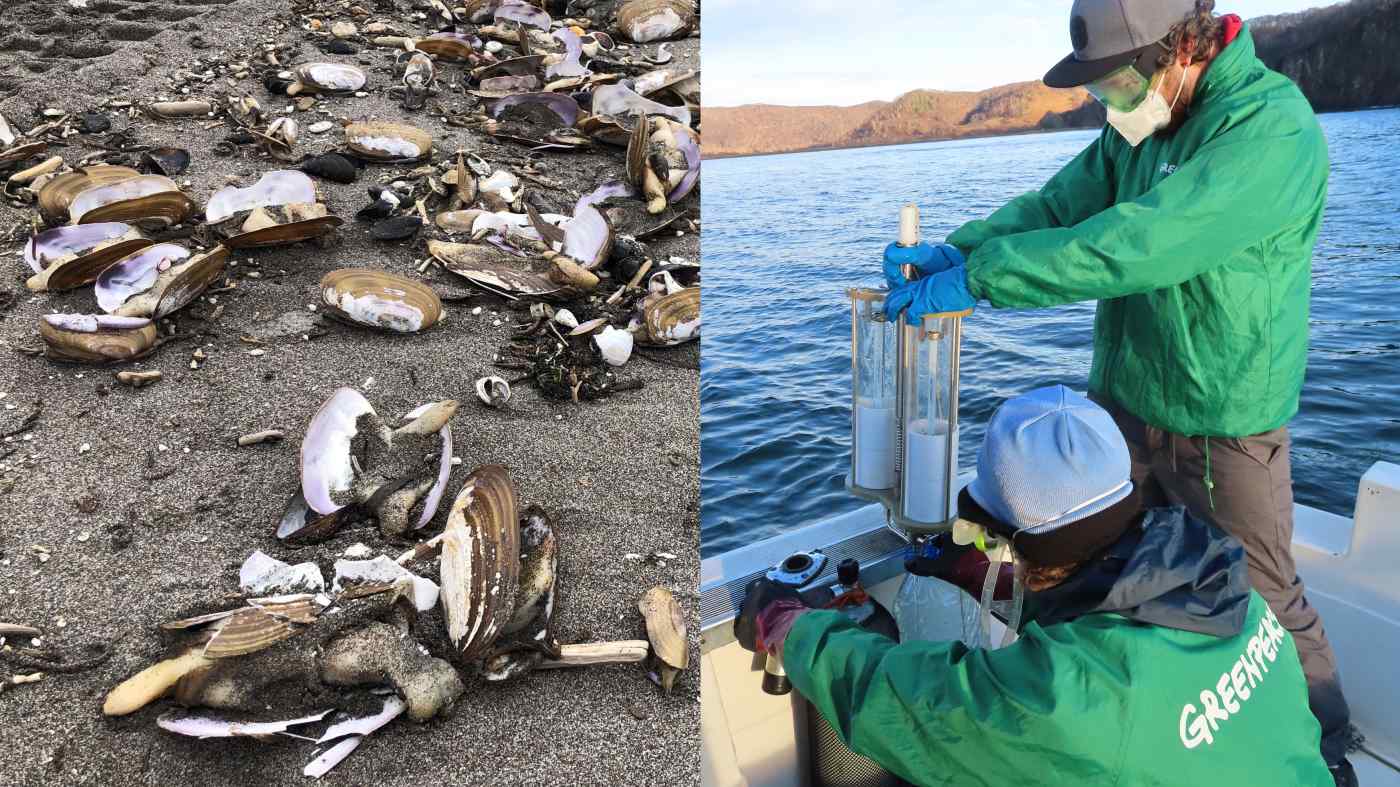 MOSCOW -- This autumn, the Kamchatka Peninsula in Russian Far East has experienced a massive death of marine life, the cause of which has yet to be identified, leaving environmentalists and local residents in shock.

While the government is pointing the finger at a red tide algae bloom, environmental groups and residents suspect that the real culprit is pollution caused by a leak of poisonous chemicals. The mounds of lifeless sea creatures washing up on Kamchatka's shores have made President Vladimir Putin's administration uneasy as environmental consciousness has been growing steadily in the country.

On Oct. 28, a boat chartered by environmental group Greenpeace set out from the port of Petropavlovsk-Kamchatsky, the largest city on the peninsula, to investigate the cause of the disaster.

Vasily Yablokov, Greenpeace Russia's climate project leader, released an underwater drone from the ship. As the drone sank about 15 meters to the bottom of the sea, Yablokov stared at the monitor showing images from the vehicle's camera. He was bewildered by the desolate underwater landscape on the display, which showed images of no marine life except for one crab. He said the area should be thriving with sea life.

During three hours of research in the bay, the crew collected water samples from the bottom of the sea, to be sent to an institution in Moscow that conducts water quality tests. A member of Greenpeace Russia releases a drone into the sea that will help researchers to examine the water quality of Avacha Bay, Kamchatka Peninsula, Oct. 28. (Photo by Yohei Ishikawa)

In September, images of dead starfish, sea urchins, crabs and octopuses found on Kamchatka beaches began to spread on social media. The locations of the discoveries were scattered over several hundreds of kilometers along the coast of the peninsula. In some areas, an odorous current with yellowish foam was also observed.

Local surfers were the first to note something was wrong in the sea. Anton Morozov, who runs a surf school on the Pacific coast facing Avacha Bay, recalls how his instructors and students started complaining of pain in their eyes and throats after surfing in the sea. They also had fever and symptoms like food poisoning. As discoveries of marine life death continued, Morozov decided to close his school for the season at the end of September, one month earlier than usual. 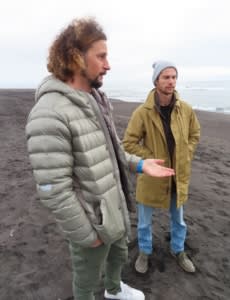 Anton Morozov, left, who runs a surf school on the Pacific coast facing Avacha Bay, talks to Nikkei, on the beach on the Kamchatka Penisula, Oct. 30. (Photo by Yohei Ishikawa)

The local government, environmental groups and local residents started their own water quality research. Raised levels of phosphates and phenol were detected in some areas, but the cause was not identified.

All kinds of theories have been put forward by experts and local residents. Some have suggested that a pollutant has been leaked from a facility that stores poisonous chemicals, while others have called the die-off an omen of a major earthquake. Some suspected leaks of hazardous materials from abandoned submarines and vessels.

A report written by the Russian Federal Research Institute of Fisheries and Oceanography said the environmental conditions were normal, offering little insight into the mystery. The report cited a "natural phenomenon" as a likely cause of the disaster.

But what sort of phenomenon could cause this?

Aleksei Kumarkov, the official at the Kamchatka local government in charge of natural resources and ecology, pointed out the possibility of a red tide. He said there had been reports that the seawater temperatures in the Avacha Bay had been three to four degrees higher than usual, possibly causing a red tide algae bloom. Kumarkov suggested that global warming may have caused this.

But many local residents and environmental activities have voiced skepticism. A local scuba diver who was one of the first to discover the issue said the color of the sea was yellowish, rather than red. Greenpeace's Yablokov says substances have been found that indicate a possible missile fuel leak. It is unknown what kind of military facilities are hidden in the area, he says.

On Oct. 26, Natural Resources and Ecology Minister Dmitry Kobylkin criticized the media for fanning public anxiety. Major Russian TV stations and newspapers have been offering a steady stream of reports, drawing public attention to the incident. The irritated comments of the minister apparently reflect the Russian government's concerns about growing public discontent. On Nov. 9, Kobylkin was dismissed from his post in a cabinet reshuffle.

Russia has been struggling to deal with environmental problems in recent years.

In May, a huge oil spill from a storage tank near the city of Norilsk in Siberia released 20,000 tons of diesel into rivers and subsoil. In late October, a Russian oil tanker exploded in the Sea of Azov. In the surrounding areas of Moscow, there have been frequent environmental protests about how to deal with the city's waste.

These problems are fueling public distrust, with leaders in Moscow fearful that this could lead to louder public criticism against the government and easily turn into pro-democracy protests. On Sept. 23, President Vladimir Putin pledged to increase the budget for tackling environmental problems, committing his administration to spend 1 trillion rubles ($13 billion) on ecology-related national projects over three years.

Russia has learned some harsh and costly lessons from the Chernobyl nuclear disaster in 1986. Delays in the Soviet government's response caused enormous casualties as well as devastating damage to the eco-system.

The catastrophe triggered a pro-democracy movement demanding information disclosure, creating one of the reasons for the collapse of the Soviet Union. The Kamchatka ecological disaster may have awakened bitter memories in Putin's mind.