Nitesh Sharma, co-founder of Dhaasoo, at his office that doubles as a workshop in Kathmandu. (Photo by Deepak Adhikari)

KATHMANDU -- Like many creative business ideas, it emerged over a bottle of beer.

One summer evening in 2015, Nitesh Sharma was discussing business ideas with his father and uncle at a family gathering in Kathmandu. Staring at the bottle of beer, Sharma wondered if he could turn it into a useful -- artistic even -- item instead of passing it on to the kawadiwalas, people who go door-to-door to collect waste materials such as bottles, newspapers, magazines and books.

Sharma, who had already tried his hand at several jobs in the hospitality and e-commerce sectors in India and Nepal, found an empty bottle of Jack Daniel's, a top-selling American whiskey. He turned it into an electric lamp. Though his mother wasn't impressed with his debut product, the 29-year-old sold it for 1,200 Nepalese rupees ($10).

At his office that doubles as a workshop, Sharma is surrounded by items that were once discarded but which he gave a new lease on life -- a speaker made from a tire; lamps made from whiskey bottles; a table made from items as varied as shards of discarded glass and a car's wheel.

Sharma named his company Dhaasoo, from a Bollywood expression meaning awesome in Hindi. The company has produced more than 500 items from found objects. It's among a growing number of Nepali startups that are turning trash into stylish products. "If you go to a junkyard, you will find a whole lot of things that people throw away. We collect both broken parts and whole things, whatever shape they're in," he said. He once even found an iPad that was still working. "Our goal is to prolong the life of things that people consider no longer useful." 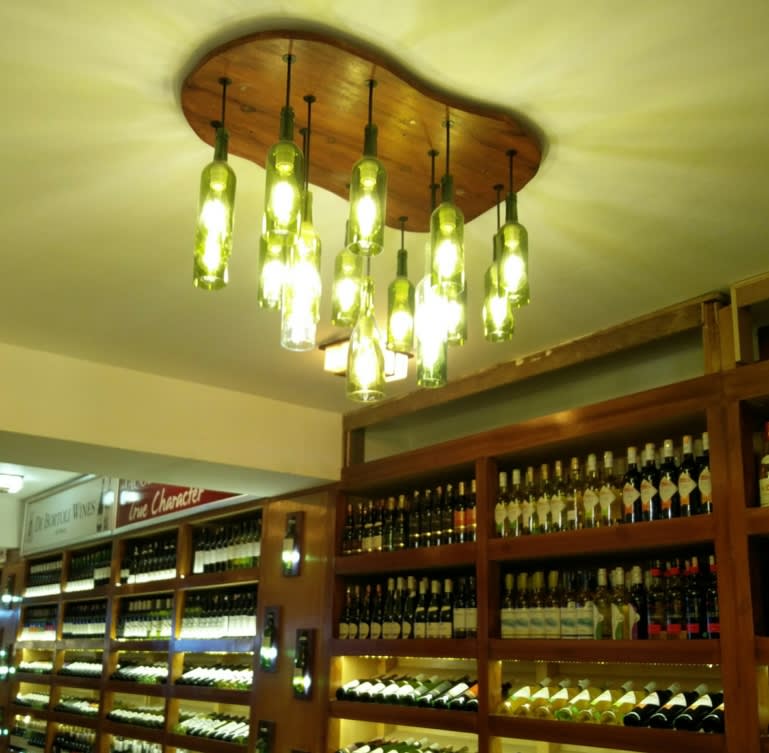 Waste management is a major problem in the Kathmandu Valley, the tri-city home to an estimated 3 million people, who generate about 1,000 tons of solid waste every day. The city's only landfill on its outskirts is already full to bursting, and officials are scrambling to find an alternative. Kathmandu's streets are often littered with uncollected trash, risking disease and spreading pollution.

The idea of recycling, already a well-established industry in the developed world, has yet to take root in Nepal, said Sumitra Amatya, former head of the Solid Waste Management Technical Support Center, a state agency. "We have been taught to deposit waste at a landfill site. I don't even call it landfill -- it's just controlled dumping," she said. "The municipalities collect household waste and dump it there, but it must be segregated, recycled and reused before disposal." Startups such as Dhaasoo have demonstrated the potential, but the government needed to promote it to create a momentum, she said.

When Ojaswi Baidya, 27, and Loonibha Manandhar, 22, hit upon the idea of turning used tires into useful products, they had been participating in a 10-day camp seeking green solutions. "We discovered that brick factories use the tires to fire their kilns, which in turn contributes to the city's worsening air pollution. Political party cadres also burn tires during general strikes," Baidya said. 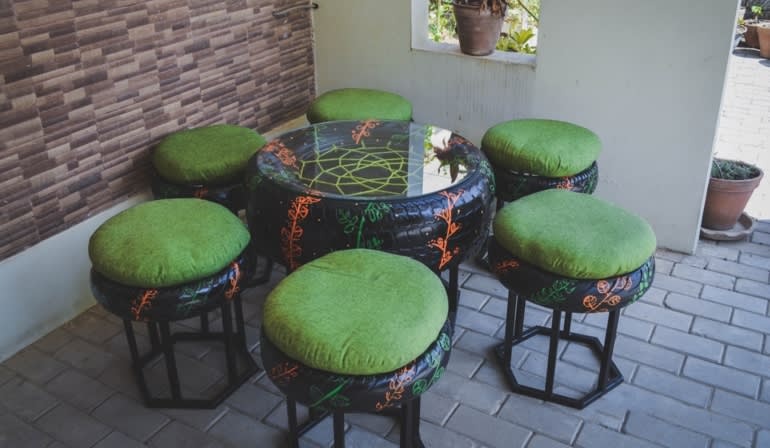 Nepal has no designated areas to dispose of used glass, paper and tires. Scrap traders export them to India, but in recent years, Indian authorities have introduced strict rules, which discourage imports of discarded tires. With a 150,000-Nepalese-rupee fund from the event's organizers, Baidya and Manandhar launched Tyre Treasures and started working on their initiative.

They learned that discarded tires are plentiful in Kathmandu. With the help of local artisans, who wove fiber ropes into the tires, they created their Full Circle Table. They sold their first product for 13,500 rupees.

Today, Tyre Treasures directly employs five workers, as well as outsourcing to about 25 weavers and metal and wood craftsmen. It produces 10 types of furniture, including garden chairs, flower pots, beds for pets, and stools. Baidya recently attended training sessions for young South Asian entrepreneurs in New Delhi, organized by the American Center and the University of Texas at Austin. "We have learned a lot in the last year. We have learned lessons from what worked and what didn't. In the beginning, it was all trial and error," Baidya said. 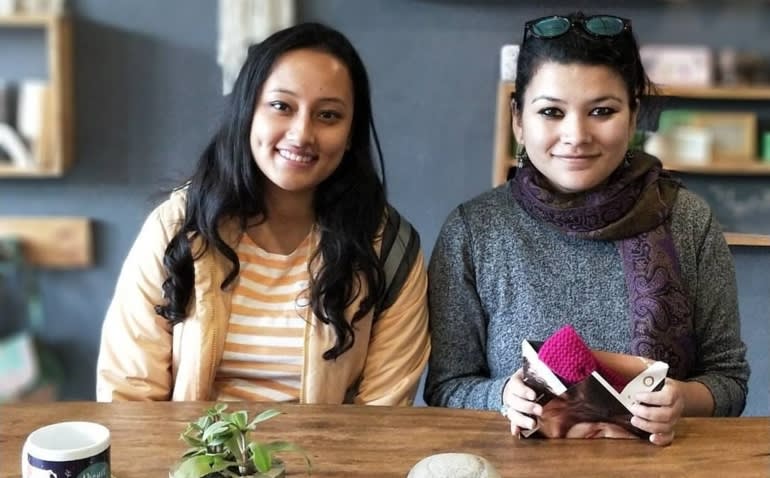 Jamarko, a company that makes and sells recycled paper products, has been working in Nepal's recycling scene for over 15 years. Founded by two sisters in 2001, Jamarko, which means "effort" in the Nepali language, collects waste paper and turns it into paper bags, photo frames, notebooks, greeting cards and lamp shades.

Frustrated by mere sloganeering by nonprofit groups vowing to protect the environment, Aruna Lacoul and her sister Muna Shrestha decided to take matters into their own hands in 2001. The duo wanted to demonstrate that waste paper -- such as magazines, file folders, envelopes and gift boxes -- could not only be reused, but actually transformed into beautiful handmade products. They provided collection bins to government and nongovernment offices, but they quickly realized that transporting and sorting the paper would add to their cost. They collected waste paper from households close to their collection center.

Shrestha, a co-founder and social worker, noted that "30% of paper needs in developing countries can be met with recycled paper." 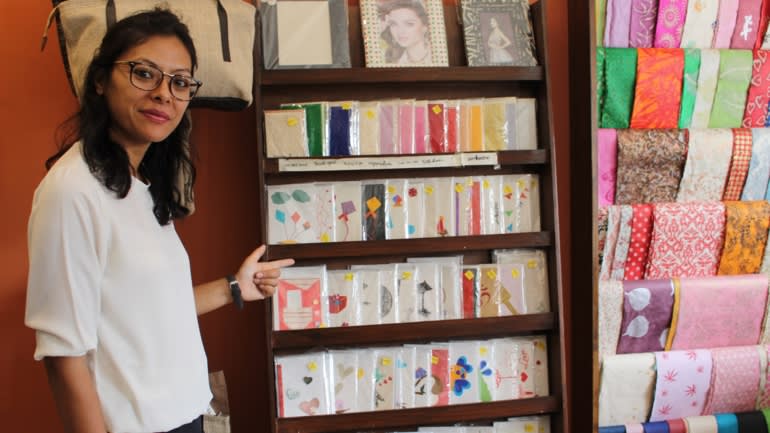 Kritica Lacoul, who runs Jamarko, a paper recycling company,points to handmade recycled greeting cards at her showroom in Kathmandu. (Photo by Deepak Adhikari)

The company has also gone through a generational shift, with Kritica Lacoul, a 34-year-old graduate in business administration, taking over the operations. She said she joined the company to continue the family's legacy. "But I was also motivated by the fact that it's an environment-friendly enterprise," she said.

At their small showroom in the posh neighborhood of Jhamsikhel, recycled notebooks, file folders and envelopes are arranged in rows. An occasional tourist drops in, but most of the customers are locals. Jamarko, which also produces products from handmade Nepalese Lokta paper, employs 10 people, mostly women trained by the company, who work at a factory on the city's eastern outskirts. "Over the years, people have become aware of the need to manage waste, but they don't know how to sort it," Kritica Lacoul said. "We had expected government offices and NGOs to provide us with raw materials and buy recycled products in return, but it didn't happen."

Amatya, the waste management expert, said big companies must take steps to reuse plastics and other materials in their consumer products. "Small ventures are doing their bit, but big companies must lead the recycling campaign if they want to contribute to society," she said.