SINGAPORE -- Hotels, stores and shopping malls in Singapore, looking for a way to cut their air conditioning bills and spruce up their environmental image, are increasingly adding greenery to their exterior walls.

The 27-story Oasia Hotel Downtown in the Tanjong Pagar business district, whose outer mesh cladding is swathed in trailing green plants, stands out among its high-rise neighbors. The Parkroyal on Pickering, a hotel in nearby Chinatown, has layers of balcony gardens.

The greening is one part environmental conservation and one part bottom line: Green walls help reduce the cost of cooling a building by reducing the temperature of exterior walls and mitigating the heat-island effect -- the higher temperatures found in heavily built-up areas.

And it is not just hotels that are seeing green. One condominium complex developed by property heavyweight City Developments was previously cited by Guinness World Records as having the world's biggest green wall. Similar structures are being put in at office buildings, airports, shopping malls and hospitals.

"When we started designing buildings that have a substantial green plot ratio [the ratio of green space to total site area], we had to work harder to persuade clients to agree to the initial investment and running costs, because greenery does require maintenance and it is a long-term investment," said Richard Hassell, co-founder of Singapore-based architectural firm WOHA.

"But with time, we have showed that it is a worthwhile investment that adds value to the property. And we try to make maintenance as easy, accessible and cost-efficient as possible so that it doesn't require much effort to keep the greenery alive and beautiful," Hassell said. 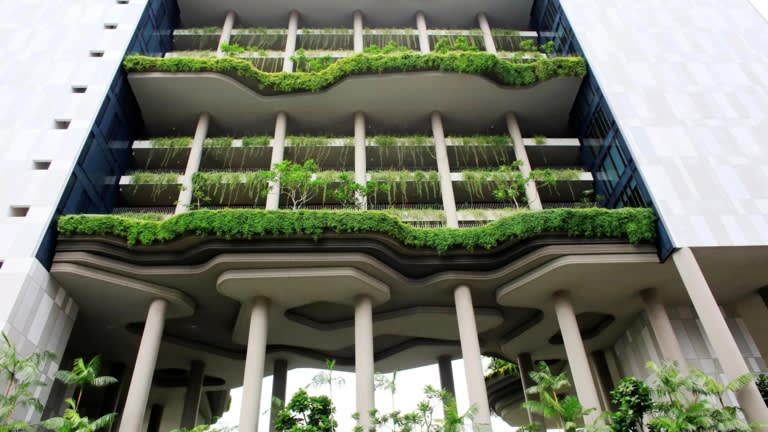 "Incorporating greenery into building design is less 'radical' and difficult nowadays, and the Singapore government has created a framework called LUSH [Landscaping for Urban Spaces and High-rises], which encourages developers and architects to add greenery into their designs," he said. "Clients like it because it gives their building a unique, living, design feature, which can also have a positive environmental impact and create a sense of well-being."

Government policy has contributed to the green wall boom. Lee Kuan Yew, Singapore's first prime minister, stressed that turning the city-state into a garden city would give it a competitive advantage over other regional hubs after its independence in 1965, citing Hong Kong's uncontrolled development as a negative example.

In addition to planting trees on expressways and factory grounds, the government has also focused on greening high-rise buildings since 2009. Up to half the cost of green walls and rooftop gardens is paid for by the government.

Authorities hope the green walls will help combat global warming. Singapore aims to reduce its greenhouse gas emissions per unit of gross domestic product by 36% by 2030, versus 2005. To this end, many builders work to get their structures certified eco-friendly under the government's Green Mark program.

By 2030, 80% of the buildings in Singapore will be Green Mark-certified, up from 20% in 2013, according to a forecast by the Building and Construction Authority.

Landscape consultancy Vertical Green is cashing in on Singapore's botanical boom. Green wall panels made of lightweight materials developed by the company are said to be the thinnest in the industry. Vertical Green has delivered panels to a bank, a hospital and a cosmetics shop, among others. It also operates in Shanghai, Kuala Lumpur, Manila and Jakarta.

The Jewel Changi Airport complex that opened on April 17 has called on tenants to put more plants in their shops. Vertical Green has benefited, receiving orders for green walls from Starbucks Coffee and others.

"With technology, it is getting easier and cheaper to maintain" such walls, said Vertical Green founder and CEO Darren Neo, predicting that demand for the structures will rise.