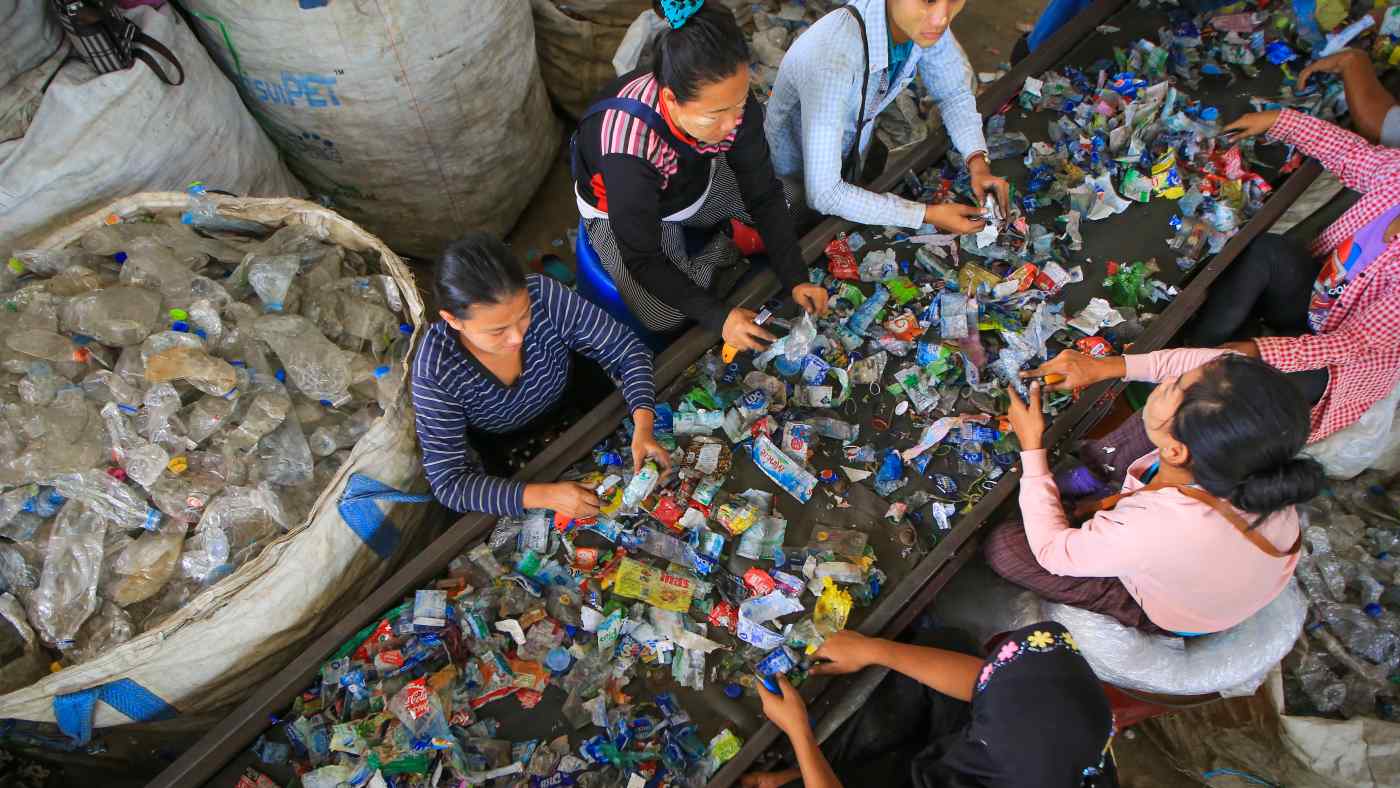 SINGAPORE -- Public anger over the environmental damage caused by plastic waste is finally forcing consumer goods companies to take action, according to Rob Kaplan, whose Singapore-based Circulate Capital Ocean Fund has raised $106 million to invest in solutions to the issue.

Around 8 million tonnes of plastic enters the world's oceans every year, 60% of which comes from Asia, where rapid economic growth and consumption has outpaced countries' capacity to collect and manage waste.

While the problem of waste leaking out into the world's rivers and oceans is not new, a surge of news stories and disturbing images of marine creatures killed or maimed by plastic, amplified by social media, has begun to influence consumer behavior, Kaplan told Nikkei Asian Review.

"There's one thing that's true about environmental issues is that people don't really care until animals are involved . . . there's a lot of emotional imagery involved in this topic," he says. "I've worked in the space for 10-15 years, and I've never seen a shift like this happen in such a short period of time."

Kaplan, the former head of sustainability at Walmart in the U.S., relocated to Asia earlier this year to raise the fund, whose investors include Coca-Cola, Dow Chemicals, PepsiCo, Danone, Unilever, Procter & Gamble and Chevron Phillips Chemical.

Circulate Capital will make debt and equity investments of $2-10 million into startups and established businesses across the entire plastics value chain, from innovations in material through to advanced recycling technology.

The fund is in final due diligence on three deals, and expects to announce its first investment in early 2020. It will initially focus on Indonesia and India, but will also consider deals across South and Southeast Asia.

Kaplan says that while there are some compelling opportunities in technology, including bio-plastics and digital supply chain management, the fund's greatest impact in the short term will come from making investments in more mundane aspects of waste management.

"There are lots of sexy things out there, like alternative materials . . . but really what we're talking about is 8 million tonnes of plastic getting into the ocean because it's not being collected or managed properly," he says. "We can cut that in half by investing in those fundamentals of collection, sorting and processing."

That business is in the midst of a major disruption in Asia. For the last decade, China has been the recipient of nearly half of all the world's plastic waste, but in 2018 the country abruptly banned all imports, driving a sudden reshuffling of the $200 billion recycling industry.

Plastic shipments were directed to Southeast Asian countries -- imports tripled across the Association of Southeast Asian Nations in 2018 -- who were themselves forced to take measures to stop the waste from overwhelming their storage and processing facilities. Rob Kaplan, the former head of sustainability at Walmart in the U.S., says one of the most significant challenges for the recycling industry is that virgin plastic is still cheaper than recycled plastic.

"One of the implications of that banning of imports is that it drove the need for domestic processing," Kaplan says. "I think China did the world a favor. It's driven that mindset of: hey, shipping me your trash isn't a good idea anymore. And it's driven this huge opportunity for us as investors . . . to capitalize these companies domestically."

One of the most significant challenges for the recycling industry is that virgin plastic is still cheaper than recycled, as low oil prices push down the cost of production.

That means that Kaplan is betting on companies -- including those that have invested in the fund -- following through on their public commitments to change their behavior, even if it means investing contrary to their immediate economic incentives.

"All of our investors invested in us not to make a financial return. This is not how Danone and PepsiCo make money. What they're interested in is getting access to this recycled material for their value chains."

In an email to Nikkei Asian Review, Matt Echols, head of sustainability for Coca Cola Asia Pacific, said the company wants to move towards a "circular economy" model, which minimizes waste and maximizes the reuse of materials.

"The beverage sector needs to continue offering consumers a choice of recyclable packaging formats and make it easy and convenient for consumers to be part of a circular economy," Echols said. "With the help of Circulate Capital we can accelerate our move toward a circular economy and this will ultimately reduce the amount of virgin materials needed in the sector."

Over the past year, a number of large consumer goods and industrial companies have signed up to ambitious pledges to reduce their own plastic use, and to develop alternative packaging.

In January, 28 companies, including Sumitomo Chemicals, Mitsubishi Chemical Holdings, Mitsui Chemicals and ExxonMobil, agreed to spend a combined $1.5 billion on tackling plastic waste. In October, Unilever announced that it would cut its plastic use in half by 2025.

These have been met with considerable scepticism by environmental groups, but analysts say that they may represent a genuine desire to clean up supply chains.

"There is the start of a real shift," says Frederic Dalsace, professor of marketing and strategy at IMD Business School, and an expert in sustainability. Dalsace believes that many companies have evolved beyond "greenwashing" of their business; companies that fail to live up to their promises to change will be punished.

"They don't know how to achieve it, but they have said that they are going to achieve these goals," Dalsace says. "Once you have said you are going to do it, you have to do it. It's the way Cortes apparently burned his ships when he arrived in South America."