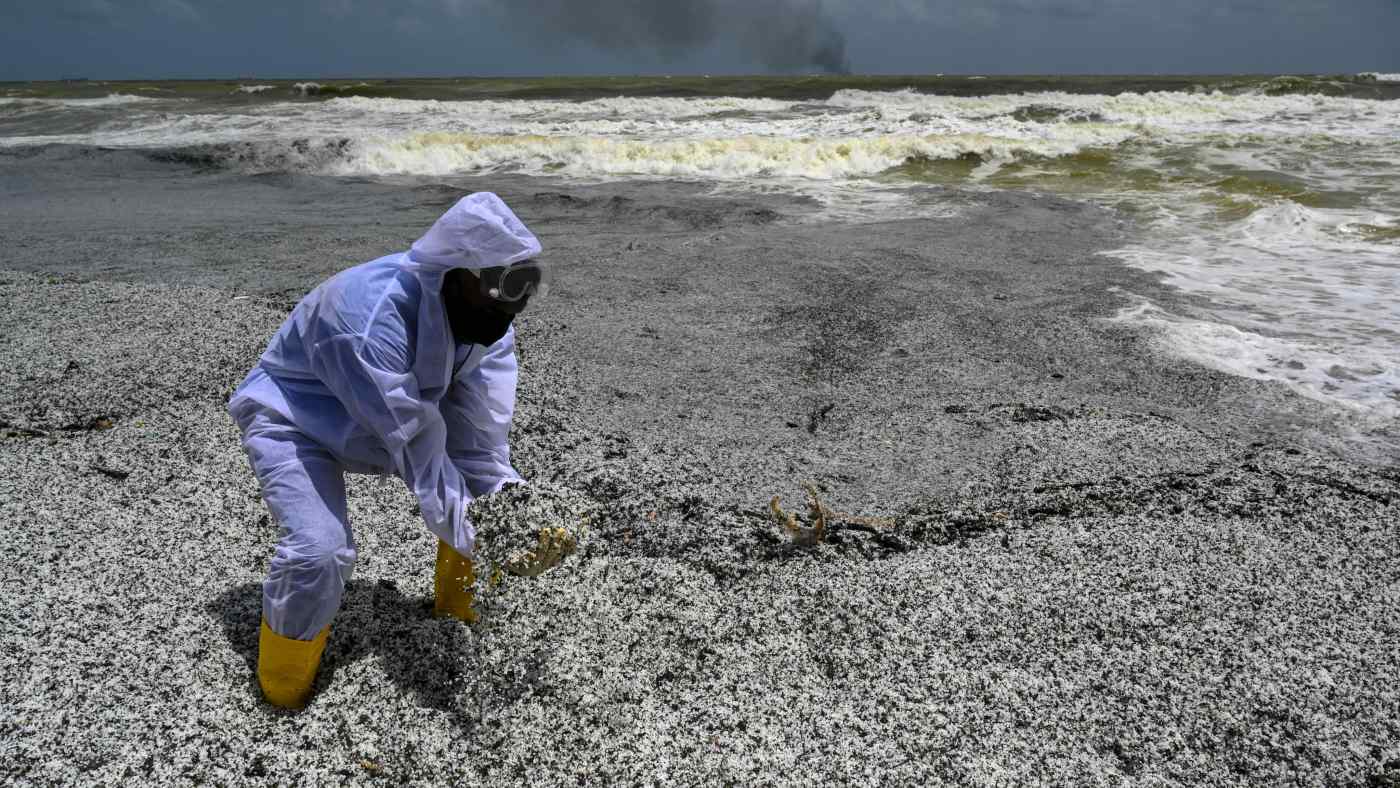 A member of Sri Lanka's military tries to clear Sarakkuwa Beach, north of Colombo, of pellets from a plastic and chemical spill that has delivered another blow to the country's pandemic-ravaged economy. (Photo by Ishara S. Kodikara)
MUNZA MUSHTAQ, Contributing WriterJune 12, 2021 13:11 JST | Sri Lanka
CopyCopied

COLOMBO -- Sri Lanka's west coast fishermen and women, who have been battered by the pandemic and lockdowns for more than a year now, can no longer look forward to the bountiful catches that the annual rainy season promises. Their customers, said Aruna Roshantha, president of the All Ceylon Fisher Folk Trade Union, are too scared to eat seafood.

The fear stems from a catastrophe that began to unfold on May 20, when a ship laden with 1,486 containers and 25 tons of nitric acid caught fire some 18 km northwest of Colombo. The Singapore-registered MV X-Press Pearl was also carrying other hazardous chemicals and materials, including nurdles, preproduction pellets used to make plastic products.

Now dead fish, sea turtles and dolphins are washing ashore, and grizzly photographs are making the rounds on social media.

People "are scared," Roshantha said. "So even if we catch fish, "there is no one to buy fish."

Tourist spots and Sri Lanka's exporters -- two other sectors that have taken severe blows from the pandemic -- are also feeling the repercussions. The area is a popular destination among local and foreign tourists who travel there to indulge in fresh jumbo prawns, crab, lobster, tuna and seer. Singaporeans might also be affected as Sri Lankan seafood stars in the city's famous chilly crab dish.

Roshantha said the disaster could not have come at a worse time -- at the beginning of the rainy season, which creates conditions that allow fishermen and women to bring in bigger hauls. "During this particular period," he said, "fishermen can earn anything between 5,000 rupees and 100,000 rupees ($25 to $500) a day."

As compensation, Roshantha went on, "the government is offering us 5,000 rupees a month, which is an insult to us. We want something that's justifiable from the government."

More than 10,000 fishermen and women from Colombo to Negombo, which lies to the north of the capital, have lost their incomes due to the spill. Others, Roshantha said, have been compelled to sell a kilo of fish at around 200 Sri Lankan rupees ($1), down from around 650 rupees before the disaster. 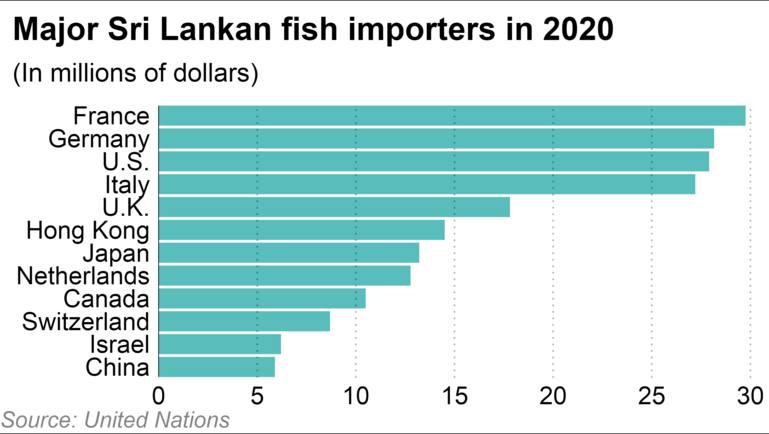 Niroshan Selvarajah, who runs JJ Fresh Maalu, a fish stall, said there is little demand for fish and sales have plunged by about 45%. "No one wants to buy," he said. "They are scared."

Dilan Fernando, president of the Seafood Exporters Association of Sri Lanka, said some shipments have been canceled since the catastrophe, though a portion of these buyers withdrew their cancellations after being assured of safety.

Several other buyers from Europe and Israel have informed Sri Lankan companies not to export seafood until the government provides the required safety clearance.

According to Fernando, pre-COVID seafood exports contributed an annual $350 million or so to the economy. In 2020, the figure slipped to $300 million. "The government must immediately step up and issue a statement saying the fish is safe for consumption," he said. "But for that to happen they have to first carry out the necessary testing."

The fisheries industry last year produced 429,150 tons of fish, down from 506,070 tons in pre-pandemic 2019, according to the National Aquaculture Development Authority. It contributes around 2.7% to the country's GDP, providing direct and indirect employment to over 500,000 people.

The catastrophe is also expected to impact tourism. West coast hoteliers are concerned that it will prevent them from riding a post-COVID recovery when more tourists are allowed back into the country. Kimberley Adams, director of Camelot Beach Hotel Negombo, said the pellet and chemical spill will negatively impact Negombo Beach.

"I look at the beach almost every other day," she said, "and there are heaps of those plastic pellets and clumps of burnt pellets strewn all over. The very first day it happened, the beach was pretty much a white beach" due to all the plastic. Negombo Beach is known for its amber sand.

Adams believes the impact on Sri Lanka's west coast hotels will mainly come from a hesitation among international travelers. "I think the locals will be more understanding of the situation," she said, adding that "international travelers ... specifically come for our beaches, and the last thing they will want to see is a beach filled with plastic."

From January to May this year, Sri Lanka welcomed a mere 15,000 or so arrivals.

Sanath Ukwatte, president of the Tourist Hotels Association of Sri Lanka, is not ready to sound the alarm. He noted that other destinations have emerged from similar disasters, pointing out the turquoise waters of the Indian Ocean island nation of Mauritius last August were victimized by an oil spill.

"Of course they had a temporary setback," he said, "but it was cleaned up. Even here, the armed forces are doing a brilliant job in clearing the beaches. I am certain that when it's peak season again, it will be back to normal."

Sailors and other troops began the cleanup mission on May 27.

Others impacted by the spill are not as sanguine. Last week, angry environmentalists and fishermen went to the Supreme Court to file a case against the government and shipping company for failing to prevent what they say is the "worst marine disaster" ever in Sri Lanka.

Petitioners are also demanding to know who gave clearance for the vessel to enter Sri Lankan waters amid reports that Qatar and India had refused the ship after learning of a chemical leak. They are demanding an order directing the attorney general to prosecute all state officials who have willfully failed to perform their statutory and regulatory duties; 13 have been cited as respondents, including Ports and Shipping Minister Rohitha Abeygunawardena, State Minister Nalaka Godahewa and Environment Minister Mahinda Amaraweera.

In addition, they want compensation from the ship's owner and its local agents for the environmental damage to the marine and coastal ecosystems as well as compensation for fishermen who have lost their livelihoods due to the disaster.

Roshantha says that when the government receives compensation from the shipping company, two-thirds must be distributed to the fishing community affected by the catastrophe.