Indorama has been aggressively acquiring companies that recycle polyethylene terephthalate, a material used in plastic bottles, in recent years. It aims to expand its recycling capacity to 750,000 tons a year by 2025 from the current roughly 250,000 tons.

The goal is to have "recycled materials account for about 20% of the 4 million tons of PET Indorama supplies to the beverage industry a year," Chief Sustainability Officer Yashovardhan Lohia told Nikkei Asia in a recent interview.

One in five PET bottles in the world is said to be made of Indorama's materials. The company's rapid ascent to the world's top PET manufacturer was achieved through a series of acquisitions.

Indorama started out as a yarn factory that the father of CEO Aloke Lohia formed in Indonesia. As part of diversification efforts, the company began the PET business in 1995. None of Indorama's operations were big income generators at the time, but the company bet that PET would be the hottest field and began devoting resources to scale it up.

PET is a generic product and the field is virtually open for anyone to enter. Although per-unit output does not yield a big margin, many a little makes a mickle, said the chief executive.

Back then, major PET producers were from Japan, Taiwan and South Korea. Now the family-run empire operates 121 factories across 33 countries. It has gained an edge in negotiating prices with beverage giants.

"The company's basic policy is to acquire facilities that already have established used bottle collection routes," said Yashovardhan Lohia, a son of the CEO. 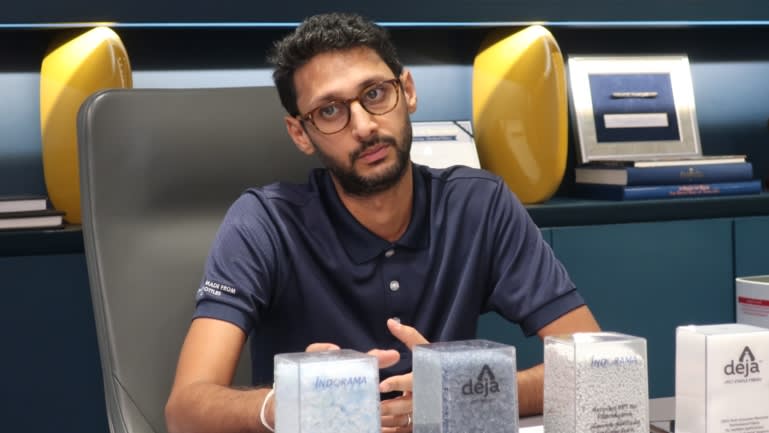 Indorama has been purchasing recycling facilities for the past 10 years or so, including at least five PET recyclers in the U.S., France, Brazil and Poland.

In some cases, using recycled materials requires technology for making clear bottles. Indorama has help from Japan's Toyobo, which has provided aluminum catalyst technology under a licensing agreement signed in 2017.

Bottles using PET made with this technology are easier to recycle and are more environmentally friendly. The deal is also a win-win for Toyobo since Indorama's global operations are expected to lower the cost of special processing required.

With weak international prices of PET, which generates about 70% of Indorama's group sales, the company's net profit for 2019 tumbled 80% on the year to 5.2 billion baht ($172 million). Recycled PET is more expensive, but Indorama believes the global trend of reducing plastic will give it a tailwind.

In areas with low recycling rates, Indorama will consider starting from square one and build facilities, the sustainability chief said.

One such plan is a project in the Philippines, where Indorama is forming a joint venture with Coca-Cola Beverages Philippines to complete a bottle recycling plant in 2021. It will mark that country's largest such facility with an annual capacity of 30,000 tons.

One challenge in Southeast Asia is thorough practice of sorting and collection, and Indorama is addressing this issue with community educational programs. In Thailand, the company operates initiatives providing children with school supplies and scholarships in exchange for bottles they have collected.