Coastal plastic: Vietnam is among the top five countries that send litter to sea, along with China, Indonesia, the Philippines and Thailand, according to Ocean Conservancy, a nonprofit based in Washington. (Source photos by Reuters)
LIEN HOANG, Nikkei staff writerApril 15, 2021 14:55 JST | Vietnam
CopyCopied

HO CHI MINH CITY -- It was just a reusable bag, and few people would have been as excited as Barak Ekshtein when he saw it produced at a Vietnam factory for a French grocer. The eco-entrepreneur was drawn by its blue-and-orange seascape design and a message that it was made from recovered marine plastic.

He later discovered that not all the material came from recycled sources, but the bag made him curious about marine plastic, finally leading to the question: What if businesses paid to offset their plastic waste, as they do for carbon pollution?

To answer the question, he started the company Tontoton in 2019. Businesses pay a fee for every ton of plastic that they generate. Tontoton then uses the money to employ scavengers, who retrieve an equal weight of plastic garbage in Vietnam -- the world's No. 4 source of ocean debris and co-host of United Nations talks to strike a global treaty on plastic.

Akin to carbon credit schemes, the plastic credits plunged Tontoton into a global debate about the mounting pollution that has beset the planet. Does plastic recycling work? How much can be replaced with compostable materials? Will societies sacrifice, if these fixes aren't enough, by simply consuming less?

As plastic is found in more and more places -- from a mother's womb to a floating trash heap as big as Mongolia -- companies have started to take an interest in ways to offset plastic waste, driven by duty or public pressure, or both. 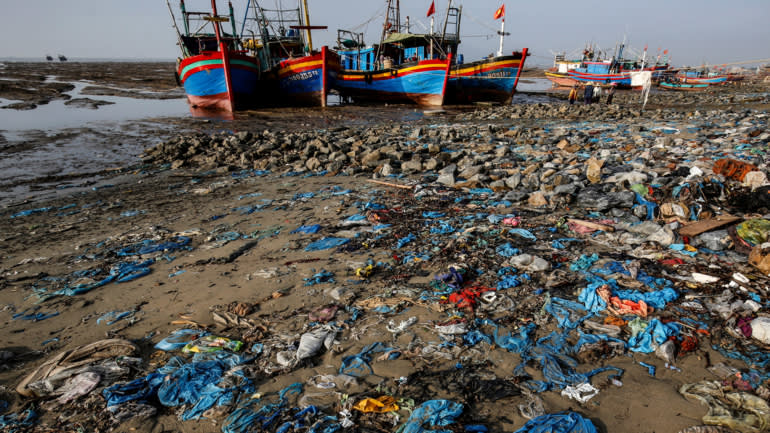 Fishing boats are stranded on a beach covered with plastic waste in Thanh Hoa Province, Vietnam, in 2018.   © Reuters

Coca-Cola and BASF, the world's biggest chemical producer, told Nikkei Asia they'll wait to see how offset programs progress. Tontoton said it has the only such program in Vietnam, while Plastic Bank runs a similar one in Indonesia and the Philippines, and the Plastic Collective covers Malaysia, Thailand, and Cambodia.

But the concept is so new that most companies haven't taken a position, focusing their efforts on other approaches.

Starbucks said it cut plastic-straw use by one billion a year, for example, while Vietnamese plastics maker An Phat Holdings said its priority is to manufacture biodegradable plastic.

Groups like Tontoton will have to prove plastic credits reduce waste or their programs will backfire, letting companies pay a fee to "claim they are taking action without making substantial changes to their business," the World Wildlife Fund said.

"Plastic credits, it's a very new market," Ekshtein said in a recent interview at his office, tucked in an alley lined with cannonball trees and sun-bleached homes. "It's like a startup, we're still bootstrapping."

His new company targets the worst ocean-bound rubbish, called orphan plastic because it cannot be recycled. Trash pickers find the single-use plastic along the cyan waters hugging Vietnam's Phu Quoc and Hon Son islands. Their goal is to collect 5,000 tons a year and send it to INSEE, part of Siam City Cement, to be burned for energy.

These cleanup programs have sprung up globally as doubts emerge about recycling, which used to seem like a win-win idea because consumers could keep consuming and the environment could stay pristine. But instead, for decades, the public believed its plastic was being recycled, only to find that 91% of it was not, according to a study in the peer-reviewed journal Science Advances, assessing all plastic from 1950-2015.

Vietnam is a focus of cleanup campaigns because it's among the top five countries sending litter to sea, along with China, Indonesia, the Philippines, and Thailand, according to Ocean Conservancy, a nonprofit based in Washington. The main caveat, though, is that these Asian countries earned this marker because they import so much waste for processing from the rest of the world.

Ekshtein predicts Vietnam will fall out of the top five, in part through the work of organizations like Tontoton, which expects to turn a profit by the end of 2021. He declined to name clients, but acknowledged the risk of "greenwashing," whereby companies whitewash their brands with eco-friendly marketing and little else. WWF remains on the fence about plastic offsets, warning in a January report that companies could pay for the credits "while still polluting from their own supply chain." Tontoton strives to clean up Phu Quoc Island and elsewhere by selling "credit" for the clean-up to companies, much like carbon-offset schemes. (Photo by Lien Hoang)

To avoid these pitfalls, Tontoton says clients sign a letter committing to multiple strategies beyond offsets, including plastic substitutes and reduction. The company helps them offset or "neutralize" plastic already used, but this isn't a "getaway car" to escape broader responsibility, Ekshtein said.

"Plastic neutralization cannot solve the problem by itself," he said.

Adidas and Allbirds use marine plastic in their shoes, while meal kit company Green Chef buys credits for plastic collected in Southeast Asia.

"Although we currently do not purchase plastic credits, we are committed to exploring well-designed initiatives that will help reduce and eliminate plastic waste," Coca-Cola Asia said. "We are engaging with partners like the World Wildlife Fund and others as they explore plastic crediting best practices."

"Starbucks is committed to becoming resource-positive, giving more than it takes from the planet," the coffee chain said in a statement, pointing to its strawless lids and paper straws. When asked if it would consider plastic credits, the company said, "We continue to explore all solutions around reusability and recycling" with partners across Asia.

The biggest solution likely will come from the U.N. Environment Assembly, which aims to reach an international accord on plastic, in the spirit of the Paris Climate Accord. Before the assembly meets in February, four countries from four continents were chosen to co-host preliminary talks this year: Ecuador, Germany, Ghana and Vietnam.

While Hanoi presses other nations for a consensus to fight plastic, companies back home disagree on the path forward.

An Phat, which exports biodegradable plastic from Vietnam to 70 countries, said single-use plastic is sometimes unavoidable, such as for medical or food safety. In those cases, acting deputy CEO Nguyen Le Thang Long said, it's helpful to have polymers that "can be broken down by microorganisms into water, carbon dioxide, and biomass."

That's especially true in places with weak recycling or high leakage into the environment, but a mix of efforts is needed, he said.

"We strongly agree that reduction of usage and strong national waste management are the best solution for the plastic pollution crisis," Long told Nikkei Asia.

The local office of Germany's BASF expressed interest in plastic offsets, but prefers that plastic be recycled, not burned.

"It is important for us to ensure that there is a commonly accepted standard for recycling credits, which ensures that plastic waste is recycled into high quality products and not downcycled," a spokesperson said.

Time will tell if the credits make a major impact or, like the shopping bag Ekshtein found, turn out to be less than promised.