Exporting nations caught without the capacity to recycle their scrap TOKYO/NEW YORK -- A Chinese embargo on scrap plastic imports has undercut shipments from developed nations to a low not seen in more than 13 years, a Nikkei study shows.

But because the waste is still being produced at the same levels, exporting countries are stuck with an accumulating and increasingly expensive problem.

China used to be a choice destination for waste plastics since exporters did not need to clean or sort out the plastics -- they were accepted as is. But the pollutants produced by the recycling process pushed the Chinese government to drop the hammer, and an import prohibition on plastic scrap was imposed at the end of 2017.

That set off a ripple effect throughout the international recycling chain. Scrap plastics were initially diverted to Thailand and Vietnam. Exports to the entire Association of Southeast Asian Nations economic community eventually ballooned to 1.23 million tons during the first half of 2018, more than triple the volume from a year earlier.

The inundation overwhelmed the recycling capacity in ASEAN countries, prompting import caps and higher tariffs. Those measures shrank scrap plastic exports by half in the second half of 2018 from the first half.

With nowhere else to go, Japan and Western nations had to deal with the used plastic themselves. But because expanding internal recycling capacity had been treated as an afterthought, backlogs started to accumulate.

Trash plastic exports from the Port of Long Beach in California have fallen to a sixth of the volume from three years earlier. There are signs that recycling plants in the U.S. state are committing to extra capital investments. But many more of California's recycling centers have closed over the past five years due to lack of profitability. Recycling pickups have ceased in a growing number of communities. 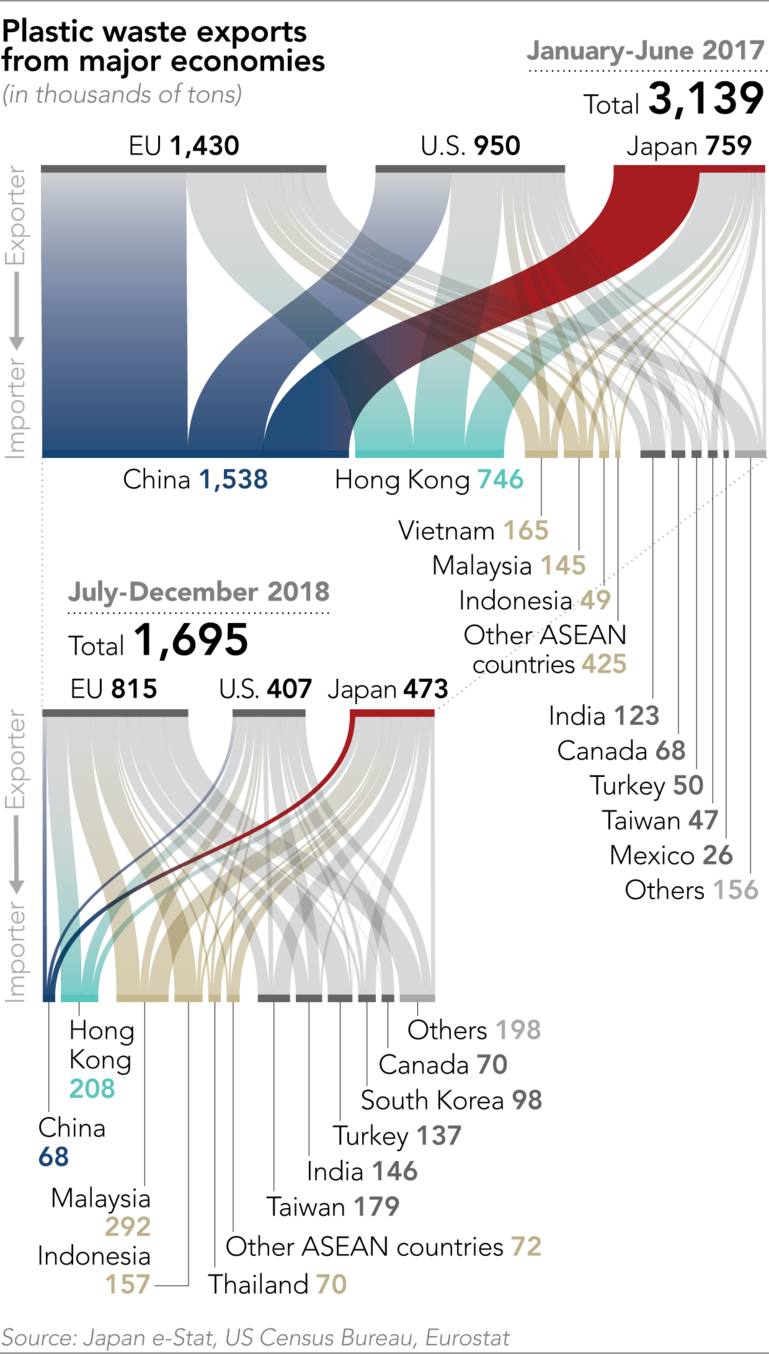 In the U.K., where nearly 60% of recovered waste plastics are shipped out of the country, policymakers are grappling with the lack of recycling capacity.

Japan's annual exports of waste plastics fell to 1 million tons from a previous 1.5 million to 1.6 million tons. That means about 500,000 tons of plastic garbage is left over from the 9 million tons produced yearly.

"Requests to accept trash have tripled from normal years," said Yoshihiro Kageyama, president of Tokyo Waterfront Recycle Power. But the recycling firm is limiting intake since it lacks extra capacity.

Plastic collectors are facing higher costs for disposal. "Prices have gone up two or three times in a year," said a manager of an industrial waste business in the Tokyo area. "I've never experienced this before."

The company cleans and disintegrates used plastics collected from clients, which are later sent to incinerating facilities or recycling plants. Incinerators used to charge around 25 yen (23 cents) per kilogram of plastic before the Chinese import ban, according to the industrial waste manager. Now the charge hovers around 40 yen.

The higher fee has squeezed earnings for the industrial waste collector. "I'll have no choice but to pass the cost onto clients," said the manager.

Brokers are finding themselves in a fix as well. "It used to be that you would send [waste plastic] to China without thinking about it," said the president of a Tokyo trading company. But with China gone, the company faces the prospect of shipping the plastic elsewhere at a greater distance, and at higher costs. "Now we have to carefully pick and choose destinations, which takes a lot of effort," added the president.

Meanwhile, businesses are not eager to invest in more incinerating facilities. "China and other Asian countries may start accepting again. I can't add more equipment prematurely," said a Tokyo operator.

Some say the problem cannot be solved by simply finding an importer with lax rules. "Japan should take the lead in creating international rules governing the quality of used plastic and distribution channels," said Yoshinori Morita, a visiting researcher at the Institute for Global Environmental Strategies, headquartered in Kanagawa Prefecture.