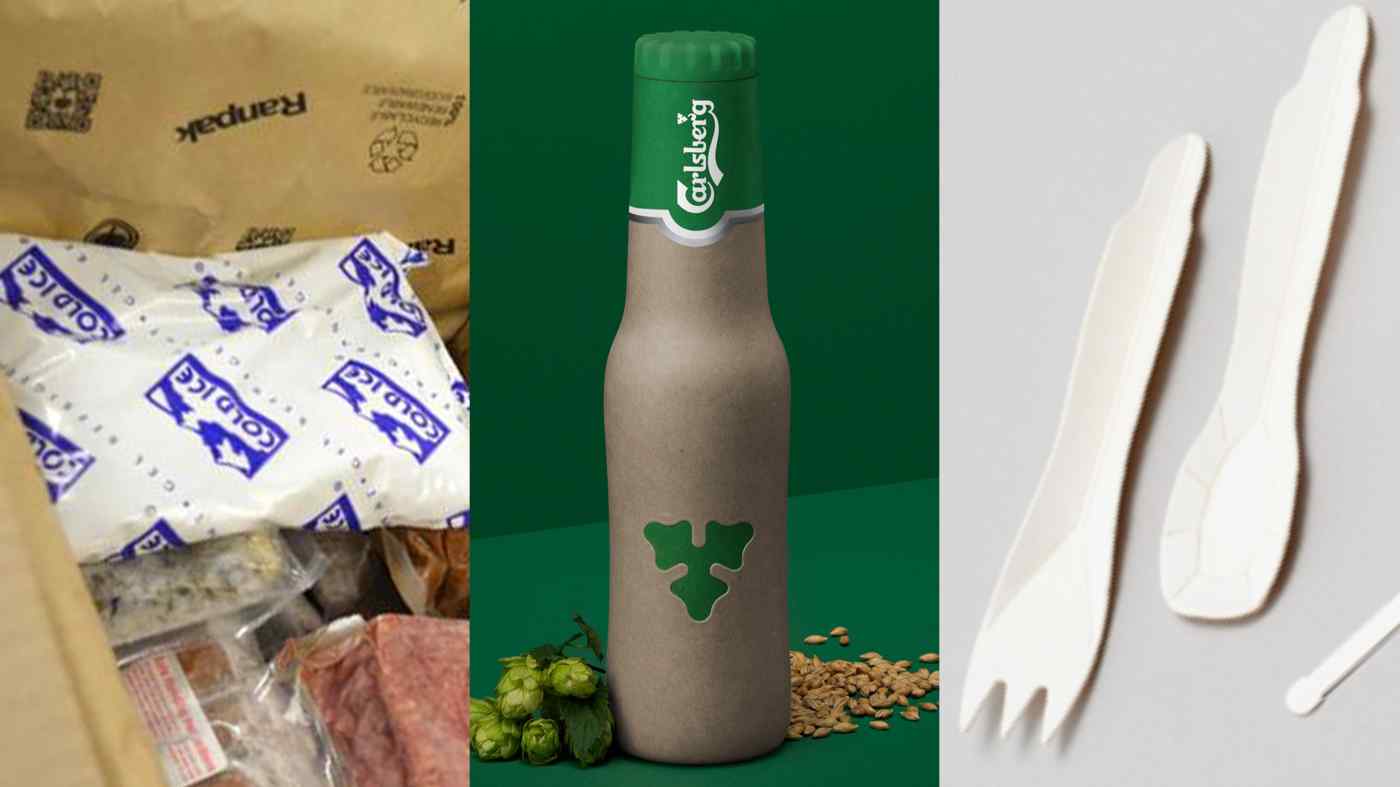 A "gel pack" made of wood, left; a beer bottle made of wood fiber and paper eating utensils. (Courtesy Ranpak of the U.S., EcoXpac of Denmark and Hokuetsu of Japan)
YUICHIRO TAKAGI and NOZOMI SASAKI, Nikkei staff writersJune 3, 2019 13:34 JST | Japan
CopyCopied

TOKYO -- As the digital age gives people fewer reasons to use paper, the material has nevertheless found itself in the global spotlight.

Earlier this month more than 180 countries agreed to tougher rules for shipping non-recyclable plastic waste across national borders. This means more countries like Japan, the world's second-biggest producer per capita of plastic waste after the U.S., will have to deal with their non-recyclables at home instead of shipping it to other countries.

It is a welcome shift for Japan's paper industry, which has faced steadily shrinking demand. According to the Japan Paper Association, domestic demand shrank to 14.69 million tons in 2017 from 16.59 million tons in 2011. Manufacturers are now coming up with new ways to supplant plastic products in everything from straws to shampoo containers.

"The shift from plastic to paper will continue," said Motoshi Muraoka, partner at NTT Data Institute of Management and Consulting. "It's an unstoppable wave."

Suppliers will have to move fast as retailers and other businesses close to the consumer move away from plastic.

Nippon Paper Industries last year unveiled a paper straw prototype that it says solves old problems. Many paper straws have an odor that alters beverages' flavor, and most have trouble standing up to the rigors of having liquid sucked through them. They get soggy, a drawback Nippon Paper has addressed with technology.

But cost is still an obstacle. Paper straws currently cost five to ten times more than their plastic counterparts at retail. Nippon Paper is working toward trimming production costs.

The company will also seek to commercialize a paper alternative to the pouches that hold refills of household detergents, soaps and shampoos. Up to now, container makers have shied away from paper products for kitchen and bathroom use due to the soggy factor.

Nippon Paper expects its Spops containers to replace refillable plastic and aluminum pouches. Spops containers are mostly cardboard, look a little like a milk carton and are designed as cartridges that can fit into and be removed from plastic dispensers. No scissors required.

Japan's market for shampoo in refill pouches is estimated to be worth about 300 billion yen ($2.72 billion). Nippon Paper wants Spops to make up about 20% of that. It aims to get the cartons on the shelves by the end of the year.

The company is positioning the product as a growth driver in the digital era, which has been marked by receding demand for Nippon Paper's flagship products, printing paper and newsprint. The Spops container was named after the feeling users might experience when pulling an empty cartridge out of the dispenser and inserting a full one in its place. (Courtesy Nippon Paper)

And the growing demand for paper containers is creating opportunities elsewhere. Hokuetsu Package in October added a printing facility to its plant in Ibaraki Prefecture. It sells base paper to container makers after printing product names and patterns on the paper. Its existing facilities have mainly processed milk containers.

The new equipment has increased Hokuetsu Package's printing capacity by just over 10%, allowing it to keep up with increased demand for other beverage and food containers as well as for paper trays.

Despite the innovations, "there are still many challenges to be overcome before paper can replace plastic," a paper industry representative said. High on that list are paper's low resistance to water and heat. In many cases, these problems are being overcome by coating the insides of paper containers with plastic. The extent to which paper products will replace plastic also remains unclear. "The plastic free movement is a big opportunity for us," a spokesman at Nippon Paper told Nikkei. "But to cover the decline in paper demand, we have to see if the replacement of plastic will expand beyond just straws and tableware."

Japanese paper makers are not the only ones trying to replace plastic. Their U.S. and European rivals are coming up with their own solutions.

Kotkamills, a long-established paper company in Finland, has developed a paper coffee cup that does not have an inside coating, something that is usually considered necessary. This will be "a game changer" for the industry, CEO Markku Hamalainen said.

Danish packaging company EcoXpac has developed the biodegradable Green Fiber Bottle, which is made from wood fiber, in partnership with brewer Carlsberg. The glassless, plasticless bottle will hit stores on a trial basis by the end of this year.

Ranpak, a big U.S. packaging materials maker, is selling a substitute for all the gel packs that help Japanese consumers keep cake and other refrigerated foods cold while on the way home. The packs are made of sustainably sourced wood, and can also replace Styrofoam and plastic packaging materials.

The U.S. company expects the packs, which are naturally degradable, to ring up sales of 100 million yen in Japan by 2020. Nippon Paper says its prototype has overcome some of the problems sometimes associated with paper straws. (Courtesy Nippon Paper)

While paper alternatives to plastic products are expected to experience greater demand in the coming years, they will not be cheap. "Compared with plastic straws, paper ones are expensive," a food service company executive said.

It will also become important for paper suppliers to say how they procure their wood, paper's raw material.

ESG investors -- those who put their money into companies that mind how they impact the environment and society, and that also have good corporate governance records -- might be influencing the shift from plastic to paper.

If paper companies are to appeal to these investors, it will be important for them to get a certification that shows wood is sourced in an environmentally, socially and economically sound manner.