JAKARTA/TOKYO -- Facebook is facing fresh scrutiny in Asia, home to more than a third of its users, after the social media giant announced that millions of users in the region may have had their data used improperly by a data analytics company tied to Donald Trump's U.S. presidential campaign.

The governments across the region including Indonesia, the Philippines and Australia have stepped up their investigations into the company after it announced on April 4 that up to 87 million users may have had their information "improperly shared" with data analytics firm Cambridge Analytica.

While more than 70 million of these users were in the U.S., 1.18 million Filipinos and 1.1 million Indonesians, along with tens of thousands of Indians, Vietnamese and Australians may also have been affected, according to data released by Facebook.

On Friday, the Philippine National Privacy Commission, an agency which administers data protection, said it would "continue to call on Facebook to face us Filipinos with a new level of transparency."

"This should begin with their terms of service and settings that could be unclear to users," the government agency said. "Mark Zuckerberg claims he values the trust of his customers. This incident involving Cambridge Analytica clearly puts this to question," it added, referring to Facebook's chief executive.

The commission called on users to "minimize the personal information they share online and maximize the use of existing privacy protection features and tools."

In Indonesia, Minister of Communication and Information Rudiantara told Bloomberg in an interview that if it is necessary to shut down Facebook, he will do so. Indonesia has a record of shutting down social media, banning the encrypted messaging app Telegram last year, and taking similar measures against the blogging site Tumblr this year.

Rudiantara summoned the head of Facebook Indonesia's public policy, Ruben Hattari, to warn the company to take adequate measures to protect personal data. According to the ministry, the penalties for failing to protect personal data could include a maximum of 12 years in jail and/or a maximum fine of 12 billion rupiah ($876,000). The minister requested that Facebook stop or disable applications that allow third parties to access the personal data of Facebook users.

Hattari said Facebook was willing to cooperate with the ministry.

Angelene Falk, head of Australia's privacy watchdog, the Office of the Australian Information Commission, said on Thursday it had opened a formal investigation into Facebook to determine whether the leak had breached the country's privacy laws. Facebook said more than 300,000 Australians may have been affected.

"Given the global nature of this matter, the OAIC will confer with regulatory authorities internationally," Falk said in a statement.

The serious response by Asian regulators indicates how the region is waking up to the reality that the data-driven practices of SCL, Cambridge Analytica's parent company, may have had far-reaching effects beyond the U.S.

Christopher Wylie, the former Cambridge Analytica data analyst-turned-whistleblower, recently tweeted that SCL had been involved in elections in India. The country's Ministry of Information Technology has sought clarity from Facebook, giving the company a deadline of April. 7 to respond to whether the data of Indian voters were compromised. 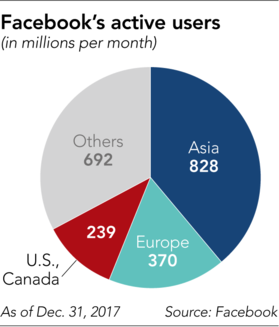 It is still unclear whether SCL's tactics influenced the outcome of elections. Yet the revelations have cast a fresh shadow on Facebook's activities in Asia, where the social media site has grown rapidly, but is now under scrutiny for the way it handles user data resulting in the spread of  "fake news" and hate speech. In Indonesia, where a presidential election is scheduled for April 2019, President Joko Widodo has set up a cyber agency to combat fake news and other internet-related challenges.

In Myanmar, the company has been criticized for providing a platform for hate speech against the Rohingya Muslim minority. Facebook chief executive Zuckerberg said in a recent interview with Vox that the company has been able to detect inflammatory speech on its messaging app Facebook Messenger. But his remarks swiftly prompted a backlash from Myanmar civil society groups, who sent him an open letter on Thursday saying Facebook's response was "not quick enough and highlights inherent flaws" in the company's ability to respond to emergencies.

The potential fallout in the region for the company could be huge. Facebook has 828 million monthly active users in Asia, nearly double the figure of three years ago and now accounting for more than a third of its total users. Its growth has been fueled by the rapid spread of inexpensive smartphones, and Facebook's own efforts to adapt to emerging markets, where internet connections are poor and incomes low. A simplified version of its app, called Facebook Lite, uses less data than the regular version, for instance.