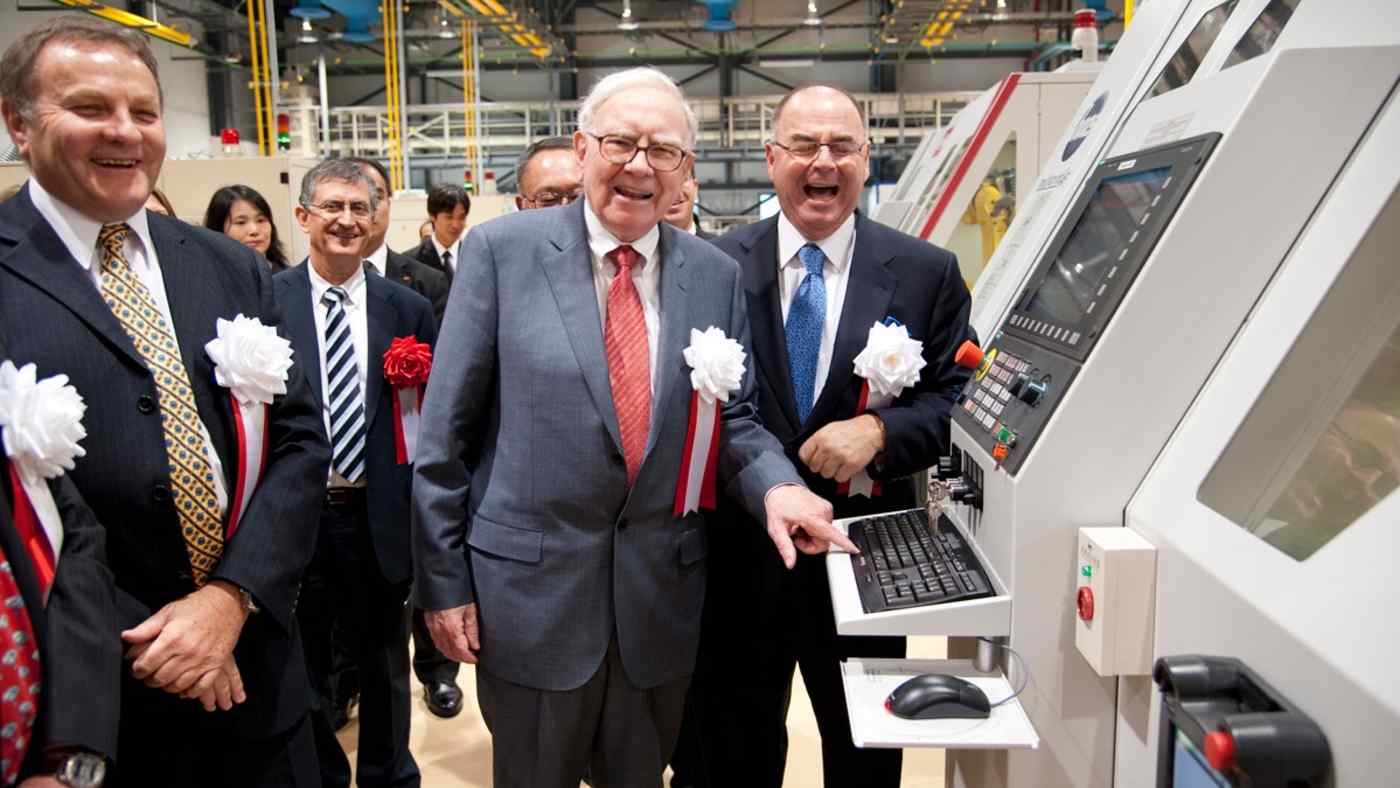 TOKYO -- Ten years since the 2011 earthquake and tsunami in northern Japan, Tungaloy, a local carbide tool manufacturer, has taken on the challenge of reorganizing its management, taking inspiration from the investing style of famed American investor Warren Buffett, as the region rebuilt following the disaster.

Headquartered in the city of Iwaki in Fukushima Prefecture, Tungaloy was spun off from Japanese electronics group Toshiba, then in 2008 became part of one of the world's leading toolmaking companies, IMC Group, which was part owned by Buffett. In the years since, its highly automated factory has turned into a source of steady revenue, and sales have doubled. The company has benefited from Buffett's management style, which seeks long-term sustainable growth from investments.

On Feb. 13 this year, an earthquake registering at six on Japan's seismic intensity scale -- a quake strong enough to damage buildings -- struck off the coast of Fukushima Prefecture. Iwaki was also hit by the tremor. A week after the earthquake, some of the walls at Tungaloy's factory are showing cracks.

However, less than a day after the quake, the plant reopened. It usually takes time to get equipment back online after such a natural disaster has knocked it out of place. Specialists need to be brought in for inspections, and other tasks can take more time. But Tungaloy's plant was able to recover so quickly "in large part because we have an in-house team specializing in maintenance," said Kazuhiro Mishina, head of the Iwaki plant.

This group of specialists was an idea that came from Tungaloy's parent company, IMC. Upon being acquired by IMC, majority owned by Buffett, the first thing Tungaloy was told to do was to set up a specialist in-house maintenance team. It is rare for a company to maintain and repair its own machinery and equipment, rather than relying on external contractors.

The reason for the change was clear. If the company calls in a contractor every time a machine breaks down, stoppage time will increase. If there are dedicated in-house personnel, however, the company can quickly recover from unexpected problems, increasing operating time and reducing opportunity loss. "We've been training multifunctional workers who can maintain various equipment while also doing their daily work," said Tungaloy President Satoshi Kinoshita. 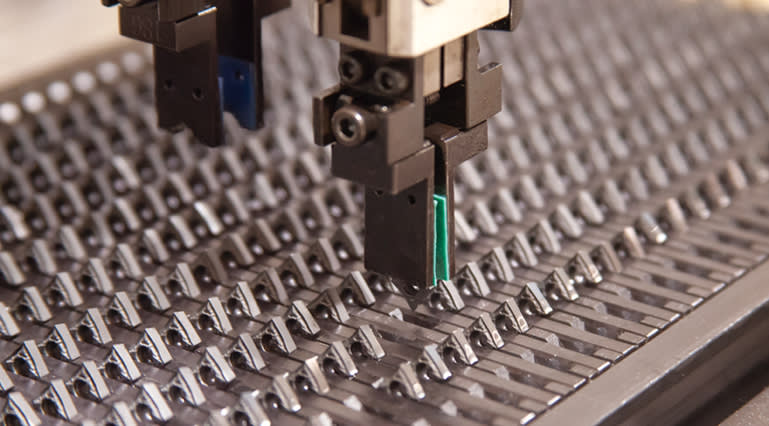 Since joining the Buffett-owned group in 2008, Tungaloy has automated tasks that were previously done by hand.

Tungaloy was first spun off from Toshiba in 2004 in a management and employee buyout. Then in 2008 it became a subsidiary of IMC, whose main business was Israeli cutting tool manufacturer ISCAR. Berkshire Hathaway, the investment company led by Buffett, had acquired IMC in 2006.

"We stopped chasing short-term profits and sales," Kinoshita said of the difference in focus for the company between its different parents, Toshiba and IMC. Before joining the Buffett-owned group, management personnel changed every three or four years, and each time the management policy changed with them. The company reported its financial results every quarter, and it had to restructure under Toshiba's direction if its performance worsened.

The Buffett style of management is the polar opposite of what Tungaloy experienced during its Toshiba era. IMC does not pursue short-term profits or sales. Instead, it regularly seeks high sales and profit margins.

"It's not, 'we ran hard yesterday so we rest today,' it's 'we run as hard as we can everyday'," Kinoshita said.

Quickly setting up the specialist maintenance team was based on the idea of keeping machinery and equipment -- the source of the company's revenue -- operating as much as possible.

Buffett chose Tungaloy's plant as the destination for his first visit to Japan in November 2011. "We invest in companies that can grow sustainably, are competitive, and have a business that is vital to society," Buffett said when asked at a news conference what kind of companies he would like to invest in. "We look for companies that will still be growing in 30 or 50 years."

Buffett focuses on a company's gross profit margin as a condition for it to grow sustainably. Companies with high gross profit margins are likely to have a competitive advantage, earning revenue that far exceeds the cost of their sales. Cost competitiveness through constant cost reduction is also important.

Under Buffett's style, Tungaloy shifted to a strategy of not competing on price. In Japan, sales prices of parts and materials are usually driven by buyers who have significant purchasing power, such as automakers. Many subcontractors are unable to sufficiently negotiate prices and struggle to maintain profitability. That used to be the case with Tungaloy as well. "We changed our mindset," said Kinoshita. "The price in Japan is not the price elsewhere in the world."

To increase its power at the negotiating table, the company made use of information and expertise from IMC, which regularly supplies its subsidiaries with the prices that goods sell for. A specialized team searches for price trends in carbide tools in Asia, Europe, the U.S. and elsewhere, and shares the results with the group. The goal is to use the information in each company's sales strategy.

Carbide tools are made from rare metals, such as tungsten and cobalt. There is a high risk of dependence on China for procurement, and price fluctuations due to market conditions can be wide. Tungaloy created a system to sell products at a price suited for each region, passing on its investments costs.

The company focused its management resources on increasing the added value of its products and developing its price negotiation capabilities.

"The thing that changed the most upon joining IMC is that we developed high value-added products," said Kinoshita.

The company allocated more of its human resources to product development, and its number of new products increased fivefold since it joined IMC. As a result, sales to overseas markets increased, and the company's export ratio, previously less than 50%, rose to just under 70%.

Automated production played a major role in the company's focus on added value. Carbide tools are cutting edges that are attached to machines that cut and process parts, and are essential for manufacturing automobiles and other products. Smaller ones can be just a few millimeters wide. Previously, each product had been manually transferred to a pallet by an employee and then carried to the next processing phase.

Things changed dramatically when the company joined IMC. Now, there are almost no employees moving products by hand, replaced instead by robots. Rather than a factory bustling with humans, fully loaded pallets constantly come and go, carried by conveyors within the factory and to other buildings at the facility.

There is a specialized system to manage the inventory, and it is easy to see the location of each pallet. The automation rate, previously about 50%, has increased to 90%. 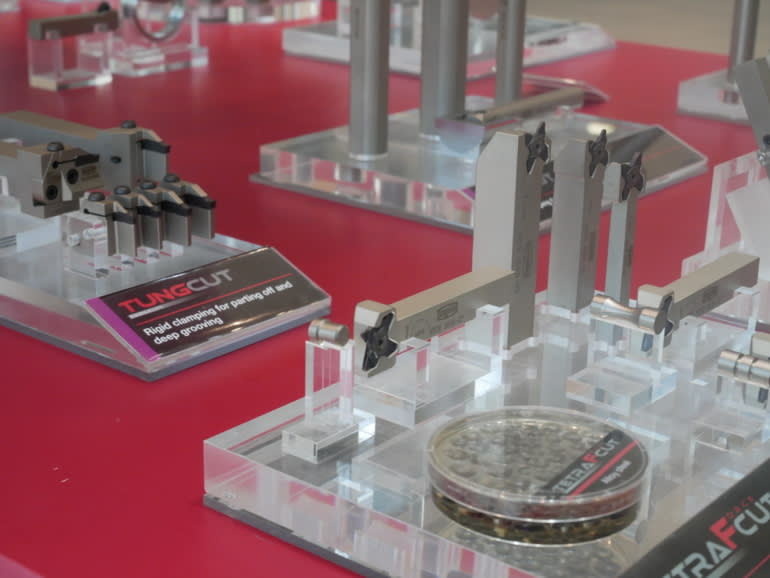 Tungaloy is preparing for major changes in business conditions, such as the electrification of vehicles.

Tungaloy joined IMC more than a decade ago. The company does not disclose its earnings, but sales are 1.7 times greater and manufacturing costs have dropped 25% over that time. It continues to maintain a double-digit operating profit margin. The company's ability to stay profitable while maintaining a large inventory is thanks to a combination of high product turnover, a change in pricing strategy, and reforms to productivity, such as increasing automation.

But, while Tungaloy has significantly improved its performance, maintaining sustainable growth while addressing changes in the business environment will be a challenge.

The move to electric vehicles is well under way, with more cars to be powered by motors instead of gasoline engines. Carbide tools are especially in demand for processes that require complex machining, such as the manufacturing of engine parts. As the electrification of autos progresses, "we may not be able to sell as many parts as we did in the age of engines," said Mishina, the manager of the Iwaki plant. IMC's team of market experts are exploring industry trends, and will share new opportunities they identify with the group. The focus on China, the largest market for electric vehicles, is a part of this.

Tungaloy's products are now mostly used for automobiles, but the company needs to expand its market share in a wide range of other industries. It has not ruled out mergers and acquisitions as a method of achieving growth. The only way to continue making in-demand products, even as customers and markets change, is to invest resources in products with higher added value. "We need to always be developing good products and making them at low cost," said Kinoshita.

Buffett's approach is to leave management to people he trusts who are close to on-the-ground activities. An independent management that can respond quickly to market changes is essential to drawing out a company's competitiveness.

Tungaloy has exchanges with IMC executives, such as marketing staff, about once every two months, but the parent company does not send in its own executives or intervene in the Japanese company's way of doing business. It also does not seek short-term returns on its capital investments.

Even when Tungaloy's performance suffered after its acquisition in 2008 because of the global financial crisis, IMC went ahead with its investment plan for a new plant. It was more concerned with results than the process.

It remains to be seen whether the company will continue to grow for the 30 or 50 years that Buffett expected. Tungaloy recovered quickly from the earthquake this February, and has successfully implemented corporate reforms. Looking forward, the true value of Tungaloy's sense of management, honed by a Buffett-style independence and decentralization, will be put to the test.