TOKYO -- A small town in Fukushima Prefecture is betting on hydrogen technology to attract new businesses and residents displaced by the devastating earthquake and tsunami ten years ago, with Toshiba and Sumitomo Corp. already moving in.

The town of Namie was once home to more than 20,000 people before the disaster on March 11, 2011. Today, only about 1,500 came back despite 17,000 people still listed as official residents. The entire town was shuttered for years due to high levels of radioactivity from the Fukushima Daiichi nuclear power plant, where reactors melted down after the tsunami. The town only partially reopened in 2017.

Residents of Namie surveyed last year showed that over 50% decided not to return, while 25% are undecided. To draw people, Namie's mayor Kazuhiro Yoshida told Nikkei Asia that "the town is rebuilding to make a place that will be exciting and admired," adding that it is his job to attract those looking to make a home.

Hydrogen is seen as a pillar of Japan's commitment to achieving net-zero greenhouse gas emissions by 2050, because hydrogen does not discharge carbon dioxide when burned.

The town asked to be part of the government project, "having felt a strong need to shift to renewable energy," according to Yoshida. Namie is near the Daiichi nuclear power plant and the town of Futaba, which was entirely evacuated after the disaster. Yoshida said he never questioned the safety of nuclear facilities before the accident, but now maintains that "nuclear power resulted in this situation, and 90% of the population remains gone."

Namie currently hosts a number of green hydrogen projects. Trading company Sumitomo Corp. is setting up hydrogen stations for passenger cars, buses, trucks and bicycles. Marubeni announced last year a feasibility study to supply green hydrogen to houses. There is also a plan for a 100% renewable energy industrial zone, where companies could plug into green electricity as well as green hydrogen. 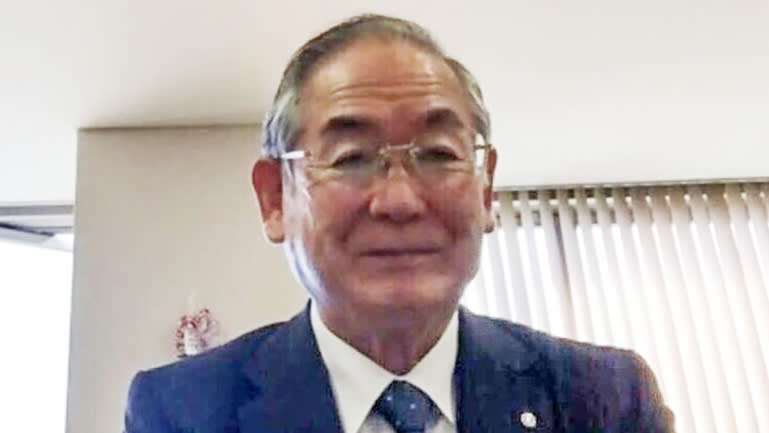 Namie Mayor Kazuhiro Yoshida wants his town to be a pioneer in making a hydrogen society.

The town just started using Toyota's Mirai fuel cell vehicle for public use. Toyota President Akio Toyoda visited the town this month and told reporters that he would be able to start various projects centered around hydrogen technology in Fukushima.

According to Yoshida, Namie is also planning to sign an agreement with the U.S. city of Lancaster in California to work together on hydrogen technology. "It is new technology, so we want to share what we are doing with Lancaster," which is sunny and ideal for producing renewable energy. "We will be sharing data in collaboration with companies to improve our technologies," he added.

Yoshida also acknowledges that Namie's future growth "needs more than a power plant" or hydrogen production. There is still basic infrastructure, such as medical and retail services, that needs upgrading.

The town only has one supermarket, and its soil is barren because of massive decontamination efforts used to remove radioactive substances from the ground. Still, according to Yoshida, there are people who want to relaunch their agricultural businesses. But he said the town would have to make it easier for them to return by creating new pasture lands and other such measures.

"Namie was so beautiful before; golden rice fields and abundant seafood from the ocean," said Yoshida, who was a rice farmer in Namie before becoming mayor. These livelihoods are essential for the town to rebuild, he said.