Yanai made his remarks at the Nikkei Global Management Forum in Tokyo, which every year brings together a carefully chosen group of the world's most accomplished executives to discuss corporate strategy, management philosophy and the latest trends in management from a global perspective.

The companies Yanai championed are collectively known as GAFA. In many quarters, the digital titans are being assessed "as a threat to the world," Yanai said. "But I tend to disagree with this kind of criticism, because these businesses easily went beyond the framework of national boundaries."

They offer "infrastructure," he said, and companies that benefit from their services "need to be thankful."

The Uniqlo boss drew a distinction between universal standards and national ones. "Rules and regulations that are viable across the world are needed, but regulations that are only for the sake of your own country's interest are no longer needed," Yanai said. "Hegemony and conflict would lead to devastating consequences, and all the business leaders need to be vocal that this is very dangerous."

His remarks come as Fast Retailing continues to expand its global footprint. The company recently opened its first store in India, its 24th overseas market. The group operates more than 2,000 Uniqlo stores worldwide.

While Yanai defended GAFA, the president and CEO of McDonald's Holdings (Japan) spoke up on behalf of Homo sapiens. Technology is capable of incredible things, Sarah Casanova said, but it is no substitute for "real human interaction."

Casanova said the global fast-food chain is committed to bringing people together by operating large numbers of restaurants and promoting diversity -- be it in terms of age, ethnicity or gender.

As an example, she said McDonald's Japan employs 6,200 retirees. The oldest crew member, a 91-year-old, was hired seven months ago. "Some worry if they are able to learn our operations, if they are able to remember everything they need to know. ... But we have a very thorough training program," she said.

"We live in a society where so many people are glued to their smartphones. The technology becomes a barrier, keeping people from talking to each other face-to-face and getting to know each other." McDonald's, she said, "provides opportunities for connection and engagement with others."

Another speaker, Nestle Chairman Emeritus Peter Brabeck-Letmathe, said that although today's disruptive technologies and social challenges may appear daunting, they are full of opportunities. His speech focused on aging populations and the role nutrition can play to mitigate the impact.

"We have a population that is going to grow older and older. This requires a health care system that is much better adapted to the needs of the elderly," Brabeck-Letmathe said. He stressed that proper nutrition is critical for healthy aging and said it is up to food manufacturers, like Nestle, to develop products that will help keep brain cells active in old age and combat diseases such as cancer. Big data, he suggested, will eventually allow the industry to "personalize nutrition" to meet the unique needs of each individual.

As a result, Kirin Holdings CEO Yoshinori Isozaki predicted that "global sales of beer -- Kirin's mainstay -- are likely to go down further over the next 10-20 years." Isozaki said Kirin is diversifying into the pharmaceutical and food supplement sectors, building on biotechnology expertise gained as a brewer.

In a separate panel discussion, Alan Parker, chairman and founder of public relations company Brunswick Group, summed up the fundamental challenge for companies in this more socially aware era.

"Social issues that companies were told to stay away from are now being brought to companies," Parker said. "Corporations around the world are being asked: 'Are you part of the problem or part of the solution?'" 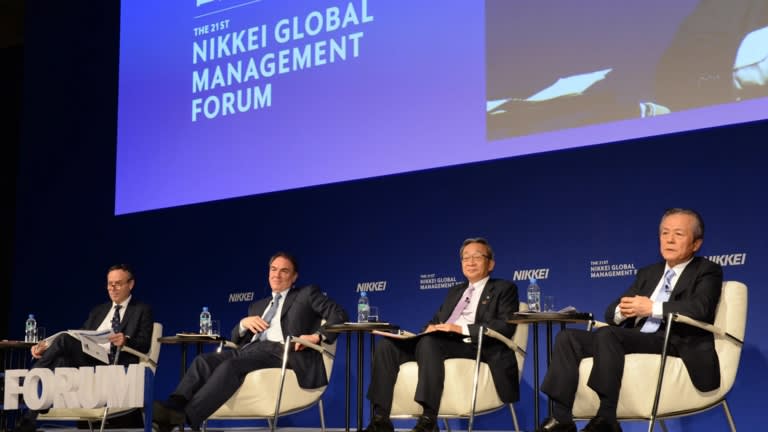 From left: Lionel Barber, editor-in-chief of the Financial Times; Alan Parker, chairman and founder of Brunswick; Kuniharu Nakamura, chairman of Sumitomo; and Hiroshi Komiyama, chairman of the Mitsubishi Research Institute discuss the next paradigm shift in global business. (Photo by Karina Nooka)

The discussion explored the many ways technology is changing the world and business as we know it, and how companies can keep up. Japanese participants argued that disruptive players like U.S. ride-hailing giant Uber Technologies are here to stay despite questions of profitability and high valuations.

"Lines between industries will blur and disappear," said Kuniharu Nakamura, chairman of conglomerate Sumitomo Corp. "Uber faces lots of restrictive [rules] in Japan but is penetrating in many parts of the world. The industry does not belong to incumbent automotive companies."

The business model of carrying passengers from point A to point B is nothing new, Nakamura said. But he said technology creates "more convenience" for users and overcomes "some of the pain points," adding, "That is a viable business."

Hiroshi Komiyama, chairman of think tank Mitsubishi Research Institute, urged Japanese companies to invest more at home. "There is no innovation" in Japan, he said, pointing to the country's lack of comparable companies to Uber or leaders in areas like renewable energy. "Companies need to explore their core businesses but always have to work on new businesses."

The U.S.-China trade war was another key issue raised during the forum. Arun M. Kumar, chairman and CEO of KPMG India, highlighted the growing clout of companies in the Indo-Pacific region. "The recalibration of trade relations is creating new opportunities for countries in this region," he said, noting how American companies are shifting their manufacturing capacity to "less exposed geographies like Vietnam, India, Malaysia and Bangladesh." 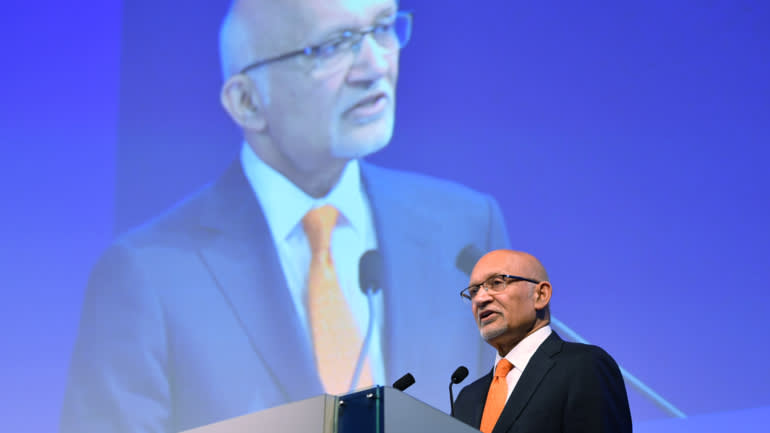 "Export dependent economies like Singapore, Malaysia, Vietnam and Thailand will also stand to gain from the recent shift in trade equations with the U.S.," he added.

This year's Global Management Forum -- jointly hosted by Nikkei, IMD and Harvard Business School -- focuses on how executives around the world are navigating the trade war, Brexit and other upheavals. The lineup of speakers also includes Nicolas Baretzki, CEO of Montblanc International, Tan Hooi Ling, co-founder of Singaporean ride-hailer Grab, and Christophe Weber, president and CEO of Takeda Pharmaceutical.

The forum runs through Tuesday.

Find out more about the event here.