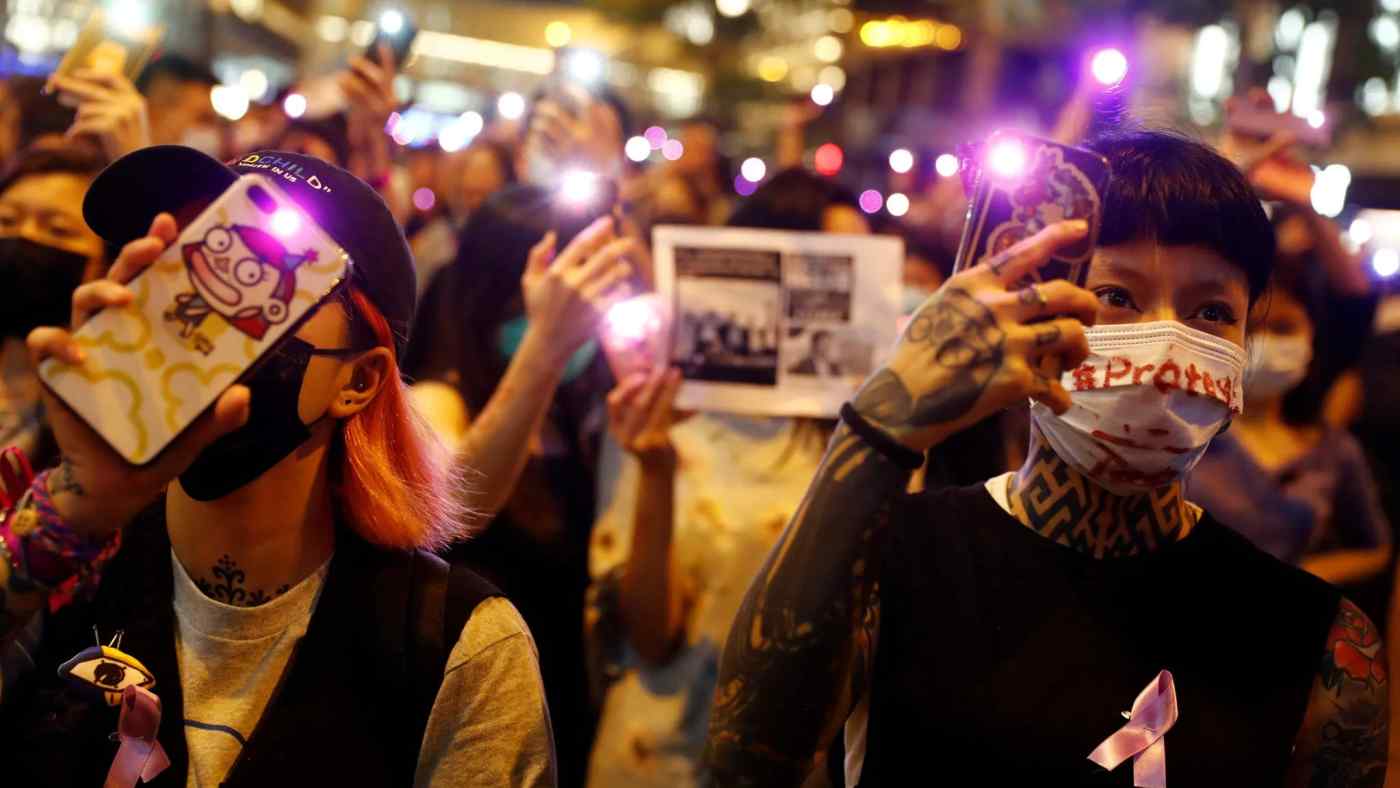 BEIJING/NEW YORK -- Under pressure from China, Apple said on Thursday that it has removed an iPhone app used by protesters in Hong Kong to show police activity.

"[The app] has been used in ways that endanger law enforcement and residents in Hong Kong," Apple said in a statement. The California-based company initially rejected the app for containing content that facilitates illegal activities and evades law enforcement.

The move came after the People's Daily said in an online article Tuesday night that the HKmap.live software, available on Apple's App Store, encourages violence in Hong Kong and helps protesters evade the police.

The criticism in China hits Apple in one of its most important markets for the iPhone -- second only to the U.S. in sales -- and its main production base for the device. Should it remain under pressure from Beijing, the company could face a risk of boycotts or negative effects on manufacturing.

The app's developer responded angrily to the tech giant's move. "We once believed the app rejection is simply a bureaucratic f up, but now it is clearly a political decision to suppress freedom and human right in Hong Kong. It is disappointing to see US corps such as Apple, NBA, Blizzard, Tiffany act against freedom," the developer tweeted.

Since protests in Hong Kong broke out in June, American entities from Nike to the National Basketball Association have been caught in mainland China's outrage over affiliated individuals showing support for the city's protesters. And as the political rift between China and liberal democracies widens, boycotts from both Chinese consumers and its government have become a frequent occurrence.

Addressing such pressure, Republican Sen. Marco Rubio of Florida tweeted Wednesday that he has "formally asked [the] Trump administration to fully enforce anti-boycott laws" prohibiting American individuals or entities such as U.S. subsidiaries of Chinese companies "from complying with foreign boycotts seeking to coerce U.S. companies to conform with China's government views."

American jeweler Tiffany this week also encountered a Chinese backlash over a social media post that showed a model covering her right eye, in what some observers assumed was a reference to a Hong Kong protester hurt in a clash with police.

Tiffany removed the post and expressed regret for the incident, but not before it provoked criticism in a lucrative market.

"There is a rising scrutiny in China on whether foreign brands' social media postings contain material out of line with the Chinese government's views," a fashion industry source said.

Meanwhile, the NBA remained on the defensive in China after a weekend tweet, since deleted, from a team general manager in support of Hong Kong protesters.

Shanghai authorities canceled an NBA event scheduled for Wednesday night. An exhibition game in the city went ahead as scheduled Thursday, but NBA ads were taken down from the arena neighborhood.

At least nine of the NBA's Chinese partners have said they are cutting ties with the sports league -- including Tencent Holdings, which acquired exclusive rights to stream NBA games digitally in China for reportedly $1.5 billion, Nasdaq-listed Luckin Coffee and smartphone maker Vivo. And e-commerce leader Alibaba Group Holding has pulled the league's products from its online marketplaces.

State-run China Central Television said Tuesday it would halt some broadcasts of NBA exhibition games in the country. Comments against China's sovereignty are "not within the scope of freedom of speech," the broadcaster said.

In a statement Tuesday, NBA Commissioner Adam Silver said it is "inevitable that people around the world -- including from America and China -- will have different viewpoints over different issues" but that "the NBA will not put itself in a position of regulating what players, employees and team owners say or will not say on these issues."