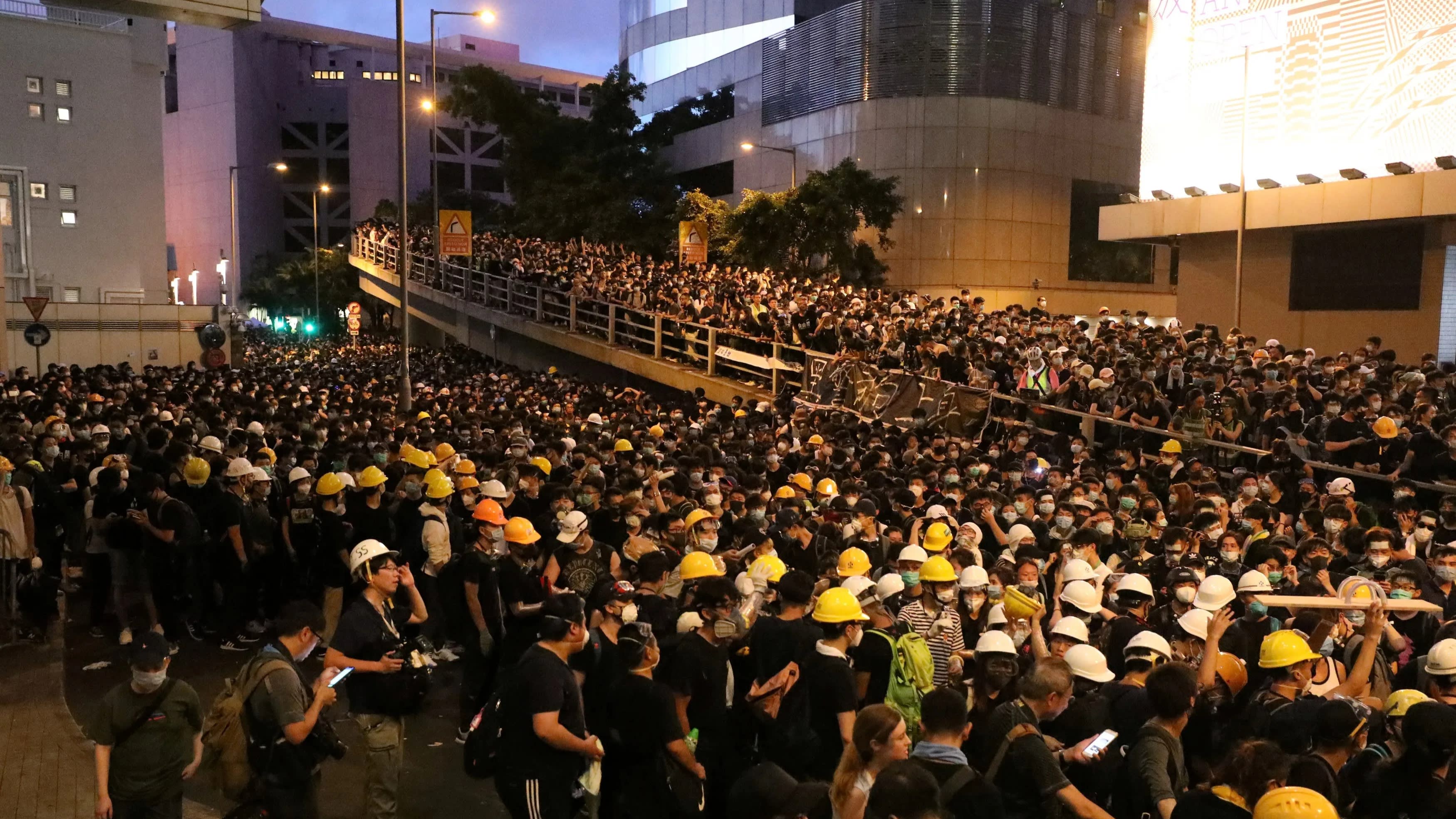 HONG KONG -- Thousands of protesters blocked major roads around Hong Kong police headquarters Friday, demanding that the government withdraw the controversial extradition bill and denouncing what they said was the use of excessive force against demonstrators last week.

Protesters also used barricades to close off major roads around government headquarters and staged sit-ins at other nearby government buildings, as tensions continued to mount over the legislation, which would allow people in Hong Kong to be transferred to mainland China.

A Hong Kong government spokesman issued a statement later on Friday saying that the government "had put a stop" to legislative work on the bill.

"The current term of the Legislative Council will end in July next year, after which the Bill will lapse. The Government accepts this reality," the spokesman said, acknowledging that the bill will expire when the current legislative session ends in July 2020.

But it is unclear whether this will be enough to put an end to the demonstrations, with students and other protesters demanding that Hong Kong Chief Executive Carrie Lam withdraw the bill.

Protesters are also demanding that those arrested be released.

A tense standoff with police came Friday when protesters blocked a patrol car as it attempted to enter the police compound.

Fernando Cheung Chiu-hung, a Labour Party lawmaker, told the Nikkei Asian Review that he tried to negotiate an end to the stalemate by allowing the officers to temporarily abandon their vehicle, but police headquarters rejected that offer because the patrol car contained arms.

Cheung said the stalemate ended when more than two dozen officers surrounded the patrol car and guided it into the gated compound. "The police exercised self-restraint and did not use tear gas or pepper spray" to disperse the crowd, the pro-democracy lawmaker said. Hong Kong's Central Government Offices were closed in anticipation of the demonstrations, and the city's Legislative Council, or parliament, closed early. Cheung said it was unclear if LegCo would resume sessions on Monday.

Nearly 2 million demonstrators marched through the streets of Hong Kong last Sunday, according to organizers, in opposition to the extradition law. That followed a similar rally a week earlier that brought out an estimated 1 million people.

On June 16, a demonstration at government headquarters turned violent when police use rubber bullets, tear gas and pepper spray to disperse crowds. More than 80 people were injured and 32 were arrested, although several have been released without charge.

Lam suspended legislative debate on the bill this week but has not fully retracted it, which protesters are demanding. Lam said she would not proceed with the legislation if public concerns cannot be "adequately addressed."

A 26-year-old pharmacist, who gave his surname of Lo, said he did not trust Lam, the chief executive, to keep Hong Kong's best interests at heart. He vowed to continue protesting until the bill is completely withdrawn.

Lo said that he also took part in the 2014 Occupy Central protests, also known as the Umbrella Movement, in which people demanded the right to vote for chief executive, rather than Beijing-sanctioned candidates for the city's top post being chosen by a select committee. Protesters at that time failed to get the government to bow to their demands, and many Hong Kong residents grew weary after the standoff that saw major roads in key business districts blocked for nearly three months.

Cheung said that protesters today have learned that "occupying roads for a prolonged period is not something they want to do." But he added that demonstrators "are frustrated that the government -- after 2 million took to the streets -- didn't budge."

One recent university graduate, a 22-year-old man who declined to give his name, said he hopes that U.S. President Donald Trump will speak with Chinese President Xi Jinping at the Group of 20 summit in Japan next week to bring positive change to Hong Kong.

"I think some Hong Kongers are expecting a talk between Xi and Trump would shed light on Hong Kong, and maybe it would alter the current situation that would be favorable for Hong Kong citizens," he said. "That would be the biggest help that we could get."

A 16-year-old secondary school student, the daughter of parents from mainland China who support the Communist party, said she is secretly joining the street protests this month.

She was only 11 during the Occupy Central protests, and "I didn't have a strong identity as a Hong Konger that time," she said. "However, the extradition amendment made me feel I am a Hong Konger."