Unprecedented news conference came after weeks of protests in the city Yang Guang of the Hong Kong and Macao Affairs Office of the State Council attends a news conference in Beijing on Monday.

HONG KONG -- In an unprecedented news conference, Beijing's top body for Hong Kong affairs voiced support for the city's police and leadership while denouncing the violence of some protesters.

"The central government firmly supports the leadership of chief executive Carrie Lam, firmly supports the strict law enforcement of Hong Kong police, as well as supports the punishment of criminals by the relevant departments in accordance with the law," Yang Guang, a spokesman for the Hong Kong and Macao Affairs Office, told reporters in Beijing.

The briefing by the body under the State Council, China's cabinet, was its first to explicitly address issues in Hong Kong since its handover in 1997. It follows weeks of increasingly violent protests, triggered by the now suspended extradition bill, that have plunged key districts of the Asian financial center into chaos.

At the briefing, Yang praised the "excellent performance" of the city's police during the protests, despite accusations that they have used excessive force in cracking down protesters.

Yang, however, skirted a question asking whether the central government will consider mobilizing troops of the People's Liberation Army to restore order in Hong Kong. "The Basic Law has very clear explanation on this matter," Yang said, referring to the city's mini-constitution. Last week, Senior Colonel Wu Qian of China's defense ministry hinted that Beijing can deploy troops to Hong Kong to maintain order if the city's government requests help when answering a question of journalist.

Protesters are now making five distinct demands: Withdraw the bill; rescind the characterization of protesters as rioters; the unconditional release of arrested protesters; the formation of an independent commission to investigate the police; and the implementation of universal suffrage.

Jimmy Sham, convener of Civil Human Rights Front, which has organized several mass protests since June said it was "very disappointed" that the State Council allows Lam to keep her job despite her public support plunging to a record low in a recent poll.

"To let our city to be able to resume to normal from chaos created by Carrie Lam, our five demands must be answered with real actions," he said.

Meanwhile, Yang blames "irresponsible figures" from the Western countries for "making irresponsible comments" on Hong Kong to stir up troubles for China. Yang also called for all the people in Hong Kong to condemn the violent behavior of "a small number of activists," as he claimed that punishing the outlaws is "the most pressing issue" in Hong Kong right now.

The spokespeople spent much of Monday's briefing reiterating Beijing's stance on Hong Kong, such as highlighting the importance of "one country" over "two systems" in Hong Kong's political framework. But the tone of the officials was softer than in recent editorials in state-backed newspapers.

Willy Lam, an adjunct professor at the Chinese University of Hong Kong, described the news conference as "unexpectedly mild," as there was no mention of PLA troop deployment. 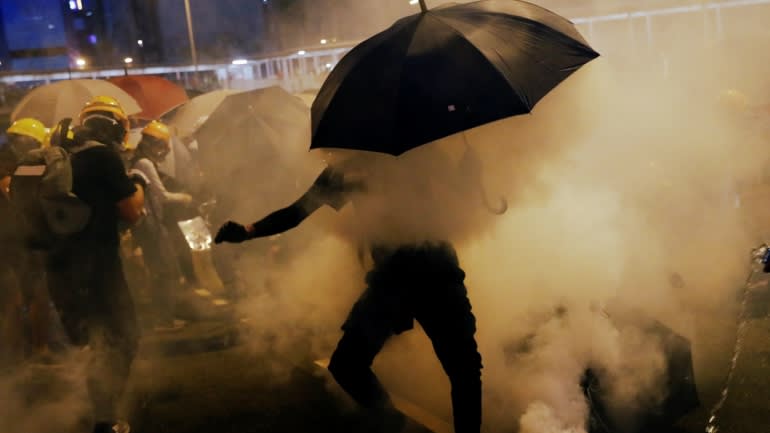 Pro-democracy protesters use umbrellas to protect themselves from tear gas during a protest near China's Liaison Office in Hong Kong on Sunday.   © Reuters

The news conference was held amid escalating demonstrations around the city in recent weeks, which included the targeting of the Beijing delegation's headquarters in the city.

On July 21, demonstrators slapped black paint on the Chinese national emblem above the entrance, spray-painted profanities and provocative slogans on the walls and pelted the building with eggs.

Last weekend, protests went ahead in different parts of Hong Kong without police authorization, and security forces deployed tear gas, pepper spray and rubber bullets to disperse the crowds. More than 50 people were arrested and dozens of people, including journalists were injured.

A survey conducted July 23-25 by the American Chamber of Commerce found that businesses in Hong Kong are already reporting "serious consequences" such as short-term decline of revenue and postponed investments and events. The chamber said in a statement that its members are also concerned that the failure to address the instability and worsening perceptions may lead to "irreparable damage" over the long term.

Meanwhile, Finance Secretary Paul Chan predicted a dim future of Hong Kong's short-term economic growth, due to a combination of uncertain external environment and disruptions caused by the protests and violent clashes.

"These incidents have seriously damaged Hong Kong's international reputation and environment," Chan said on his online blog, as foreign businesses and tourists will no longer consider Hong Kong as a safe place. "the employment and livelihood of ordinary people will be affected in the long run," he said.