City's leader says stepping down an 'easy choice,' but remains committed to job 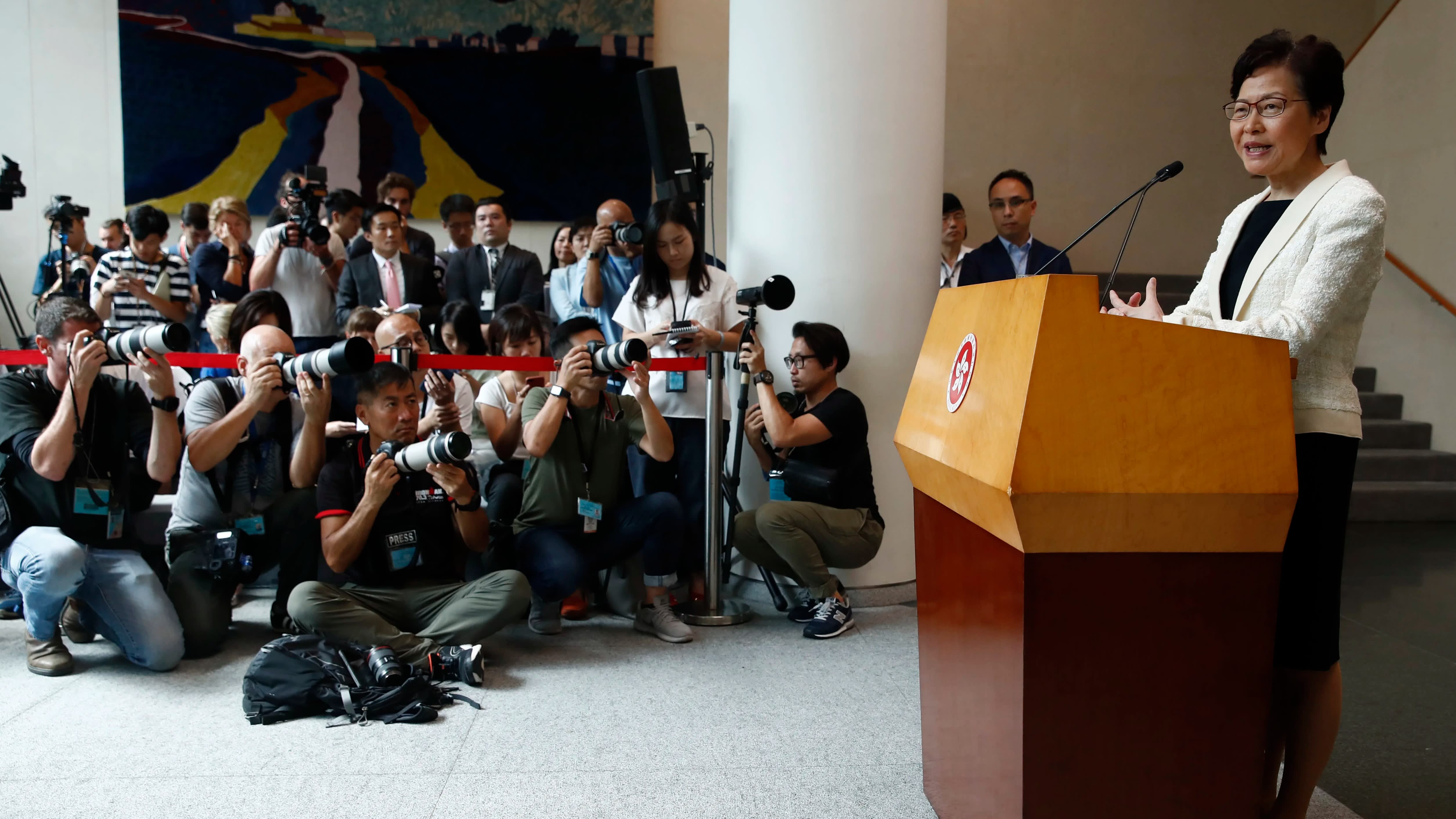 Hong Kong Chief Executive Carrie Lam at a news conference on Sept. 3: "I have never tendered a resignation to the Central People of Government."   © AP

HONG KONG -- Hong Kong's Chief Executive Carrie Lam denied on Tuesday that she had tried to resign as the leader of the city after a leaked recording of a closed-door conversation suggested that Beijing may have prevented her from quitting. Beijing later in the day reiterated its support for Lam and signaled that it would not rule out intervention if tensions in the city escalate.

"I have never tendered a resignation to the Central People of Government," Lam told reporters at a news conference in Hong Kong. "The choice of not resigning is my own," she continued, adding that what she said in private only reflected her feeling as an individual -- not as a leader of Hong Kong.

"I just attempted to explain that as an individual, given the very difficult circumstances, maybe it is an easy choice to leave," Lam said. "But I told myself repeatedly in the last three months that I and my team should stay on to help Hong Kong ... and to serve the people of Hong Kong."

Lam added, "That remains my position."

The chief executive did not deny the contents of the recording, but said she was disappointed that they had been leaked as the remarks were made "in a totally private, exclusive session." She dismissed speculation that the government had intentionally leaked the conversation as a ploy to win public support, calling the assumption "absolutely unfounded."

The comments come as the embattled chief executive has become the least popular of any of the four leaders who have run Hong Kong since its transition to Chinese rule in 1997, according to polling by the Public Opinion Research Institute.

Lam's decision to introduce a controversial extradition bill, which would have allowed suspects to be taken from Hong Kong to mainland China, has triggered months-long protests. Although the bill was suspended, protesters have demanded its withdrawal, Lam's resignation and an investigation into police conduct.

Since the social unrest started in early June, Lam has expressed her desire to remain at the helm. But in a recording obtained and reported by Reuters earlier on Tuesday, Lam said in a closed-door conversation with business groups last week that she would quit if given the choice.

"If I have a choice," she said, speaking in English, "the first thing is to quit, having made a deep apology."

She also said the situation was now out of control and that she had "very limited" room to resolve the conflict.

The Hong Kong and Macau Affairs Office, which comes under China's State Council, Beijing's chief administrative authority, said on Tuesday that they "strongly support" Lam and the Hong Kong police. The office also indicated that Beijing would step in if the city's social unrest escalates further, referring to Hong Kong's basic law which allows it to do so.

"The nature of protests associated with the extradition bill has changed," spokesperson Yang Guang told reporters at the press conference. While describing pro-independence protesters as "rioters" whose actions had been influenced by foreign powers, Yang said that Hong Kong had "reached a critical moment of safeguarding the bottom line of [the principle of] 'One Country, Two Systems'." Yang Guang, spokesperson of the Hong Kong and Macau Affairs Office of the State Council, attends a news conference in Beijing on Sept. 3.   © Reuters

"If Hong Kong enters an emergency situation, nationwide laws could be deployed" in the semi-autonomous region, Xu Luying, another spokesperson, added. She said that deploying Chinese troops to help restore social order in Hong Kong was also part of the Basic Law -- the city's mini-constitution.

The increasingly violent protests had led to 1,171 arrests as of September 2, according to official data.

The protests -- which have now continued for nearly three months -- have spread to include strikes by workers in the transportation sector.

As well as demanding retraction of the bill, demonstrators have added other conditions, such as amnesty for arrested protesters and universal suffrage.