A woman at a protest in Hong Kong on June 13: Businesses there worry about the long-term fallout from the unrest.   © Reuters
COCO LIU, Nikkei staff writerJune 13, 2019 23:41 JST | Hong Kong, Macao
CopyCopied

HONG KONG -- A billion dollar IPO has been called off in Hong Kong in the latest sign that political unrest sparked by a controversial extradition bill is taking a toll on business sentiment in the city.

Property developer ESR Cayman said on Thursday that is canceling its HK$9.76 billion ($1.24 billion) listing "in the light of the current market condition," without elaborating further. The company, which had opened its books for subscriptions last week, was planning to start trading on June 20.

The announcement comes a day after clashes between police and protesters left dozens injured. The bill, if passed, would allow fugitives to be transferred to mainland China and other jurisdictions with which Hong Kong does not currently have extradition treaties.

The unrest has also affected the city's growth outlook for the year, as well as the local stock market.

Chinese developer Goldin Financial, meanwhile, earlier this week abandoned a HK$25 million deposit on a site it won at a government auction last month, saying that "the occurrence of recent social contradictions and economic instability would have [a] negative impact on the growth of Hong Kong commercial property market." 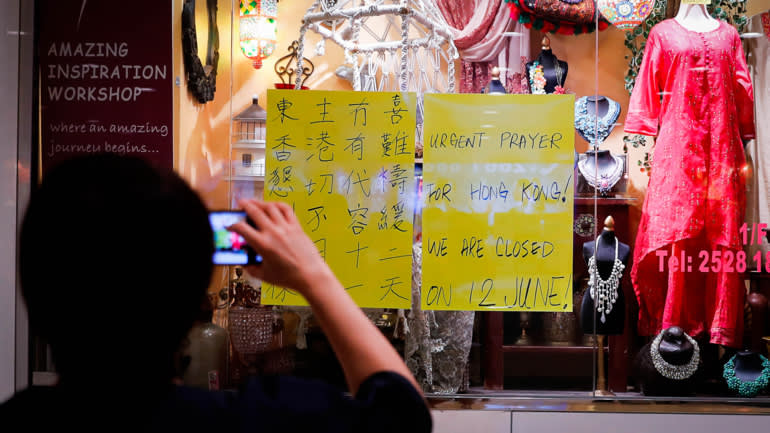 A sign in a shop window in Hong Kong says the business will be closed on June 12 to support protests against the extradition bill.   © Reuters

Local businesses have voiced varying levels of concern, particularly regarding the long-term fallout.

"Most businesses are concerned, both local and foreign, particularly those doing business with the mainland," said George Cautherley, who runs a medical company in Hong Kong. Although passage of the bill, which is widely expected, may not immediately trigger a massive departure of foreign businesses from Hong Kong, "that might happen if there are some actual rendition/extradition cases and the trials are seen to be unfair," Cautherley said.

"It might deter new businesses from coming to Hong Kong, as this issue will be seen as one of the negatives in their decision-making process," he added.

Economists from Natixis Asia Research were even more downbeat in their assessment of the situation. "The recent social protest against the extradition law brings uncertainties to the political environment surrounding Hong Kong," which, coupled with economic headwinds from the U.S.-China trade war, could take a toll on growth for 2019, the economists warned in a report on Wednesday. The report projected that the city's growth could fall to 2% this year, down from 3% in 2018.

The Hong Kong General Chamber of Commerce issued a statement on Thursday urging the government "to continue to listen to stakeholders and engage in meaningful dialogue with the public."

"The business community is concerned about the way things are developing," Shirley Yuen, the chamber's CEO, said. "We call for restraint from all parties to ensure that this issue will not undermine business confidence in Hong Kong and our international reputation."

Several of region's biggest financial players, including HSBC, MUFG Bank and Nomura, told Nikkei that the demonstrations have not disrupted their day-to-day operations. While most declined to comment on the bill itself, Daiwa said, "We will adapt to any decisions made by the Hong Kong government. This isn't anything like Brexit, which would have a real impact on our business in terms of loss of a passport, or a license to provide services in the continental European markets."

Steve Vickers, CEO of risk consultancy Steve Vickers and Associates, however, said some companies are preparing for the worst.

"There is considerable concern ... in the business community arising from the extradition bill," Vickers told Nikkei, adding that "a number of companies have come to SVA for contingency plans in the event of civil disorder on an extended basis arising out of the recent disturbances."

Another expert who specializes in corporate governance at a Hong Kong-based industry group told Nikkei that "some companies are considering to relocate to Singapore" after Hong Kong's decision to reject the visa renewal of a foreign journalist last year raised concerns over freedom of speech in the former British colony. "The proposed extradition law will certainly have an impact on their decision," said the person, who declined to be named due to the sensitivity of the matter.

Businesses located near the scene of the protests have felt a more immediate impact.

Hong Kong's Pacific Place -- a luxury shopping mall owned and managed by conglomerate Swire Properties -- remained closed for a second day on Thursday as protesters continued to gather at Admiralty district, where both the mall and the main government building are located.

Simon Ling, owner of an electrics store in Admiralty Centre, told Nikkei that the mass protests have cost him thousands of Hong Kong dollars because he had to close the shop on Wednesday.

"I was concerned that some people might vandalize my shop. That would be very troublesome," Ling said, adding that he hopes the current political tensions over the extradition law do not result in further violence. "We have rent to pay."

Also at risk is Hong Kong's tourism industry, one of the city's major revenue generators. The current turmoil -- which resulted in 81 injuries as of Thursday afternoon as police fired rubber bullets, tear gas and pepper spray to disperse crowds -- has raised alarm among travelers. Even before the mass protests turned violent, authorities in Taiwan and elsewhere said they could issue a travel warning for Hong Kong if the extradition plans are not abandoned.

William Cheng Kai-man, chairman of Magnificent Real Estate, however, is cautiously optimistic. He said bookings at the seven Hong Kong Hotels that the company operates remain stable in June, but that they will closely monitor the situation. "Unless the street disturbances repeatedly happen with escalation, I don't think there is much adverse effect," he said.

Nikkei staff writers Mitsuru Obe and Eri Sugiura in Tokyo and Nikki Sun in Hong Kong contributed to this report.