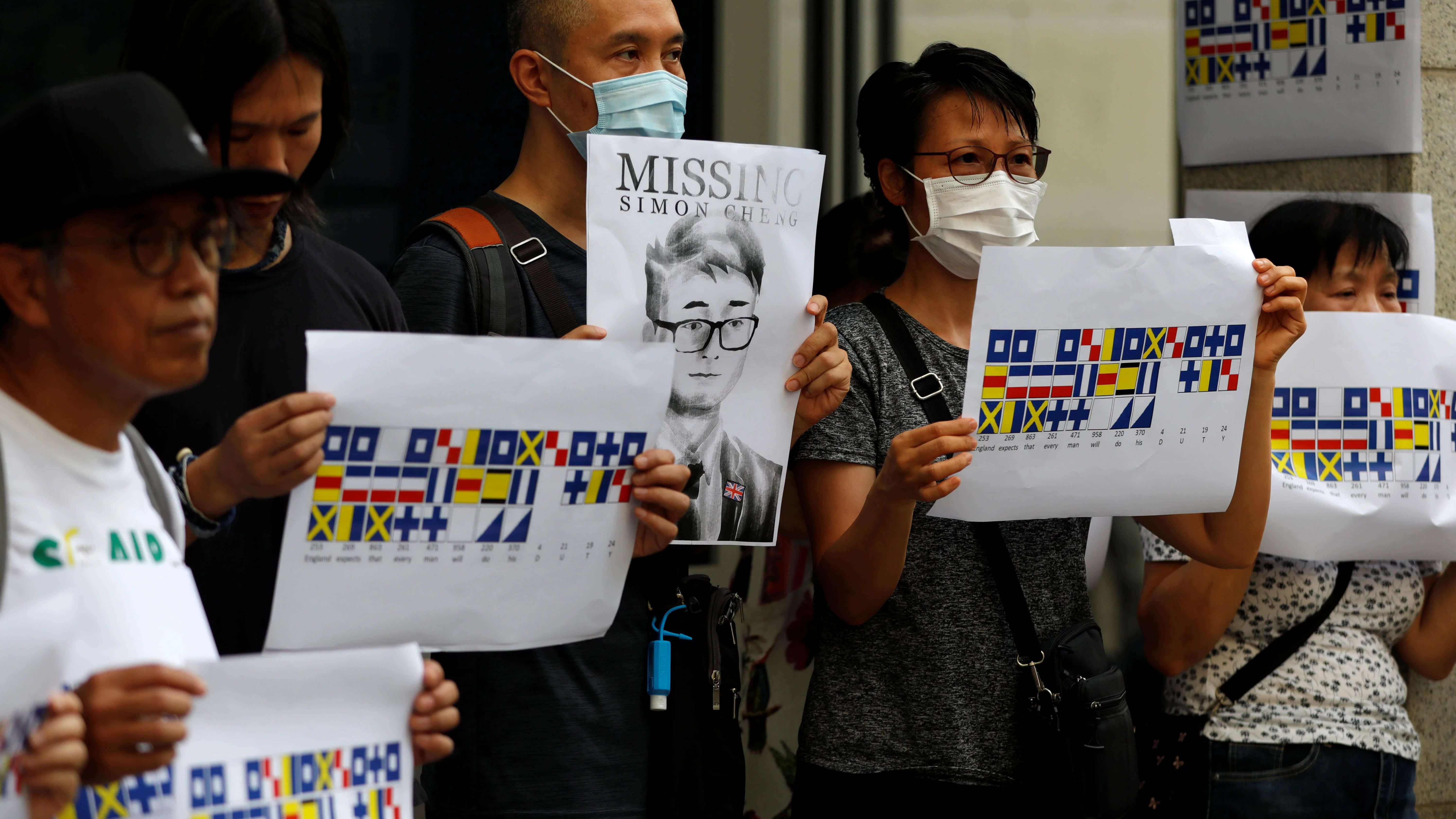 A demonstrator holds a poster of Simon Cheng, a staff member at the British consulate who went missing on Aug. 9 after visiting the neighboring mainland city of Shenzhen.   © Reuters

The offshore airport and the roads and railways leading to it were operating normally despite plans by protesters to implement a "stress test" of transport links and disrupt traffic after weeks of unrest in the Chinese-ruled city.

Authorities had taken out a court order to prevent demonstrations at the airport, which was forced to close for part of last week after protesters thronged the main terminal for several days, grounding around 1,000 flights and occasionally clashing with police.

The MTR subway stations were closed around Kwun Tong, a densely populated area on the east of the Kowloon peninsula, but thousands packed the streets, most carrying umbrellas against the sun despite hazy skies in the former British colony.

Some protesters sat on the ground to stop metal gates closing Kwun Tong station itself as others berated staff for shutting down the trains.

"Shame on the MTR," some shouted. Others complained about increased surveillance. Station shops were closed.

The protests, which began as opposition to a now-suspended bill that would have allowed suspects to be extradited to mainland China, have swelled into wider calls for democracy, plunging the city into an unprecedented crisis and posing a direct challenge for Communist Party leaders in Beijing.

Demonstrators say they are fighting the erosion of the "one country, two systems" arrangement that enshrines a high degree of autonomy for Hong Kong since it was handed back from British to Chinese rule in 1997.

British consulate worker Simon Cheng was detained for 15 days for violating public security management regulations, police in Shenzhen, across the border from Hong Kong, said on their Twitter-like Weibo account.

Police said Cheng was released as scheduled on Saturday and that his legal rights and interests had been observed. They also said Cheng had confessed to accusations against him, a commonly used comment by Chinese police, even though Cheng was not given a chance to defend himself in court.

Cheng had now returned to Hong Kong, his family said on his Facebook page.

No details were given of his detention, with the Facebook post asking the "media and friends to give them some time and space, and we will explain more later".

Some protesters in recent days had demanded Cheng be released.

The rail shutdown by the MTR Corporation comes after the rail operator, which runs a network of lines throughout the city, was criticised in Chinese state media, including the People's Daily, the Communist Party mouthpiece, for allowing "rioters" to get away on trains after clashes with police.

The MTR had also said in a statement on Friday it had been granted an injunction to prevent protesters from disrupting train services. The operator also said that, if "fights, vandalism or other acts of violence occur", train services at affected stations could be stopped immediately.

Some online protester messaging groups, however, said they might still walk to the protest site or mobilise elsewhere.

"It's unreasonable that they stop the MTR service ahead of the protest," said Louis Wong, a protester in the area.

At the airport, all those seeking to enter the terminal had to show valid boarding passes and passports. Train stations feeding the airport, as well as roads to it, were largely clear early on, with a light police presence along some access routes.

There is no sign of a let-up almost three months after the demonstrations began. On Friday night, thousands of chanting protesters formed human chains around the city in a peaceful protest dubbed the "Hong Kong Way".

Organisers said 135,000 people took part in the demonstration, inspired by one in 1989 when an estimated two million people joined arms across three Baltic states in a protest against then-Soviet rule that became known as the "Baltic Way" or "Baltic Chain".

Authorities have so far refused to meet any of the protesters' five key demands, including calls for an independent inquiry into police brutality, a full withdrawal of the extradition bill, and full democracy.

Organisers are planning a host of protests in the coming weeks including a mass march, a city-wide strike and class boycotts at universities.