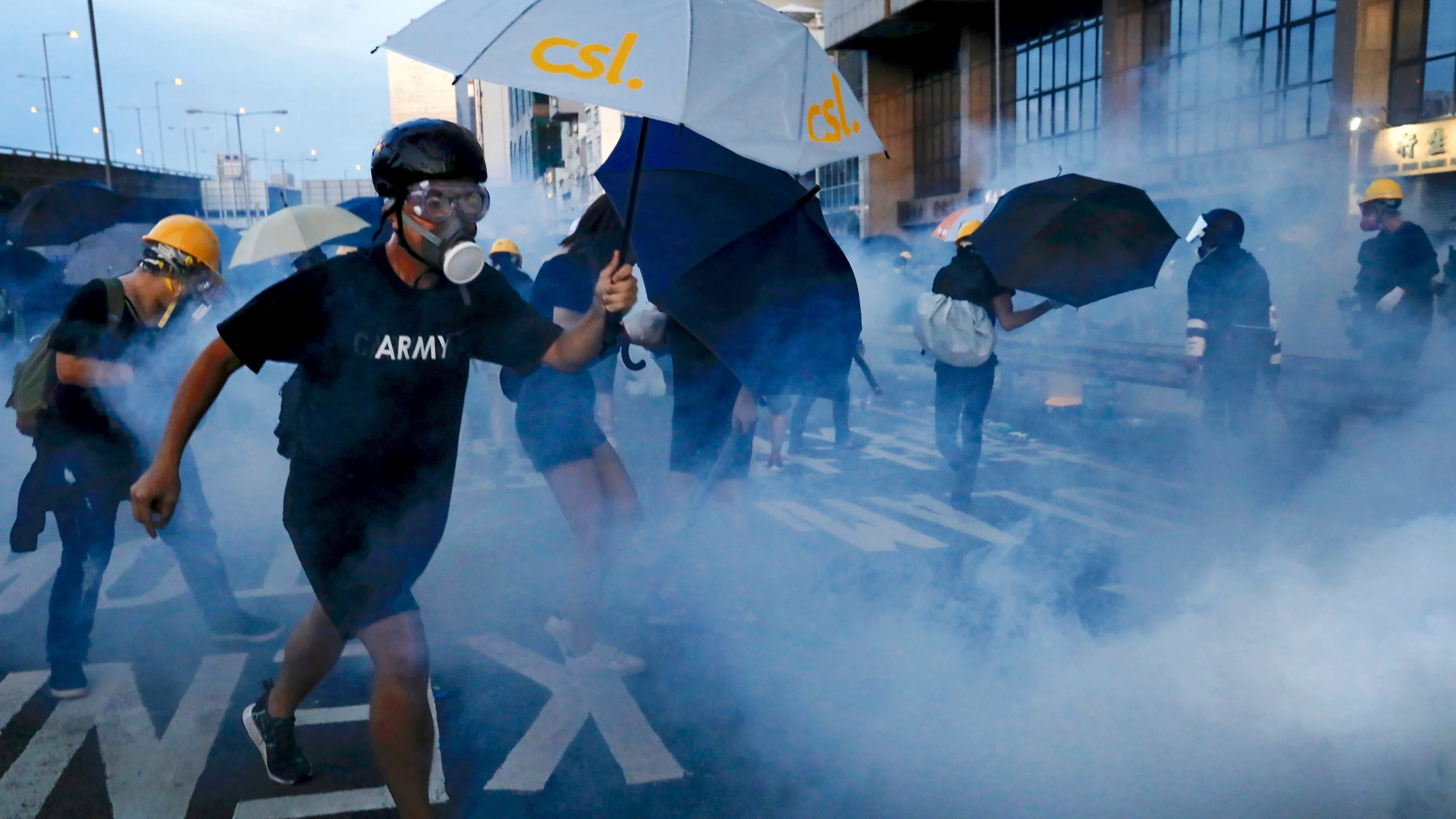 Protesters react to tear gas as they face off with riot police in Hong Kong on July 28.   © AP

The Hong Kong and Macao Affairs Office decided to break its silence after weeks of protests, triggered by a proposed extradition bill, plunged key districts of the Asian financial center into chaos.

Here are five things you need to know.

What is the Hong Kong and Macao Affairs Office?

The office is a top administrative agency under the State Council, China's cabinet. Led by Zhang Xiaoming, who previously headed Beijing's representative office in Hong Kong, the agency is responsible for implementing the central government's policies in the two special administrative regions.

Why is Beijing speaking up now?

The continuing unrest in Hong Kong and the city government's failure to resolve the situation were trying Beijing's patience.

Since an estimated 1 million Hong Kongers took to the streets on June 9 to protest the planned legislation, which would have allowed extradition to the mainland, the central government has left the handling of the demonstrations to the city administration of chief executive Carrie Lam. But Lam has been unable to stop the demonstrations, even after declaring the extradition bill "dead."

Most significantly, the protesters on July 21 targeted the Beijing delegation's headquarters in the city. They slapped black paint on the Chinese national emblem above the entrance, spray-painted profanities and provocative slogans on the walls and pelted the building with eggs. The national emblem on the Chinese Liaison Office in Hong Kong is covered with black paint after a protest on July 21.   © Reuters

What did the agency say?

Yang Guang, a spokesman for the Hong Kong and Macao Affairs Office, voiced support for the city's police and leadership while denouncing the violence of some protesters.

"The central government firmly supports the leadership of Chief Executive Carrie Lam, firmly supports the strict law enforcement of Hong Kong police, as well as supports the punishment of criminals by relevant departments in accordance with the law," Yang Guang, a spokesman for the office, told reporters in Beijing.

Yang also blamed "irresponsible figures" in the West for "stirring up the trouble in a bid to contain China's development."

However, much of the briefing was spent reiterating Beijing's stance, such as the importance of "one country" over "two systems" in Hong Kong's political framework. But the tone of the officials was softer than in recent editorials in state-backed newspapers.

Willy Lam, an adjunct professor at the Chinese University of Hong Kong, described the news conference as "unexpectedly mild," as there was no mention of People's Liberation Army deployment in the city.

What about the possible deployment of Chinese troops?

China assumed control of about 20 military bases in Hong Kong when the British withdrew in 1997. One is located just a block away from the Hong Kong government headquarters. An estimated 6,000 PLA troops are based in the city, while thousands more are stationed around the neighboring city of Shenzhen.

Until now, the forces in Hong Kong have virtually never been seen outside their bases. The PLA deployed to the streets of Macao for the first time in 2017, where they helped clean up after the former Portuguese colony was hit by a devastating typhoon.

But Yang sidestepped the questions relating to this in Monday's news conference. Yang Guang of the Hong Kong and Macao Affairs Office of the State Council attends a news conference in Beijing on July 29.   © Reuters

What can be expected now?

While the protesters have been turning out in smaller numbers in July, the intensity of the demonstrations has increased.

Most worrisome for Beijing may be recent signs of discord among the local authorities. Late last week, after Chief Secretary Matthew Cheung apologized for the delayed police response to an apparent attack by gangsters against protesters returning home on a train, police unions and officers accused Cheung of undermining them.

Meanwhile, more than 300 elite members of the civil service signed petitions calling on the government to meet some of the protesters' demands. Some civil servants are planning their own rally on Friday, and at least 400 have indicated they will participate, the organizer said.