The closure spread jitters in Southeast Asia's tourism-oriented countries such as Thailand and Singapore, as it disrupted Hong Kong residents' plans to go abroad. It also forced connecting travelers to cancel or alter their plans.

If the disruption persists, the negative effects on Southeast Asian economies will accumulate. Hong Kong International Airport is one of the world's busiest aviation hubs. Over 75 million passengers used it in 2018. Travelers from the Americas, Europe and other parts of world stop in Hong Kong on their way to Southeast Asia.

Although this only accounts for 1.2% of the total arrivals to the bloc, Hong Kong residents' spending habits make the economic impact significant. Thai government data shows that the average visitor from Hong Kong spent more per day in Thailand than did Singaporeans, Chinese, Japanese or Americans.

A research arm of Thailand's fourth largest bank, Kasikorn Research Center, estimated on Tuesday that Southeast Asia's second largest economy could lose 1.4 billion baht ($15.4 million) if the hub is shut for seven days. "We will lose up to 30,000 visitors," said the research company, warning that August is high season for Hong Kong people to go on summer vacations.

Just over a million tourists arrived from Hong Kong to Thailand in 2018, representing 2.65% of total visitors from around the world. Their expenditures totaled 42 billion baht. Tourism accounts for 20% of Thailand's gross domestic product.

In 2018, 1.6 million visitors to Thailand came from the Americas, and 6.7 million from Europe. Many caught a connecting flight in Hong Kong. But a prolonged closure of this key hub would act as a roadblock. 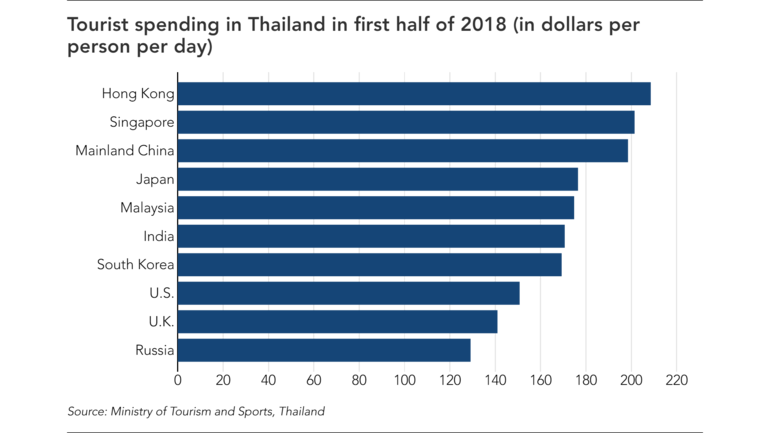 Michael Chiam, tourism lecturer at Singapore's Ngee Ann Polytechnic, told the Nikkei Asian Review that Southeast Asia's inbound tourism sector will be affected because of "the unpredictable schedule of flight."

He said the impact is not only about visitors from Hong Kong, but also international travelers transiting at Hong Kong on their way to Southeast Asia. "There are people who transit through Hong Kong. Those people will be affected as well," he noted.

Chiam said Hong Kong travelers are above average in terms of spending. "Many Hong Kong tourists are experiential tourists. A lot of these people are educated and IT savvy. They plan their own trips. If they go to [other] countries, they like to avoid the main tourist things. They also like to experience the local culture and local foods."

Protests against a now suspended bill to allow extradition to China has gripped Hong Kong since June. Actions by irritated protesters have grown increasingly violent recently.

Since Aug. 9, they have repeatedly occupied the airport, blocking access to check-in desks and immigration checkpoints at one of the busiest air hubs in the world. This caused over 600 inbound and outbound flight cancellations on Monday and Tuesday.

Wednesday's partial resumption will still leave nearly 100 flights grounded. Reportedly, a court order has ruled that protesters may only act in designated areas of the hub. However, whether protesters plan to return and resume their actions at the airport in the future remains unclear.